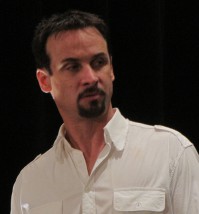 Wrong!  Actually, GateWorld is bringing you the same amount of coverage we did last year — we just did it this year with a fraction of the manpower.  Combined with the fact that the convention this year was one of Creation’s largest ever, and you can begin to understand why the reports have come slowly.  Like an Ancient repository of knowledge, we just couldn’t process all the information we were receiving immediately!

So — without further delay — let’s take a look at what Day 2 of the Vancouver con had to offer.

The day began with a visit from Andee Frizzell (“Wraith Queen”).  Frizzell, who also celebrated her birthday over the convention weekend, talked heavily about what it was like working with a massive amount of facial prosthetics.  In fact, when Atlantis held its end-of-season “wrap party” for Season One, no one knew who she was because make-up application times required her to be at the studio so much earlier than the main cast.

She did, however, take away fond memories from her time on the series.

“It was a great show with great characters,”  Frizzell said.  “I really enjoyed playing the Wraith Queen.  It was fun being on set, and I know the cast enjoyed having someone to play practical jokes on!”

Later in the day, attendees were treated to an appearance by Colin Cunningham.  Cunningham hung around the convention for most of the weekend and was a bundle of energy throughout.  During his stage appearance, a fan asked why “Paul Davis” always maintained the rank of Major, and was never promoted.

While joking around, Cunningham stated he was just happy that he kept being invited back.  The actor is currently working with director and Sanctuary executive producer Martin Wood on developing the short film he wrote and directed, Centigrade, into a possible series.

Before the day was done, fans also got some time with stunt coordinator James Bamford, who discussed some of the aspects of and recent sequences he’s choreographed in the stunt business.

The day didn’t end there, however.  Creation’s cabaret brought back Colin Cunningham and James Bamford to the stage later in the evening.  Cunningham performed an amazing mentalism show with two very difficult — and potentially damaging — feats.  Bamford took the stage a bit later with his stunt team, but not before taking the mic and launching into a couple of impromptu acoustic rock songs.

Finally, after the cabaret, Dan Shea (“Siler”) entertained people as the host of a karaoke party, which lasted into the wee hours of Saturday morning.