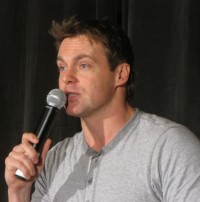 Day 3 of Creation Entertainment’s Official Stargate Convention in Vancouver brought actors from both Stargate SG-1 and Atlantis to the Metrotown Hilton in Burnaby, British Columbia, and proved to be another exciting and fun-filled day for those attending.

The morning, which for some started early with an optional stunt workshop being held by James Bamford, began with an appearance by Steve Bacic (“Camulus”). Bacic delighted fans with stories about his time on SG-1, and also took time to answer questions from fans.  A con-goer asked whether or not Bacic liked science fiction or if acting in genre productions was just a job.

“Of course, I was … experimenting … then,” he added with a grin.  He also noted that he throws himself into every role he does and as never viewed acting as “just a job.”

Always a fan favorite, Michael Shanks (“Daniel Jackson”) took the stage next.  He fielded questions about his time on SG-1 and also on Stargate Universe, as he has already filmed three appearances on the freshman series to date.  Shanks also discussed his role as Hawkman on the CW series Smallville, and confirmed he’ll be back on the superhero series for its season finale.

Shanks’s Q&A session also became somewhat of a joint session as his wife and SG-1 co-star Lexa Doig (“Carolyn Lam”) got in on the fun via the magic of Twitter.

Christopher Heyerdahl (“Todd”) took the stage after Shanks, a delight for fans as Heyerdahl’s busy work schedule has precluded him from — and in some cases forced him to cancel — various convention appearances in the past.

When asked about how is involvement in the “Twilight” phenomenon has changed him, Heyerdahl was honest.

“I love being a part of it all,”  Heyerdahl said.  “It’s an unstoppable force!  I love how it’s created such a passion in people!  I’m living a dream and its alot of fun.”

Heyerdahl, who also spoke about his time on both Atlantis and Sanctuary, noted that he will not be seen in this summer’s Twilight sequel film, Eclipse.  He is confident, however, that if the screenplay remains true to the book, he will be seen again in the feature film versions of the final book in the series, “Breaking Dawn.”  The project has already been announced as a two-film event.

A highlight for many over the weekend was the joint appearance of Flanigan and Hewlett.

The rest of the day was dedicated to Atlantis as both Joe Flanigan (“John Sheppard”) and David Hewlett (“Rodney McKay”) took the stage — first seperately, and then together.

Flanigan noted the differences between working on genre series like Stargate and other roles which are more contemporary.

“Acting in sci-fi shows is much harder than acting with regular material,” Flanigan said.  “It takes more talent to make certain situations more believable, and I had to work harder on Atlantis than I ever have in my career before.  I’m very, very proud of the work we did on Atlantis.”

Hewlett’s solo time on stage was largely dominated by questions about his iconic Atlantis role.  When asked how he prepared for his emotional turn in Season Five episode “The Shrine,” Hewlett said that it was easy.

“I love episodes that are written by Brad [Wright],” he said.  “They are everyone’s episodes.  He’s just good at writing group episodes.”

Hewlett also noted that life imitated art in the pier scene in “The Shrine,” as the beer was real and Flanigan was “totally wasted.”

The two then took the stage as a duo and delighted fans with another half-hour of fun and ribbing before coming to a close, and a dessert party featuring several actors followed later in the evening.

Keep looking to GateWorld for coverage of the final day of the convention along with news items, interviews and more accumulated during the four-day event!