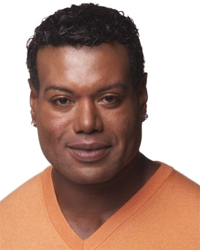 Last month we updated you on Christopher Judge‘s hopeful television series Rage of Angels, which has been moved from MGM to Starz Media for development (story).  Judge — Stargate SG-1‘s Teal’c — is writing, producing, and starring in the new fantasy series.

That news was based on comments made by Judge last fall, so today we were happy to see a brand new interview with the actor/producer in which he confirms that the wheels of pre-production are still turning.

“I’m partnered with the lovely Bill MacDonald, who created Rome,” Judge told Earth’s Mightiest. “We’re just finishing up doing the bible for the series and hopefully we’ll be to camera by the fall.”

As previously reported, the series follows the archangel Gabriel (played by Judge), who hunts other supernatural beings after being sent to Earth.

“One of the things that’s most oft-missed is that angels, when they take human form, should be subject to all the temptations we are subject to.  I’m a true believer that what keeps us from anarchy is the fact that the majority of us believe that our souls have to answer to something once these physical vessels are exhausted.  So if you don’t have that burden, what keeps you from doing whatever the f— you want to do?  Nothing.

“That’s one of the things we are going to explore in this series.  What is it like for these archangels that come to earth, who have these tactile sensations that are new to them — how does that affect them?  And what really is the difference between good and evil?”

Meanwhile, Judge will appear in MacDonald’s remake of “The Saint,” set to go before cameras this June.  He’ll also appear alongside Kevin Sorbo (Andromeda, Hercules) in the movie Paradox, set to be released later this year and the first of a possible trilogy, according to Comic Book Movie.  Watch for a trailer this summer at Comic-Con.

Judge also confirmed that the next SG-1 movie is waiting for MGM to work out its financial crisis — though he is concerned that the studio may find it harder now to get the whole cast back together.

“I don’t know how they’d ever get everybody back together again other than throwing heaps of money at us,” he joked.

Visit Earth’s Mightiest now to watch the full, 5-minute interview!  (Beware of strong language.)  We’ll keep our ears open for more on Rage of Angels as it makes its way to your TV screen.

(Thanks to Ed Gross and Madwelshboy for the tip)

Oh wow, that was a really bigoted statement about materialists from Christopher. I really hope that was a misquote.

“I’m a true believer that what keeps us from anarchy is the fact that the majority of us believe that our souls have to answer to something once these physical vessels are exhausted. So if you don’t have that burden, what keeps you from doing whatever the f— you want to do?” The knowledge that anarchy would ensue if people did not behave in manners conducive to societal integrity, such as by abiding the governmental laws that we have to answer to if we do whatever illegal thing we want.. That said, I look forward to watching the show, it… Read more »

i’m super glad the sg1 movie is just waiting for mgm to clean up their stupid financial mess… now hurry the heck up, mgm!! :p

@Gaeth, it said that he was joking. Not to mention, getting an entire cast and production team together after hiatus really does take a lot of money so he wouldn’t be far off the mark. Nobody is in it for charity.

@Gaeth: I’m a believer turned materialist – my faith just wasn’t strong enough to handle the ugliness of reality – and I don’t see anything wrong with his comment.

Wasn’t Shanks producing this too? Or was that something else…

@caramelmonkey: Chris did say that he wanted Michael Shanks to play Lucifer. I think it’ll depend on scheduling/money/Starz willingness…

@SciFiForLife. 1) That isn’t funny. Even as a joke it would be blatantly wrong and should be called out as such. 2) His statement has nothing to do with “getting an entire cast and production team together after hiatus” nor does it have anything to do with not being a charity. It was entirely unnecessary and false. @katikatnik That’s all well and good. I’m not a materialist and I did find something wrong with his statement. I know many materialists and they are some of the most ethical and trust worthy people I’ve met. On the other hand I’ve known… Read more »

“I’m a true believer that what keeps us from anarchy is the fact that the majority of us believe that our souls have to answer to something once these physical vessels are exhausted. So if you don’t have that burden, what keeps you from doing whatever the f— you want to do? Nothing.”

What keeps me from doing w/e I want ? Moral values ! How could you say something like that…I know the USA is full of in-fairy-tales-believing ppl, but why you ? :(

@Gaeth Maybe you can explain to be how his statements were naive and absolutely false. I thought at best he is being presumptuous and taking liberties with the hypothetical, but I completely missed the part where he says that materialists are somehow amoral. I took his comments to relate to people of faith acting the way they do because of their beliefs, or need for a higher power in their lives. I read that and then was completely surprised that he somehow offended the opposite group of people. Maybe this conversation is all in good fun, but it seems like… Read more »

Why dont we all just stop procrastinating about a show we know very little about. If it gets made, Great, but in the fickle TV industry, a Pilot means diddly squat, unless its a good pilot.

@RemyMichael I already have explained it, but I shall go into further detail: “I’m a true believer that what keeps us from anarchy is the fact that the majority of us believe that our souls have to answer to something once these physical vessels are exhausted.” Here he says, in other words, that if it were not for the belief of an afterlife where our consciousness /souls are held accountable -i.e. punished, rewarded etc- that we would have “anarchy”. Anarchy literally means ‘no government’ but it also means no social order and lawlessness. You might be able to say that… Read more »

@Gaeth: They’ve all moved on to other things and have other opportunities to choose between. The network let them go because of money, why would they make their decision of whether to come back for any other reason? They all seemed to have enjoyed the experience enough to where they’re interested in considering it if the opportunity arises, but why would they turn down something that’s offering more for it if they’ll just be cast aside again once it’s over? Christopher Judge’s career has come a long way and he’s just acknowledging it. @Hazor & CZEKing: I think you’re missing… Read more »

@mythos: That has absolutely nothing to do with anything I said.

As to your replies to the others, I’m not going to bother getting bogged down about arguing over whether morals are relativistic, situational, absolute, objective, or whatever. I will say this though, the fact that people have different perceptions on a thing/idea/whatever does not mean that thing is subjective.