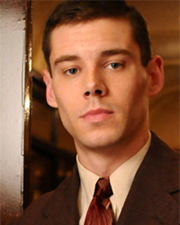 Back in November we told you that Stargate Universe actor Brian J. Smith had been cast in Murder on the Orient Express, the newest movie in the Agatha Christie’s Poirot series starring David Suchet as the eponymous detective (story).  We’ve known for some time that it will air tonight, Sunday, July 11 in the U.S. … but we’ve been waiting for ITV in the United Kingdom to announce its own air date.

Now the U.S. premiere of the film has arrived, while ITV still hasn’t announced a date more specific than “Summer 2010.”  (We even contacted the network this spring, but it hadn’t been scheduled yet.)  Ah, well.

Tune in tonight at 9 p.m. (8 Central) tune in to PBS’s Masterpiece Mystery series to see the latest installment in the Poirot series.  (Check your local listings to confirm the time, since PBS stations don’t always conform to the same national broadcast schedule.) Watch the teaser video here.

Smith plays Hector MacQueen in Murder, which he filmed in London during SGU‘s fall hiatus.  The movie is directed by Philip Martin, based on one of Agatha Christie’s most popular novels.  The script adaptation was written by Stewart Harcourt.

Here’s how ITV describes the story (beware of SPOILERS if you haven’t read the novel, or seen a previous adaptation):

Hercule Poirot is visiting Istanbul, having solved a complex case for the British Army, when he witnesses an act of brutal justice on the streets. Relieved when a new case calls him back to London, Poirot’s old acquaintance Xavier Bouc, director of the Orient Express, secures him a last minute ticket. Among the eclectic range of passengers are Princess Dragomiroff and her nervous maid Hildegard Schmidt, English Governess Mary Debenham and Swedish missionary Greta Ohlsson.

During his journey on the Orient Express, Poirot is approached by ruthless American businessman Samuel Ratchett who offers him ten thousand dollars to watch his back, but Poirot refuses. Poirot awakes the following morning to find the train stuck in a snowdrift and Ratchett dead in his compartment.

Aided by amateur sleuth Dr Constantine, Poirot examines the murder scene and finds a proliferation of clues pointing in opposite directions. He interviews those who last saw Ratchett alive: his manservant Edward Masterman, personal assistant, Hector MacQueen, and conductor Pierre Michel, before realising the true identity of Samuel Ratchett. The evidence seems to point to a mysterious assassin who got on and off the train but Poirot is not convinced. Isolated by the snow and with civilisation falling apart Poirot makes a decision that will change his life forever.

Before you watch, don’t miss a new interview with Brian J. Smith — all about his Poirot experience — over at Show Patrol!

Thanks for posting this info. I’ve been impressed with Brian J. Smith on SGU and was curious to see him in another role. I’d never seen or read Murder on the Orient Express before and was surprised with how much I enjoyed the movie.

Great story, with some pretty heavy themes for a murder mystery. The ending is especially good, I think, because it’s less about who did it and more about how Poirot, the detective, reacts when he finds out.