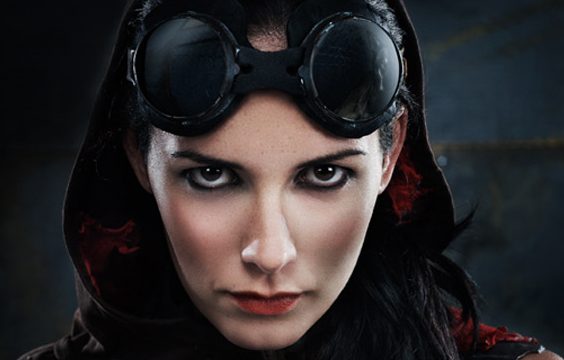 Last year Riese grabbed the attention of science fiction and television fans all over the world. The short-form Web series told the story of a wanderer and her wolf companion in a decaying land, who are targeted by the new Empress and a group of religious zealots.

Or at least it started to, before producers pulled it off the Internet and announced that a new deal for its release was in the works. As it turned out, Syfy Channel was interested. This month, that plan comes to fruition.

Riese: Kingdom Falling will premiere online at Syfy.com/Riese on October 26 at 12 p.m. Eastern time. A new episode of the 10-part series will be released online every Tuesday and Thursday.  Episodes will also be available on Sony’s PS3, Microsoft’s Xbox, and Amazon.com.

Here’s how the network describes the story:

Eleysia is a dying kingdom where resources are dwindling and compassion is fading. Distrust and anxiety have clouded people’s minds, causing a regression into primitive ways of thinking. People have grown restless, almost feral. Rituals and mythology have resurged, and the darker side of mankind has begun to reveal itself.

Riese (Christine Chatelain), a wanderer, travels across the decaying lands of Eleysia with her wolf, Fenrir. Marked as a heretic by religious group The Sect and the new Empress, Amara, Riese must evade their assassins and discover their true intentions for Eleysia.

Riese is the Crown Princess of Eleysia, forced to flee into the wilds after her family was slaughtered. She will soon serve as a catalyst for a disparate group of supposed heretics, the Resistance, launching them into civil war.

The new Web series also will be narrated by Amanda Tapping (Samantha Carter).

Each episode will run around seven or eight minutes.

“We saw Riese and thought they had done just an amazing job, and then we were able to give them some resources and bring Amanda on board to really help them take the series to the next level,” said Craig Engler, Senior Vice President and General Manager of Syfy Digital. “I think new and existing fans will love the relaunch of the series on Syfy.com and enjoy all the new additions.”

Riese: Kingdom Falling is distributed by Fireworks International, the television and digital distribution arm of ContentFilm plc. Check out the show’s official Web site at RieseTheSeries.com, and on Syfy.com!

Looks interesting, and it fills the missing fantasy gap on the telly today, plus addding a steampunk twist to it.

Fenrir though? I wonder if that is a discrete reference to ‘The Wolves of Fenric’… :)

In Norse mythology Fenrir is a wolf, the son of Loki foretold to kill Odin during Ragnarök.

I only retain a few scraps of memory of the Eddas, so it seems that I missed the original reference for the basis of ‘The Wolves of Fenric’ as well, until now.