Tonight Stargate Universe passes the mid-point of its fall season, with the premiere of “Trial and Error” (9 p.m. on Syfy). From everything we’ve seen and heard it looks to be an episode that will catapult the show forward in its mythology and story arc. In a new interview with Syfy Channel’s Blastr, SGU executive producer Brad Wright talked about the rest of the fall season — and let some tantalizing spoilers fly.

If you haven’t seen the aired episodes or don’t want to know anything about what’s coming up, turn back now!

“I feel like the show has never been better and that there are folks who are digging it,” Wright told the site. “The first 10 are just terrific. Obviously I’m proud of everything, but we did listen to some of the criticisms earlier on and worked on increasing the pace and increasing the adventure of the show, without changing the show entirely.”

In “Trial and Error,” Colonel Everett Young (Louis Ferreira) sees Destiny attacked and destroyed over and over again.  He’s been plunging toward rock-bottom for weeks now (especially since the mercy killing of Sgt. Riley), and in tonight’s episode he’ll finally hit it.

Ferreira’s performance in the episode is “Emmy-worthy,” Wright said. “He is brilliant in this episode, and honestly, the scene with him and Scott at the end is just … Louis is an amazing actor.”

And later in November …

THE GREATER GOOD. We learned early on that this season would bring a revelation about Destiny‘s original mission. Why was it launched by the Ancients more than a million years ago? What is of such (pardon the pun) universal importance, and should it matter to those who are castaways on the ship now? In next week’s episode, we’ll find out just what the ship’s mission is. 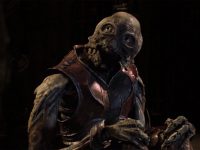 While we may not see the ''Awakening'' aliens in the November 9 episode, Destiny will encounter one of their ships.

“That happens when we find a derelict spaceship that happens to have been the same kind of ship of aliens that we meet in [‘Awakening,’]” Wright revealed. “Now, it’s not occupied, but essentially in the exploration of that ship, Young and Rush become stuck there. They’re trapped aboard the ship together, and Rush has to take extraordinary measures to try to get Destiny to come to their rescue, without revealing the bridge.”

He also revealed that Rush’s secret bridge discovery will be let out of the bag in this episode. Inevitably, this will lead Rush and Young to another confrontation. “And we’ve been trying very hard not to side with one or the other in terms of how we weigh the stories,” the producer said. “They’ve both done equally heinous acts and heroic acts. And in ‘The Greater Good’ they’re forced to come to a head again in a way that is very interesting.”

NEXT: ‘Malice,’ ‘Visitation,’ and ‘Resurgence’

I’d love to see a third season. Stargate Universe has so much more to give but it’s out of my hands. I hope the dream doesn’t die. For the sake of every fan of the show and everyone involved. (I don’t live in America. And I don’t have Sky1 either*)

*I watch the show via On Demand but I don’t think it counts.

I was already excited, but all of these episodes now make me freak out :D
Especially resurgence! I read the rumours somewhere here in gateworld about an alien battle(field), but hell yeah! ^^ I’m hoping ground-battle but I doubt it. Still crazy excited though!

Please give us a show we want to watch.

Sounds great and let’s hope it will let to the SGU season-3!

“Please watch my show,” he said. “I mean, [saying things like] ‘I’m loving the show,’ ‘I downloaded it’ … that does not keep us on the air. Viewers have to watch our show live on the same day, otherwise our television show is going to go away.”

I recall a similar plea was made by the cast of Enterprise, following season was its last….

SyFy fans are annoying. The show is golden, possibly better than SG-1, which lasted for 10 years. Why is it struggling if it is better? Well, because fans like to see explosions and adventure, which is great, but SGU is not being received by the fan base, because they don’t understand what great drama this show is. The season 1 finale was so great, but nobody realizes it.

It’s sad that only live views matter with the way technology has changed how we watch television. Besides doesn’t it only matter if you have a nielsen box or has digital TV made it easier to track viewers now that everyone needs a digital box?

slowley getting better i hope its not too much too late. need to figure how to count on demand im shure theres many more people watching then you think and asking them to watch live wont be enough there has to be a was to count them you just have to be creative

Hey man I would love to watch your show live, but your just up against too many other shows for me to be able to watch it live. DVRs can only do so much There’s so many shows on and they’re always on at the same times on the same days that you practically have to have multiple DVRs just to watch them all. Through Time warner you can record two shows and beyond watching another show that’s already been recording that’s all you can do. Too much competition on Tuesdays, plus commercials just suck no one likes em.

I would love to watch it live.. and help in anyway (I buy the DVDs/BDs) But than you have to make the airing international through a website? SG:U is the best series I have seen so far.

Unfortunately no matter what Brad Wright or anyone else says, watching live does nothing for ratings unless you have a stupid Neilson box in your house. I don’t know anyone with one, and neither does anyone I know, but somehow this super outdated and retarded rating system is supposed to represent everyone in America. I think SGU is the best sci-fi TV has ever seen, and it will be tragic if it goes away because networks refuse to keep up with technology. I don’t even own a TV! Why should I when I can watch everything on my 27″ iMac.… Read more »

I’d love to watch it live, but the 11PM showing I have to go along with because I work until 10pm. It was better when it was on Friday and easier for me.

I’m sure they have made Millions, likely hundreds of millions off of the DVD sales of all Stargate series so far, “can” it and they can kiss goodbye to that income stream as well.
Hopefully the marketing people who came up with the idea of putting this on a Tues night will be sacked and SGU will end up back on Friday night (or a night that will work) again for the second half of the season next year.
There has been plenty of brilliant shows killed off by people making stupid decisions about airing times.

I love the show, but I’m not in US, nor I can see it in syndication. I can’t buy it in DVDs, and I can’t buy it from iTunes. It feels like you see someone drowning behind wall of glass and you can’t do nothing about it.

And this is 21st century technology. TV companies, movie makers, please, wake up. I’m ready to pay nice sum for each ep to get it into nice non-drm h.264 to watch it at home right after live. And please don’t get into bs about syndicating, because there will be still market for it.

Trial and Error, WOW! THIS was a great episode!! I also have to agree with Brad, the scene between Scott and Young toward the end was just amazing. I also Loved the way Greer was pushing Eli to get with the girl… Where was THIS show for the last year and a half?!!!!

@A1ws Take what you said and insert Caprica. That’s exactly how I feel about that show too. We all need to watch live NOW.

Please give us a show we want to watch.
I agree with Uncle Al. You can throw in all the aliens and space battles you want but that doesn’t make any of these characters any more likeable or watchable.

@Pecisk I agree, I’d gladly pay too (I live in scifi neverland far far away.. guess they’ll wake up soon to realise the huge market outside USA). @Xyla I agree, well put: “Wake up people, its almost 2011.”

Agreed personbot. Still not emotionally vested in the characters, cause they really aren’t folks I would want to have as friends anyway. Unlike SG1-SGA characters.

Please give us a show we want to watch.
I agree with Uncle Al. You can throw in all the aliens and space battles you want but that doesn’t make any of these characters any more likeable or watchable.

I’d say to Brad Wright: I found SGU mind-numblingly boring. You shouldn’t have given #SGA to M&M then you’d still have a 1st class show.

SGA wasn´t a first class Show. It wasn´t a real spin off either. It was a different SG1 Version. Ok, I liked it too but it was the most time not so interesting.

The Teaser is really a big one and should be enough for those who dislike the show. I for one like SGU a lot and I hope that it will be on the air for much much more Seasons.

You know that there is something manifestly wrong when people buying shows off of iTunes (where the money likely goes directly to the red pit of MGM bankruptcy) doesn’t help the show get renewed — SyFy is paying for the show and doesn’t see any of the revenue from this growing revenue source. Especially when scifi fans are usually on the forefront of technology, it seems likely that scifi tv shows will just continue to get cancelled because executives don’t realize that their broadcast revenue streams are turning into download revenue streams. I don’t even own a TV, let alone… Read more »

“And we end up basically caught in a war that has been going on between two races.” Now this has gotten me excited, well, somewhat excited. I am curious of what is going to happen. Maybe it’s the curiosity in me. I do hope that up coming episodes get better; sometimes, I find that some of the episodes are a little *yawn* boring. Maybe it’s not my cup of tea, but nevertheless, I’ll still watch it. Once I watch a story unfold (doesn’t matter if the quality is good or bad), well, I have to know what happens. The story… Read more »

I’m finding all the ways to view shows really confusing. If it doesn’t help the show to make it available on On Demand, why do that? If it only counts if you watch it live, does that still hold true if you simultaneously DVR it? What about the whole “if you’re not a Nielsen family, it doesn’t matter anyway” thing?

I don’t post to hate on the current show. I personally don’t enjoy watching it. If others enjoy it fantastic. But pleading for people to watch the show live. I didn’t do that with the other two series. I bought the DVDs.