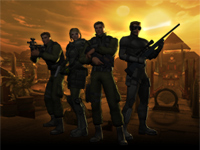 As we told you back in November, MGM opted not to extend the company’s license for the Stargate brand when it expired (story).  While Cheyenne Mountain had laid off its staff and entered bankruptcy proceedings, some of its leadership transferred game assets to a new company — Dark Comet Games — to release Resistance and continue to support it for players.  The move resulted in further litigation against Dark Comet by other CME shareholders (though it did get the first-ever video game based on the 13-year-old television franchise to market).

Dark Comet stopped selling new subscriptions to Resistance in November, and notified players that the servers would have to be shut down after January 15.

There is no offline component of the game for those who have purchased it since the February 2010 release.

The game’s official Web site is now offline, and StargateWorlds.com — official site for the much larger and more ambitious online RPG — has been replaced with a notice to shareholders and this statement to Resistance customers:

As we indicated in our previous announcement, as of January 16, 2011, we are unfortunately no longer able to sell or operate Stargate Resistance. We are actively evaluating options for Cheyenne Mountain Entertainment, Inc. and its products, and will update you as soon as additional information is available. Thank you for your continued support.

Many of the original principals in Cheyenne Mountain still hold out hope that the company can be restarted after bankruptcy proceedings (and the numerous lawsuits surrounding company leadership and the handling of assets).  Any glimmer of future hope for Stargate Worlds and Stargate Resistance, however, would require a restoration of the license by MGM and a not insignificant amount of new investment dollars.

Is this the final chapter in this long and sordid tale?  Stick with GateWorld for any future updates on the state of Cheyenne Mountain Entertainment and the Stargate video games.

They followed the RealtimeWorlds model for MMOs… i.e. not understanding the market place. APB … well, at least it made it to the shelved before it flopped like a ton of bricks. Stargate Resistance … “let’s bash out an FPS and make it online”. Was never going to be a success if you think about it. I’m a big Stargate fan and gamer and this game failed to appeal to me on any level. I’ve said it before, and I’ve said it again. Stargate needs a team-based tactical RTS game. Something like “Star Trek: Away Team”. I want to take… Read more »

I think the game you are talking about was Stargate Alliance. It looked like the best SG game ever attemped, but sadly it was canceled too. :-(
Looked

They should let Valve make a SG game, cuz then it would automatically kick ass. Not going to happen though. RIP Stargate, I hope you will respawn.

I bought resistance back in Febuary and i was so excited for it! I’ve been playing it on and off ever since and it was a brilliant game! Only problems were the lack of new maps and updates etc but this was probably due to the fact that the developers knew from early on it’s days would be numbered. . . i’m very angry to the fact that I paid the money to play it and I enjoyed playing it. It now has been canceled like everything else in the Stargate world and it’s a real shame. Hopefully some sort… Read more »

“This can’t be truely the end for this incredible franchise can it?”

Of course not… that dubious honor goes to the last episode of SGU’s second season, which, unless the producers are able to find another place for the show, will be the last time we see anything SG-related.

That, of course, won’t stop SGU-bashers from believing that SGU’s cancelation will somehow lead to the resurrection of Atlantis or SG-1.

While I was not interested in the game (I’ve played fan games that looked better), it sucks if you purchased it, are they refunding fans since they can no longer play it?

And what’s next for the Stargate badnwagon? Is MGM going to announce that they’re recalling all DVD’s/Blu rays’ from fans?

Tactical game like Jagged Alliance would be awesome if done well. I wish they one day will make it.

We NEED a Stargate game that has gameplay similar to that of Tom Clancy’s Rainbow Six Vegas 2. Squad based team combat with heavy focus on tactical operations. I URGE MGM to approach a REAL game developer such as Ubisoft etc etc and propose a game that has a REAL chance in making it big.

We NEED this. Now more than ever since SGU’s done.

A successful video game series would be cool to continue the story.

I’m sorry, but I have a feeling that Stargate games will wind up just like Babylon 5 games did – after a failed attempt that was canceled (and it was promising too) I think the only way fans will be able to get their gaming fix is through mods or fan-created indy games that are free. There are already several great mods/games released or in development and actually fan-created stuff is usually better than anything a studio could put out.

@brindy Do you know what you are talking about? Do you know why SGR was even released. Yes SGR was a game rushed out (also not FPS it was a TPS). Slightly offtopic for a second but why do people always call third person shooters first person shooters? It makes no sense both a different in many ways. It is like calling mass effect 2 call of duty black ops. Back ontopic Why do you say at least apb hit shelves? SGR was released as well. Yes SGR was bugged but the game was more fun then many mainstream games… Read more »

Well~ every Stargate-related thing is dying with SGU, this is truly sad…

What?!?! I didn’t know they release the game. This sucks! I would’ve bought it.

Stargate games have been cursed from day one, What a great shot to kill game if it was to came out. But the curse seems to be in place. “SUCK “

I bought this game but I always thought the model was going to struggle. Most 100% online models follow the WoW model where you pay for access to servers and this supports continued development and even turns existing customers into ongoing revenue streams.

I think there should be a stargate game that can be played in both MMO/Multiplayer and Single Player Quest mode.

Stargate worlds looked promising as a multiplayer game but we know what happened to that.

I’d be sadder if this whole affair hadn’t been an enormous mess and doomed from the start. MGM’s monkey-see-monkey-do business strategy — “World of Warcraft is a game that is hugely successful, so if we simply make our own MMO, we’ll be hugely successful too!” — was far, far too naive. I don’t blame the people on the ground in Cheyenne Mountain Entertainment who had to try in vain to make a WoW-killer with the time, money, and talent they were given, though. Hold on a second, let me see MGM’s “strategy” again. If I made a few changes… “Battlestar… Read more »

[…] The courts awarded CME back its assets, only for MGM to terminate its Stargate licence pretty much simultaneously (and also going bankrupt, but that’s a whole other story). Stargate Resistance shut down on January 15, 2011. […]