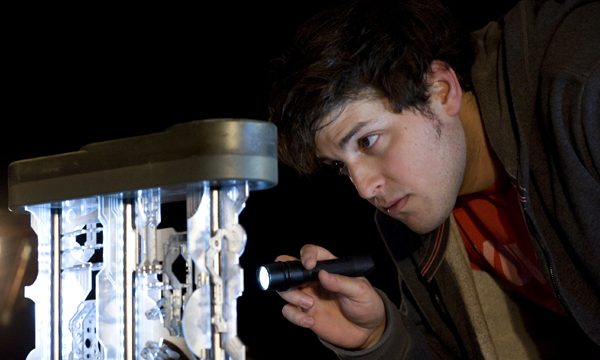 Eli Wallace was left with a broken stasis pod and a rapidly closing window of time in which to get it fixed.

Stargate Universe is back! Don’t miss the mid-season premiere and the start of the final 10 episodes tonight on Syfy Channel. It’s a new night and a new time — 10 p.m. Eastern and Pacific, following a new episode of Being Human.

“Deliverance” picks up where “Resurgence” left us off in November: Destiny is under attack by drone ships as part of the Ursini’s desperate bid to take out their control ship. Chloe has escaped her quarters, attacked a guard, and done something using the ship’s computer interface. Is it to hinder … or to help?

In tonight’s episode, old enemies return to make a bad situation worse as the crew fights for survival.

After the show head over to GateWorld Forum to talk about it with other Stargate fans! And keep your browser locked on GateWorld all week long, as we bring you our exclusive full coverage of the mid-season premiere. We’ll have an episode summary and transcript, Omnipedia updates, HD screencaps in the Gallery, detailed plot analysis, and more.

And in a week’s time, Darren and David weigh in on the episode on the GateWorld Podcast — and we want your reactions, too! After you watch the episode, just call and leave us a brief message on the Podcast Hotline: (951) 262-1647. (Long distance rates apply.) Or you can record a brief message on your computer and e-mail it to [email protected].

Here’s a preview of tonight’s episode:

The final 10 episodes pick up from December’s jarring cliffhanger, where the Destiny encountered two warring races and an ally thought dead returned. In the Season 2.5 premiere, ‘Deliverance,’ the Destiny is now locked in a battle with a Drone Command Ship and surprised by the arrival of the aliens that abducted Rush and Chloe.

Catch up with the latest episodes of the series now on iTunes or Amazon.com! (New episodes won’t be on Hulu until 30 days after Syfy’s broadcast, but you can watch the last several episodes from the fall right now.)

In Canada: “Deliverance” airs this Tuesday at 10 p.m. E/P on SPACE. As a bonus, INNERSPACE is sending off the show with weekly tributes starting this Tuesday (11 p.m E/P).

In Australia: “Deliverance” returns Thursday at 8:30 p.m. on SCI FI.

In the U.K.: SGU returns to Sky in May! The network has yet to announce an exact date, but we’ll report the date as soon as it is announced.

We have to wait longer in the UK? That bucking flows!!!

@Sparky:
One month is very reasonable if you compare to other countries. ;) I wish I’d be able to watch it on TV, too. :) Waiting for the DVDs, I guess.

@jper Aye, one month will pass before I know it. Not to mention I hope the DVDs will be released for Christmas, a nice present for myself :) Maybe I’ll let family borrow them :)

It’s already leaked online since last week…D: Syfy or MGM sure doesn’t know how to keep things from leaking online when it comes to Stargate…

[…] spoilers over at Gateworld, including teaser […]

@xbladedragonx
You are not aloud to encourage illegal downloading.

True enough about the delay. What genius network inflicted the multi-month, mid season hiatus on us? Remember when a season played beginning to end with at most a month off over Christmas holidays? And a season was 22-26 eps, not these truncated seasons of 13 or less? (though I give the nod to SG for hanging on to 20 eps a season).

Oh for the good old days ;)

May until Sky shows it? Does that mean I can not listen to anymore podcasts until then? Can we even watch online legally? Wonder how the podcast will go on sine half the team is in Scotland! Is this the end? ;-)

@Slayme A whole season from beginning to end? I do miss those days. The effect of a multi-month hiatus having a severe impact on ratings is well evident. Flash Forward, Caprica, SGU, The Event (it’ll happen) to name just a couple. They’ll continue to make television series this way because it’s the way it’s done, and they’re quite happy to continue. I’m not happy about it because when it does return, there is a very good chance due to lack of advertising, and me not watching 10 hours of TV a day, that I’ll miss it. (Only saw the last… Read more »

@Sparky I have a huge problem with that,as well.Not only for reasons you mentioned,but I forget what was going on before the hiatus,I forget that the show even exists.Geez,yeah we’re gonna give you first few eps and see ya’ next year!!In todays fast world bombarded with information..who cares about next year continuation,6 months hiatuses,or as in case with Caprica 8,or what was it 10 months!

What are the chances for SGU to be renewed, if these “last” 10 episodes are better, and more viewed than the previous 30 episodes?

@Jim I’ve forgotten how the, dare I use the phrase, mid-season finale of Caprica ended. The final episodes haven’t been shown here, at least I don’t think so. I might have missed them, and it seems a little pointless to watch the final episodes when they DO air as not only has it been cancelled, the series ends (apparently) with a lot of balls in the air, so to speak :(.

The same with the SGU season 2 mid-season break ending on a cliffhanger (and the series itself), I will be watching the final episodes though because it really is good and for some reason the stories have stuck in my mind. I can actually remember what was going on several MONTHS before, like a book you’ve stopped reading, you pick it up, start reading again and know exactly where you are in the story line. No “previously on SGU” is needed, which is why the little recap at the beginning of each episode irks me somewhat.

@Sparky Well Caprica actually managed to finish up the story.It was canceled just as it was becoming really good and dynamic,just as the action had started,but they,unlike SGU obviously either had a contingency plan in place,or simply reacted to indications that they were about to be canceled,so they closed it up quite well..as well as they could.So in the end you can see and then imagine events going towards the first human-cylon war and later on BSG.