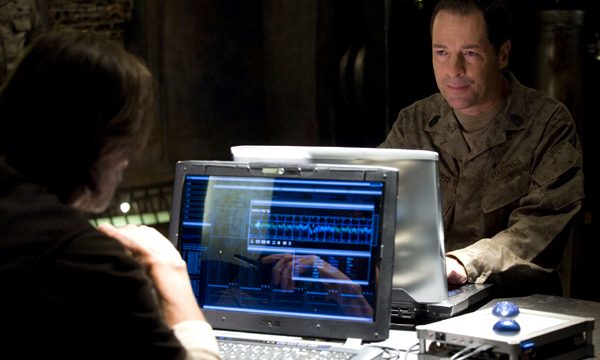 In tonight’s new episode of Stargate Universe, Sgt. Greer and Camille Wray are trapped during a visit to Earth when Homeworld Command comes under attack. Meanwhile, two V.I.P.s use the communication stones to visit Destiny. Don’t miss “Alliances” tonight at 10/9c on Syfy!

All week long we’ll bring you GateWorld’s complete coverage of the episode, including the summary and transcript, podcast discussion (call (951) 262-1647 and share your reactions to “Alliances”), Omnipedia updates, HD screencaps, and more. And head over to GateWorld Forum after the episode to discuss it with other Stargate fans!

Here’s your preview of the episode:

An attack on Homeworld Command traps Greer and Wray.

In Canada: “Alliances” airs this Tuesday at 10/9c on SPACE. Also don’t forget to stay tuned for INNERSPACE at 11 p.m. The behind-the-scenes show is sending off SGU with weekly tributes.

In the U.K.: SGU returns to Sky sometime in May.

In Germany: Season Two continues this Wednesday, 23 March on RTL 2!

Read more about “Alliances” in GateWorld’s Season Two episode guide, and stay tuned all this week for our full coverage of the episode.

Why is the lucian alliance attacking now,did they get just get a new leader or something, or did they have to train and gather up ships and equipment,and what would the cover story be for this attack,a meteor shower? a terrorist attack? I guess we would all find out…i hope…

Going to skip this one and all the other until that guest episode..

God the wait for the David hewlett and Robert picardo episode is killing me.

Last two episodes where absolutely amazing!
Cant wait for this one!

well, the description says that an alien ship crash lands into Homeworld Command so it might not necessarily be the Lucian Alliance attack we’ve been expecting. That being said, how are they STILL able to keep this stuff secret from the public? Its really starting to stretch believability.

Maybe in the stargate universe, on their earth, they put shows on television that make the premise so uninteresting that people are willing to look the other way?

From the description I am wondering what Alliance there is in the episode. I hope it not just a alliance between Geer and Wray, it would have been great if French Stewart kept the same character and perhaps have a little nod to him being one of the first to go through the gate. I am also wondering how they will cover it up, personally I hope this is the episode that will slowly reveal the entire programme to the public. Spoiler The ship looks like at Go’uld ship but the weapon we see Wray trying to disarm does not… Read more »

what ship are you talking about?

Another lucian Alliance detour. There are only so many episodes left wish they wouldn’t waste them on plots left over from SG-1. It is nice to see French come back to stargate. Yet another way SGU is more true to the original movie.

I wonder what the ending of stargate universe would have been, if they did all the seasons i mean,and when mckay goes guest starring,that would be cool,Also,if i was on destiny,i’d try to track where all the seedships are, there must be GPS tracker thing on there that tells you where they are…to find nearest seed ship…O.o

“In Germany: Season Two starts this Wednesday, 23 March on RTL 2!”

I agree with the comments about the secrecy of the Stargate program. In the Stargate universe, the US government would not wish to spend billions on old fashioned Space Shuttles, they would retire them and wait for a vague promise of a privately built replacement!

Personally, I love Stargate, all of it, and I’m sad to think it will soon be all over (probably). I was sad about Caprica but at least that universe has another show in the making.

What the heck? Is that the “other” Telford?
…Cool, whatever. I was beginning to like him anyway.

I just finished watching the episode, and it was pretty good. I liked how they finally talked about the SGC and stuff. But a naquadria bomb? Naquadria is only available from one planet and thats the former sg-1 member Jonas Quinn’s. Naquadria is also very unstable so its unpredictable to predict the blast radius of the bomb. I just think they should have just stuck with naquada instead of naquadria. Good episode though and cant wait for the next. Hope the ratings went up for this episdoe too

Good episode, although the ending kind of sucked. Why i think this.. cause it just ended with talking and no follow up on the main plot of the episode. Did they deactivate the bomb or not?

@hkgenesis – This is meant to keep you on the edge of your seat until next week where they kill off Eli’s girlfriend for a second time. But it’s definitely not forced drama! Nope!

Honestly, while I thought the last two episodes were decent I was really bored with this one. It reminded me of the slow pace of season 1 and can we please get rid of the freaking stones.

Almost every “stones episode” makes my skin crawl. In my opinion the single biggest mistake plot wise SGU made was making use of the damn stones to drive episodes.

We only have 7 episodes left, can we please spend them on Destiny instead of focusing on earth with “stones episodes?”

@hkgenesis They deactivated the bomb,I think that’s pretty much self-explanatory,they don’t need to show and directly point out to everything..it’s just like in “Time”.They just haven’t been able to get to the stones through the rubles to get back with the intel.Although,I honestly hope the stones have been destroyed,or disabled permanently,once and for all!:)

I disagree, this episode brought up more questions about the stones mystery and it looks like next week may be another stones episode. I hope so! As soon as it was exposed in this episode that the stones were hacked, I think Rush or Eli’s response should of been, “You hacked the stones!!??” Stuff that just shouldn’t be messed with. I wouldn’t have thought Stewart’s character would have had the knowledge to change the stone’s coding. Every week, I’m beginning to think Stargate Universe is turning out to be more hardcore Stargate than any of the other series. The story… Read more »

Out of all the stargate badguys, the lucian aliance is by far the worst. Every other would make this show more interesting. But still the show is getting better and better.

I know MGM has reused actors in the past for the other shows when they thought no one would remember the actors were in previous episodes but was the LA pilot the same actor that piloted the daytaoulous (I cant spell that for the lift of me) in SGA?

@puddlejumper_1 Really!? I’ll have to rewatch that.I remember seeing her just picking up the pin to remove the housing beneath the holo-protection.I don’t remember seeing her even reaching inside.But I seriously doubt that a naquadria bomb went off in DC.