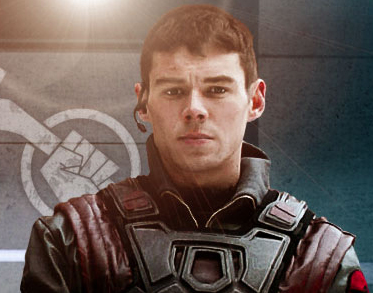 Based on the popular video game franchise and co-starring Stargate Atlantis guest star Robert Patrick (“Marshall Sumner”), Red Faction looks to be a step above Syfy’s usual Saturday night B-movies. “It’s definitely quality and it has really, really smart minds behind it,” Smith told Show Patrol. “This is not going to be another [movie of the week].”

Smith plays Jake Mason, son of aging Mars freedom fighter Alec Mason (Patrick) in the 22nd century.  When Mars comes under attack, the soldier must fight off the alien threat while attempting to reunite his separated family.

The actor said that initially he wasn’t interested in doing a movie of the week for Syfy, but was drawn in part by how different this character is to Lt. Scott.  “It was great to play someone who is a bad-ass and knows it,” he said. “I love Scott, but my God that kid has the weight of the world on his shoulders. There is so much self-doubt and angst and just inner turmoil about him — and guilt, Catholic guilt, I guess — about everything. He takes responsibility for everything.  It was nice to play someone who just could not give a sh*t about what anybody thinks about him. He’s a lot more reckless.”

<3 Danielle Nicolet, but I'll pass since Syfy is involved.

video doesnt work? not even on syfy’s site?

looks better than i imagined.

haha is that the same grif from comic book movie?

Every episode of SGU is better than this.

From SGU to a Syfy Channel produced “movie”?

I’m kind of torn on this. While I liked the Red Faction game and am interested to see what the “movie” will be like, the other side of me says “hell no” because it’s a SyFy production and I want SyFy to just go away.

i bet this will be watched by more people. i think this is a step up for Brian, what are you guys mad about? its not his fault that it got cancelled. at least more people will notice him in that movie.

Too bad it is on Syfy, I won’t be watching the Traitor channel anytime soon.

That’s the thing though. It’s not a proper “movie”. It’s a “movie” produced by Syfy Channel, which means it probably had a budget equal to the average worker’s salary. It’s a TV movie, and they are always career killers (except for the Doctor Who TV movie, shut up, lol!).

BJS deserves to hit the big screen in an actual movie with actual credit behind it. Robert Patrick just made a bad career move by agreeing to be in this.

It does not look all that to be honest..
The few CGI moments didnt look good at all.. typical naked woman on the trailer… I thought they would have realised we are well I am getting tired of sex scenes. Only B Movies and bad Horrors required nudity/sex to sell at all.. looks far too dodgy to me.

I will watch it, give it 20 minutes and I can see my self switching over.

Crap I cant see from Europe so trash it

at least ones made in the USA and are not animated.
Let me know when they get a the epic super mario bros 2 movie made and put on this TV and make sure they have jump jet boots again and not look like anything super mario like the first 1993 movie.

Just think we get this and they wont buy a made for TV stargate sg1 movie.

No no wait I want the wizard 2 I take that back and they enter an even more epic nintendo tournament and the kids are now like in there 30’s and at the end of the movie you see a new super mario game for the new nintendo system coming in 2012.

“Best selling videogame saga”? Huh? What? Who are they kidding?

… at least quite a bunch of our favourite “scifi actors” – not sure when/if I’ll be watching (and yes, I too am in the Pegasus galaxy so not able to watch for that reason either)

Sorry ,i wont be watching this or anything on syfy anymore. Boy how fast folks forget what syfy has done to stargate. I knew after a couple weeks the anger over stargate cancellation would fade…… and so did syfy execs.

why would they be competing with the stanley cup finals??

wrestling paid for this hah since nobody watches anything else on the channel anymore.

I tried to get into this series and bought the PS3 game. I turned it off when I noticed the sky was blue…