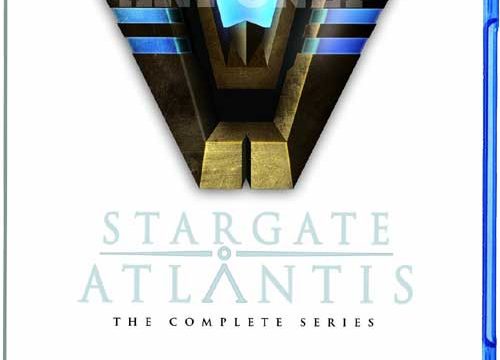 In a reversal of their previous decision to avoid the high-definition format, MGM and Fox Home Entertainment will release Stargate Atlantis: The Complete Series on Blu-ray this summer.

The studios haven’t made an official announcement yet, but TVShowsOnDVD.com did some digging and found pre-release info and preliminary box art.  The studio later confirmed the release to the site. The cover design matches the DVD release of The Complete Series, but is marked as temporary art and so subject to change.

The full series will be released on July 26 in North America, featuring all 100 episodes of the show on 20 discs.

There is no word yet on the bonus content in this release, but based on the studio’s track record it will include all the same content as the DVD release.

The set comes at a suggested retail price of $199.99.  You can pre-order it now at Amazon.com

The studios released Stargate Atlantis Fans’ Choice two years ago, which included just three episodes — extended versions of the 2-part series premiere, “Rising,” and of the series finale, “Enemy At the Gate.”

There’s no word yet on when (or whether) this release will show up in the U.K. and other regions.

The news comes at the same time as MGM and Fox announced last week that they have renewed their DVD and Blu-ray distribution deal through 2016.

And what about Stargate SG-1? While there is nothing new to report on that front, MGM told GateWorld in 2009 that they were evaluating options for releasing the series on Blu-ray. In that case, older episodes would have to be remastered for the high definition format.

(Thanks to Billz, Tanith, Rob Korporaal, Lyle, Rick, Robert, Alex, Dave and Krzysztof for the tip!)

I didn’t know they were considering remastering SG-1. In that case, I certainly hope SGA sells well enough to encourage it. I’ll certainly buy it – that is, unless they do something stupid like region locking it to the US and then neglecting to release it anywhere else in the world so that they effectively shut off most of their consumer base. Like they did with the AoT and Fans Choice Blu-Ray’s, sigh…

I just ordered it – thanks for the head’s up.
Now all I have to do is get a Blu-Ray player!

finally! thats all we have now so ill cherish it!

This is awesome!!! I will be buying this!!! And if they choose to do this with SG-1 I will buy that also!!!

Fantastic news! I never bought any of the SGA DVDs because I was waiting for the series to come out on Blu-ray. I just put in my pre-order.

Woo! Time to contact MGM’s marketing department to see if they’ll let me design this one! Then I can have my design on two Blurays!

I’m hesitant to make the upgrade to the blu-ray set, if we get this in England so that I don’t have to import it. On the one hand, yeah, having Atlantis and hopefully SG-1 on blu-ray would be brilliant. On the other hand, since I’ve had my complete SG-1 set and Atlantis season sets, they have amassed signatures from various cast members, and I don’t want to sell them to make way for the blu-ray sets.

i spoke to mgm, and they said if we all order a dozen, theyll green light 2 movies and a 3rd season…

This on Blu Ray, Great!
Bring it to the UK I’ll buy it!

Yes, bring it to the UK
i’ll buy it as well.

remember if you buy it they will come……

I cannot stress this enough: If you want the franchise to continue sooner rather than later, buy this release! Now to just scrounge up $130…

I hope the bluray released soon in Germany. We are looking forward to save the Stargate franchise :)

Luckily my PAL PS3 is a region free player. So, ordered this box set straight away from the Netherlands.^^ Great news.

I will not buy anything SG related until they produce the real ending to SGU story.

That’s exactly that attitude that WON’T give us that ending we desperately want!!

Put me down for a dozen if we get them in the UK.

I think it may be a good investment in the long run. However, the SGA series were filmed and produced in a better quality than most of the SG1 series. I say this because a lot of SG1 DVD are wearing out and there is a lot of tech glitches in the mastering… on the other hand, my SGA DVDs are just fine.
So in theory – I can imagine that TPTB & marketing are “testing” to see if these versions are going to be truly profitable in the long run…then hopefully they will work on the SG1 series.

exactly what i was waiting… just ordered it.. Order it.. This is the perfect test for MGM to see if they should make SG1 SGA SGU movies…

As soon as SG1 is released on BluRay, it’s mine. I will invest in a BluRay player for my PC, so that the “region” issue won’t be a problem.

I’m not an SGA fan myself (never seen but a few episodes), but hopefully this product will do really well and encourage MGM to give at least SGU the ending it deserves.

nobycane: For this reason, I’d much rather see some SG-1 releases first (atleast from the latter seasons), after they see the disappointing sales of this, they’ll never do SG-1 :-/

Looks like Amazon.com is the only way to get it in Canada for the moment as well. I have Seasons 1-5 on dvd, but the artwork left a lot to be desired. And I have the Fan’s Choice Blu-ray.

I will have to scrounge up some US $$$$ to buy the Blu-Ray set, expecially if the artwork is as good as the dvds you can buy now. :-)

I guess I can say good-bye to buying Star Wars on Blu-ray for now.

@ Yxelione: I would too… though I wonder what the marketing strategics might be for these? Test out the profit margins for the SGA blu-rays, if profit is good enough then tackle the SG1’s? It is curious – though it might be a quality transfer issue too. More work may need to go into upgrading all the S.1-7 stuff to Hi-Def…just a thought.

@ klharris39: I agree – I am almost sick and tired of all the Star Wars re-re-re-releases! ;-) If I decide on the SW blu-ray – I might wait a year or two and see if the $$ comes down. Right now, with the economy and gas prices the way they are…I am not dishing out any extra money for high costs blu-ray packs/collections.

I pretty much stopped buying dvd’s when I heard bluray was coming out. So luckily I never bothered to buy sg1 or atlantis. Once there’s a good sale on atlantis i’ll pick it up. I did a rewatch of atlantis last year and I really enjoyed it alot more the 2nd time around.

It’d be nice if they remastered sg1. It’d be expensive redoing all the fx though? The only other option would be what they did with firefly. They left all the FX shots in SD, and all the the interior cast shots and what not in HD.

Just ordered my copy, including shipping to the UK it cost me $130, so all you brit SG fans with a blu ray drive in your PC (region free) this is your chance to support the franchise, who knows where it will lead.

Just watched all 5 seasons for the 2nd time a few months back and thoroughly enjoyed it, wish I had waited for this but its going to be cool on my 3rd time with the blu ray version and hopefully loads of extras too.

Thanks MGM for finally delivering some goods news

since we’re at the end of the stargate, this site should have a ultimate stargate fan contest…

It would be great if it’s Region Free; or if they bring it out in other regions at the same time.

I hadn’t seen this before but now when I saw it, I cancelled the order for the DVD box. I really hope it becomes available for region two quickly.