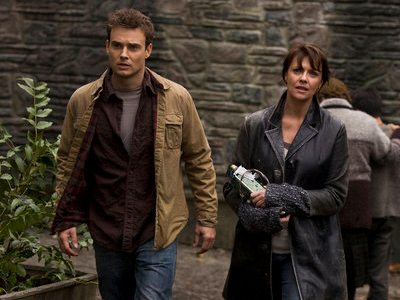 A week’s vacation for Memorial Day weekend did Syfy’s Sanctuary a world of good. The show returned with a new episode this week, turning in its best live viewership numbers since the show was moved to Mondays.

That’s a massive 39 percent recovery over the May 23 episode, which was Sanctuary‘s lowest ever.

Two more episodes of Sanctuary‘s third season remain, with the season finale airing on Monday, June 20! Head over to our sister site, SciFi Stream, to learn more about these episodes. 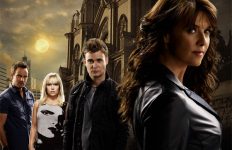 (but still return to the ‘safer’ friday timeslot :p)

wait, so Sanctuary Season 4 will on;y be 13 episodes?

@Wraithkelso – yes Sanctuary season 4 will only 13 episodes like season 1 and season 2 were.

Consider the terrible quality of episodes in this extended season of 20 episodes, maybe a tighter schedule is the better option. If Sanctuary can give viewers less of the crap that came after The Hangover and before Normandy that’s a good thing.

Was it up against any major network shows or are we firmly in summer season?

How is 656,000 a sustainable rating for this show but if SGU gets 1,000,000 viewers its unsustainable levels? Yeah that makes sense SYFY! There network is complete garbage the shows there coming up with Alphas might as well be called Heroes meets Wanted because from the 20 second preview those are the two things they ripped off! Imagine Greater? Why don’t you come up with something original what happened to shows like Farscape? Im glad I haven’t tuned into that garbage channel since the SGU finale the last great thing to air on there! Can’t wait till there POS network… Read more »

House M.D. ended its current run the previous week. Not sure about anything else, cuz I don’t really watch anything else. I imagine a lot of viewers from that spilled over onto other networks. I’m glad Sanctuary got a well deserved ratings boost, but less glad SyFy-Lis got more network viewers.

@Starscapesg1 This is how (in the words of Brian J Smith): “The economics fell through and the ratings sucked big time. You can point fingers and you can blame whoever you want, but the ratings were not there. Stargate Universe was one of the most expensive TV series to shoot on television, period. There are shows out there that get 20 million viewers a night that shoot for a fraction of what it cost for us to make a single episode of our show. It makes no sense to be spending that kind of money on a show.” See the… Read more »

Unlike the last time the ratings went up, this is more than a tiny uptick, this is an considerable increase. I was hoping for any increase at all, anything, because I didn’t want to see them get worse, I did not, they got considerably better. :)

Make no mistake, I WANT it back on Fri more than anything, and nothing will change my mind. :p

You’re right. 656,000 isn’t sustainable. But you have to remember that “Sanctuary” was renewed for another season back in the winter, before the second half of the season was aired (and also before the show moved from Fridays to Mondays, which caused the ratings to fall by half). When “Sanctuary” got renewed it was pulling in about 50% more viewers than when “SGU” got canceled. Given those numbers, it’s not unreasonable to think that “Sanctuary” had a better chance for renewal.

At this point isn’t Sanctuary getting what are essentially Caprica ratings?

I would imagine Sanctuary is cheaper to make but i doubt it is that much cheaper.

@Starscapesg1: Sanctuary is a much cheaper show. SGU costed 2 mil. per episode, but I’m sure that you knew that already. Right? You didn’t just spend your summer day sitting in front of your computer sulking over a cancelled show did you?

The space channel did the renewing of Sanctuary.

This all down to the fact that summer season as arrive, and probably just in the nick of time.

The real test for Sanctuary will be next season where it will air its entire run during the fall and spring, and unless it change night it will not survive that.

We are firmly in the Summer Season as everyone has stated, there is no competition..I expect if the group it with WH13 and Eureka they may get even higher numbers..while I do not favor Sanctuary I am glad that those that do, will be able to enjoy their show…I rarely even turn the TV on now days except for Supernatural Saturdays on BBC…

Let’s do a puppet theatre in front of a green screen.That way shows would be cheap enough for everyone to be happy..not.Unless one is a fan of reality tv.
To do a quality SF show nowdays below 2 mil per ep is just ridiculous.
Sanctuary has been able do it and kudos for that,but Sanctuary is no Stargate.
It’s a completely different type of a show,but look at the budgets of any respectable SF show in the past decade,not to mention the ones that are coming,like Falling Skies,or Terranova with $4mil per episode.

@Jim Do not forget this is SYFY not TNT. It all depends on the network, and what is the budget. Plus it’s not just about the budget it about pulling in an audience. That was something SGU just could not do. Just because let’s say you were given 10 Mil an ep, and you could do anything Effects and hire the top notch actors if your story just is not interesting then it’s all over with. I knew SGU was in trouble when I looked at the budget and the rating. Networks are forgiving to a point as long as… Read more »

This is the problem with all sci-fi shows these days and why they keep on getting canceled. Networks need HUGE numbers on them or its not worth it when they can have cheaper shows that more mainstream audiences work. If you read comments from George Lucas, they have 50 hours of the live-action Star Wars TV series ready but the problem is that they’re so expensive that no network would pick them up (even though it IS Star Wars and would obviously be the highest rated Sci-fi show in history). So what they’re doing is working on a way to… Read more »

@Atlantislove What you say is true,but you forget that it wasn’t the producers,but the network itself that wanted the “new and improved”,meaning more expansive and hopefully drawing in more new audience show.With the new,bigger budget.Producers could have told their new and somewhat different story with a much more limited budget,no problem at all!

@Browncoat1984 It’s not the spec effects that are so axpensive nowdays,in fact that’s cheaper than ever.There are other things that raise up the cost.But you’re right in what you say about the inevitable renaissance of space based sf tv.I agree.And when it does,what I personally want is not new Star Trek,Stargate,or Star Wars.I really want something completely new.

@Jim I never said they pick up fallling skies instead of SGU. I say if they can pick up falling skies then why did they not pick up SGU too? I don’t care if the network said I want you to stand on your head the producers were still the ones to cancel SGA, and I wouldn’t have done it. They wanted you to create something new you could have done that and kept the old show telling them that you just wanted to make sure that the new one takes off before you get rid of it. Networks will… Read more »