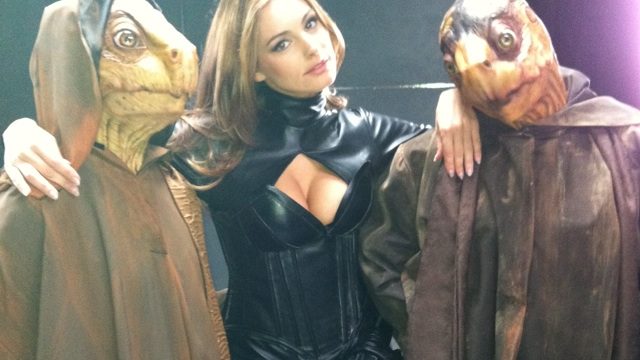 Actor Joe Flanigan (Stargate Atlantis‘s John Sheppard) isn’t straying too far from science fiction with his new project: an appearance on the new anthology series Metal Hurlant Chronicles, based on the French comic Metal Hurlant (published in the U.S. as Heavy Metal).

The half-hour series is currently filming in Brussels, Belgium, and also stars martial artists Scott Adkins, Michael Jai White, and Darren Shahlavi — plus Rutger Hauer and James Marsters.  Each episode will adapt one of the short stories from the comics.

Flanigan will co-star with Kelly Brook (who had a recurring role on Smallville) in the show’s sixth episode, titled “Master of Destiny.” Brook tweeted the photo above from the set (click to enlarge) — with her and a pair of “Turtle Sapiens.”  The two actors will reportedly play the characters Hondo and Skarr, respectively.  (Hondo is described as a “space hunter” who learns a secret from his dying friend.)

Sony Pictures Television has distribution rights in several European territories, but there’s no word yet on when and where it might air in the United States, U.K., or elsewhere.  The first season of 12, 30-minute episodes will be delivered in April, and the second season of 12 episodes in November 2012.

Flanigan also recently filmed a project titled The Butcher (a.k.a. 6 Bullets) in Bucharest, alongside Jean-Claude Van Damme. Stargate‘s Anna Louise Plowman (Osiris) is also a part of the cast, according to IMDb.  Head over to GateWorld Forum to find some set photos.

Check out a trailer with footage from Metal Hurlant‘s first episode (without Flanigan) below. We’ll post more on Joe’s appearance as info becomes available! You can also follow Metal Hurlant Chronicles on Twitter.

I’m italian, and I have read the novels of Valerio Evangelisti “Metal Hurlant”. Is this series based on that?

As trailers go… that one was terrible. About the show, i am nonplussed.

Joe Flanigan NEEDS to be back on Atlantis with his crew! Save SG-1, Save SGA, Save SGU and above all, SAVE FUTURE STARGATE TRAVEL!
End of story!

I’m sorry but this looks lame. I want space ships, aliens and interstellar travel… When are they going to make another show about SPACE???? I am sure there are a lot of fans of the Heavy Metal series, and I do not mean to insult anyone who is a fan, but this teaser looks so CORNY!!!! When are they going to make another SPACE EPIC?!? Waste all their money on these failed series when the best series ever made is SG1!!!! BRING BACK SGA, BRING BACK SGU and MOST OF ALL… BRING BACK SG1, with ALL ORIGINAL CAST MEMBERS, JACK… Read more »

@acey916 each of the episodes is based on one story from the comic series. So Joe gets one ep, James Marsters gets one ep, Rutger Hauer gets one ep, and so on. Some of it is very space based from what I can tell – I’ve seen the story that Masters of Destiny (Joe’s episode) is based on and it has a space battle, aliens, adventure etc. Also this is a French company making this one, has nothing to do with Canadian or US television or financing. I would love if SG came back (particularly SGA) but it’s not going… Read more »

@Sylvia I respect that. Like I said I am not too familiar with this series or the comics. The French made anime (Valerian and Lauraline) was great. So I have to give the French some credit. I know this has nothing to do with this series, but that is the only other French made show i know of.

I have to agree on supporting the SG actors to the fullest. I too will probably watch this just for the SG actors like I do everything else they are in. I would like to see some Space based SciFi again!!!