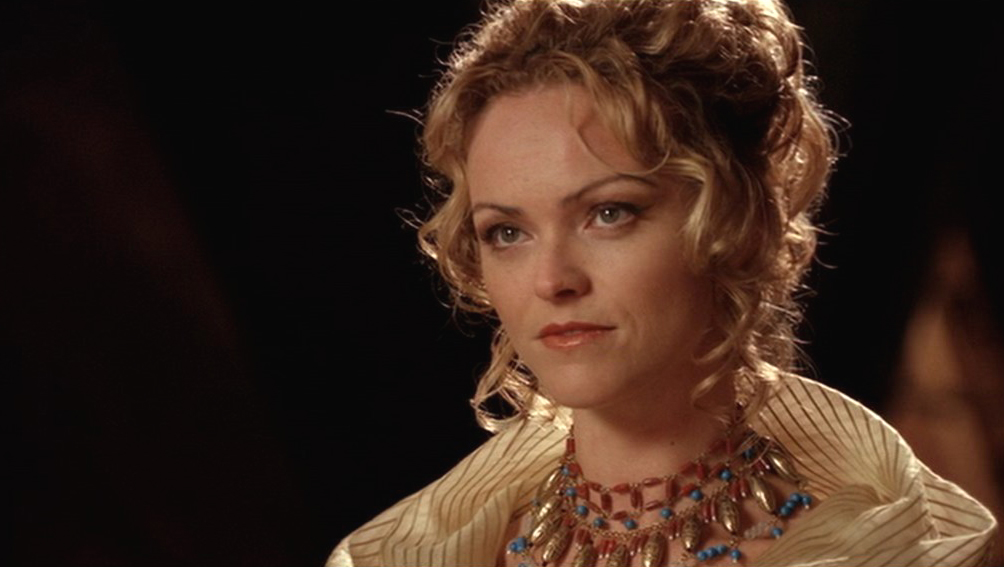 Banished to Earth for thousands of years, the Goa'uld Osiris was released by a young archaeologist named Sarah Gardner -- who became his new host. He went on to serve the powerful Goa'uld Anubis, a former acquaintance of Osiris', who was poised to conquer the galaxy. Osiris' host is also Daniel Jackson's friend and former girlfriend.

In Egyptian mythology, Osiris was the first Pharaoh of Egypt. His mate and goddess was Isis. Osiris' brother and enemy was Setesh (Seth), who sealed him in a "magic box" (a Goa'uld stasis jar) and, according to the myth, cast him into the Nile River. The Osiris jar was discovered in the twentieth century by the Stewart Expedition.

The ship carrying Osiris away from Egypt sank, and its contents were not salvaged for some 70 years. Finally arriving in Chicago, the Osiris Jar was opened by Gardner -- eager to make an important archaeological discovery that would distinguish her young career. Osiris took her as his new host, and fled Earth in a hidden Goa'uld ship -- promising to return one day with a vengeance.

Osiris' mate, Isis, is dead. The Goa'uld symbiote found in the Isis Jar did not survive because the jar's seal had been damaged during transport. Osiris' brother Seth was killed by Samantha Carter in 1999. Despite their relation, Seth and Osiris were mortal enemies.

Osiris makes her final stand before being captured on Earth. From "Chimera"

Once free, Osiris managed to build a relatively strong following in a short period of time, claiming to have taken advantage of favorable conditions within the Goa'uld empire. She was made aware that her old associate, Anubis (believed to be dead), had returned from a thousand year absence. Joining his ranks, Osiris was immediately appointed as his envoy, attending a System Lord summit in the Hasara system.

Anubis rejoined and then overpowered the System Lord collective, and Osiris remained alongside the new power. Probably at his request, Osiris traveled to Earth to interrogate Dr. Jackson in his subconscious mind, preying on her host's love for and memories of Daniel in the hopes that he would unlock the secret behind an Ancient map that would lead Anubis to the Lost City of the advanced species. When she discovered that Daniel did not know how to read the map, she moved to kill him -- but was overtaken and captured by the rest of SG-1.

Osiris was extracted from Sarah Gardner's body by the Tok'ra. It is not known whether or not it survived.

The Curse - When Sarah Gardner frees him from imprisonment, Osiris takes her as his new host. After failing to learn the location of the Stargate or the fate of his mate, Isis, Osiris flees Earth in a hidden ship -- pledging to return for vengeance.
Summit - Osiris accepts Zipacna's offer to ally with the powerful Goa'uld Anubis, and represents him at the System Lords' summit -- where she finds Daniel Jackson on an undercover mission to destroy them.
Last Stand - Osiris is welcomed as Anubis's spokesperson at the System Lords' summit, and attacks Yu and Dr. Jackson after Daniel tries to kidnap her.
Revelations - After defeating Thor's battleship and capturing him, Osiris attacks a secret Asgard laboratory in hopes of obtaining their advanced technology.
Chimera - Osiris is sent by Anubis to interrogate Daniel Jackson regarding an Ancient map leading to a "place of great power," and is tranquilized before making her escape. The Goa'uld is removed from Sarah Gardner's body for good.