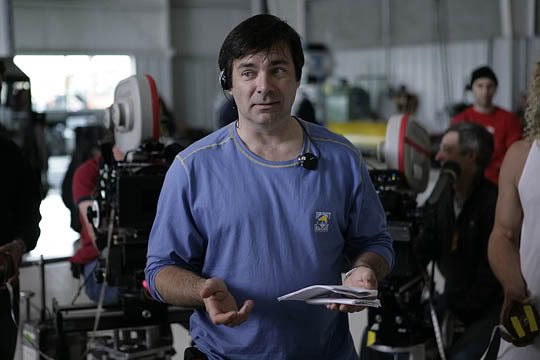 He’s been a constant creative force as a director in the Stargate franchise for many years — along with being one of current series Sanctuary‘s executive producers.  But now, Martin Wood is set to tackle a whole “New World“.

Wood is joining fellow Sanctuary producer Gillian Horvath and original series co-creator Tim Haines — along with several others — as executive producers for the new series Primeval: New World, a North American-based spinoff of the British series.

The original series, which began airing on British network ITV in 2007, centers around a team of scientists tasked with investigating the appearance of temporal anomalies across Britain, and containing the threat of the prehistoric and futuristic creatures that would enter those anomalies into our present day.  While never the ratings powerhouse that a British genre mainstay like Doctor Who commands, the series has maintained a loyal following over the years, and just aired its fifth series (season) this past summer.  The spin-off, which is being co-produced by Canadian studio Omni Film Productions and original series studio Impossible Pictures, is being described as a “parallel, yet independent series” with “story and character development [that] will move between the two series, uniting certain plotlines.”

Casting for the series has not yet been announced, but considering that a Stargate alum is already on-board behind the camera, and that the series will be filmed and produced in Vancouver — it’s entirely possible that the production could include some of the faces we’ve grown to enjoy over the years from the various Stargate series.

We’ll keep you posted with relevant updates as they pop up.  The series is expected to begin production tomorrow, and will air on Canadian channel Space at a later date.  As of now, the series has not been announced for broadcast by any American televsion channels.  And Wood, along with fellow executive producers Damian Kindler and Amanda Tapping, still are awaiting word from Syfy on the possibility of a Season Five episode order for Sanctuary.

This could be interesting – I’ve liked the British series and wouldn’t mind seeing more. Hope it gets picked up, if it can manage some good special effects.

I’ve really enjoyed Primeval. I finally watched the fifth season over the weekend. It was cut down to just six episodes. I’m really looking forward to this one. I think they’re going to take a bit of an edgier (/darker) approach on the Canadian version. I also can’t wait to see which SG actors will be cast. Cheers!

I think it a certainty that there will be a lot of talent showing up on the show that have appeared in Stargate. There must be very few actors in Vancouver or even Canada that have not appeared in a Stargate episode.

Please give us some Hewlett, Ben and Joe.