As a director and producer on Stargate SG-1 and Stargate Atlantis, Martin Wood helped to make the franchise what it is. He directed more than 70 episodes of the franchise, as well as SG-1’s final outing — the 2008 film Stargate: Continuum.

Today his work can be seen in the Hallmark drama When Calls the Heart, where Martin is a director and supervising producer. He’s also been directing on the new Netflix drama Virgin River.

We caught up with Martin at Gatecon: The Invasion in Vancouver. In our conversation he talks about Stargate’s place in his life as a director, as well as getting to learn new things and play with new, emerging technologies on the set. He also talks about his work on Sanctuary (which he directed and executive produced for four seasons, alongside Stargate’s Damian Kindler and Amanda Tapping), and what he thinks Stargate needs in order to make a comeback.

GateWorld’s interview with Martin Wood runs 10 minutes, and is available to watch in full below! You can also listen to an audio-only version by clicking on the player above or subscribing to the GateWorld Interviews podcast.

GateWorld: Martin Wood, it’s exciting to be back with you after so many years away from Stargate! To come back here at Gatecon, and be able to talk Stargate again and see old friends and old faces …

Let’s just start by getting the big picture of when you look back on 10+ years of Stargate — 12, 14 years the series was in production. How did Stargate change you, as a director and as a person?

Martin Wood: Well Stargate made me as a director. I was given a chance to do everything in Stargate. And most directors don’t get that kind of time span to experiment in a show that evolves like that. A lot of times when you have a series, it can’t evolve in the mega leaps and bounds that Stargate did, because we were evolving a technology while we were doing it. We were moving forward at such a massive rate with the way that digital technology was working, the way that special effects and visual effects were advancing. 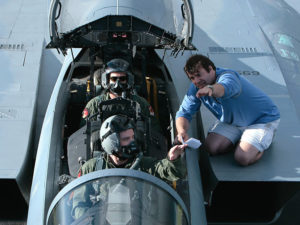 Martin Wood gets to play with an F-15 fighter, alongside Stargate: Continuum co-star Ben Browder.

A lot of what you are seeing today, we were on the cutting edge of that at Stargate. Because we were on the air for so long and we were able to [say], “Hey, this is a new lens that is being used.” “Hey, this is a new lighting technique that’s used.” And for me, as a director, I was able to evolve with that and I learned how to do everything I know how to do on Stargate.

GW: I think you made the shift in Season One from assistant director to starting to direct your own stuff with episodes like “Solitudes.” Is there an episode that stands out in all that canon of time that is near and dear to your heart — not necessarily because you think it is the best thing you did, but because it is dear to you?

MW: Well “Solitudes” was particularly very memorable because it was the first one I got to do. “A Matter of Time” was one that was a real brain twist for me. And that was one of the ones that was the hardest for me to think of, to conceptualize with Brad [Wright] about how we were going to do some of that stuff for “A Matter of Time.” I really enjoyed “A Matter of Time.”

I really enjoyed “Solitudes” — no, not “Solitudes” … the one with the Russian submarine … 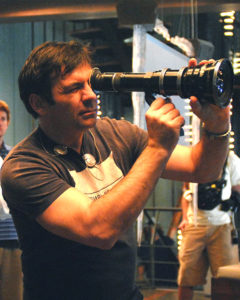 Martin Wood on the set of Stargate Atlantis

MW: No, “Watergate” was fun. But it was the one that preceded that, where the Replicator shows up in the submarine.

MW: “Small Victories” is one of my favorites. I’m not sure why. I just had so much fun doing “Small Victories.” Of course “Rising.” “The Eye” and “The Storm.” “Lost City.” I mean, these are all the epic, big ones were the ones that I thought were so much fun, because they were epic and big.

I look over some of the ones I did that were very contained and I think, “Man, there wasn’t any show that I didn’t like doing.” You’d think that “Politics” would be — that was the first year too — but you think, “It is a clip show. So why would it be so much fun?” Well it was fun because I had to keep thinking of different ways to get into these things, into these clips and stuff like that. Everything was fun, everything was interesting to me.

But yeah, those big ones were always the most fun for me.

GW: You guys developed over the course of those years, you developed a vocabulary — obviously a visual vocabulary for the shows, for SG-1 and for Atlantis. And there’s both it seems consistency between the different Stargate series. And are there differences as well when you were approaching an episode?

MW: Yeah, when I made the set for Atlantis — when we started designing the set for Atlantis, there had to be things that were familiar to us, that we brought with us. But then we also wanted to find things that were unfamiliar, because it was a totally alien sort of place for us. And I think that just because of that, the tendency was to always try and make it look more like SG-1. And we kept pulling it away, saying, “No no, the consoles are too much like the consoles we have back home. Let’s not make those things happen.” Even things like the Puddle Jumper and stuff like that, we wanted everything to look and feel like it was found articles, rather than things that we’d built. 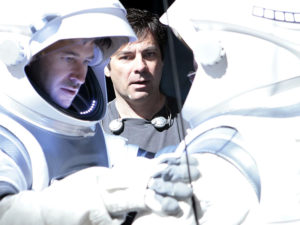 And then as we started to hybrid things, even then it was still, “No, the materials that are available to us were not the materials that are available on Earth. So let’s not do that. Let’s not make them the same.” And that was an intention, was … when you saw it on screen, you instantly knew which one you were watching. Even our color palette was different in Atlantis than it was in Stargate.

And it’s funny because the art director was the same art director that we moved from one to the other. But Bridget [McGuire, production designer] was very much on board with, “Let’s make it look different, so that you knew when you watched it on television, ‘Oh, that’s Atlantis.'” Because we were doing these crossovers with the characters, too. And that’s why when we did “Lost City,” it was so interesting, because we were starting to find that mix in “Lost City.” And we were trying to find implements and things that were [different]. Like even the chairs that we used had to be something different.

GW: Is there a shot that sticks out when you think about going into the day, you maybe weren’t sure if it was going to work?

MW: … Just about everything that exploded I wasn’t sure would work!

Trying to find Teal’c’s good side was always a problem. [Laughter] And so if it was a heavy Teal’c show it was, “Oh, I’m going to have trouble with this …”

There were things like “The Eye” and “The Storm,” where there were so much physical effect that we had. We were dumping 500 gallons of water every couple of minutes … 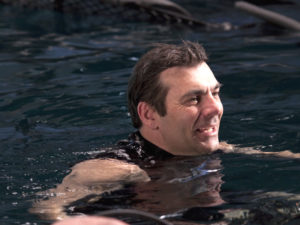 MW: Yeah. And my whole things was, “Can Robert Davi hold up to this? Can Torri [Higginson] and can David [Hewlett] hold up to this?” And so, for me, I put myself in the set. I directed from the set. So when it was raining, when it was pouring, when everything was happening, I stood there with them. Because then it was harder for them to complain about somebody standing down on monitors watching. I stood there and watched, being dumped on the same. And I insisted on that happening.

Those things were always hard, because you are no longer in the element of a director at that point. You know when we did “Next Tuesday” for Sanctuary, it was that whole thing about — “OK, we are going to be five days, Robin [Dunne] and Amanda are five days in the water.” I put a wet suit on and I was there with them the entire time.

So those things were always, “I hope this works.” You may hear me in the back of some of these things when they do “behind the scenes,” one of my favorite phrases is, “I sure hope this works!” But a lot of times it’s very honest … I do hope it’s working!

GW: Well to cut to the chase, in the interest of time: What makes Stargate special and what do you think it needs to come back? 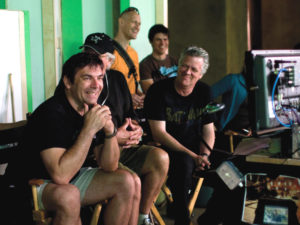 MW: What’s special about it is the four characters that we started with. That was what really was the propulsion for Stargate. It was Rick [Richard Dean Anderson], Amanda, Chris [Judge], and Michael [Shanks]. And that was what started the propulsion with it. And the fact that it was Brad and Jonathan [Glassner], Brad and Robert [Cooper], and all the other writers taking these four characters that people loved so much and giving them these amazing stories.

GW: The intentionality of the relationships.

MW: Yes, absolutely. Yeah, the relationship between these four characters. I should say it is not Amanda, Rick, Chris, and Michael — it’s the characters of Daniel, Carter, Teal’c, and O’Neill that really started it.

And then like I said, whenever I say that — it’s not four characters. It was Don [Davis], it was Ben [Browder], it was Claudia [Black] — it was everybody that came in to do it. Corin [Nemec]. Everybody that stepped into those uniforms. It was all about them. And everybody you see at all these conventions, all these actors that were here. That’s what made Stargate. And it was that intention to keep that story being told in such an amazing way.

GW: Martin Wood, enjoy your convention. Thanks for your time.

MW: Thank you for the time, I appreciate this.

Don’t miss our full coverage from Gatecon: The Invasion! We’re still catching up on our final interviews from the Vancouver event, so subscribe to GateWorld Interviews wherever you get your podcasts to hear more behind the scenes of Stargate.