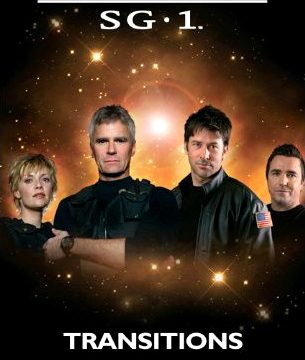 Since June 2004 Fandemonium Books has brought Stargate fans original novels set in the worlds of SG-1 and Atlantis. The publishing industry has experienced tremendous change in that time, and the soaring popularity of ebooks and ebook readers like the Amazon Kindle and the Barnes and Noble Nook promise more drastic change to come. Now the Stargate novelizations have entered the world of digital publishing.

“The ebook is the new paperback and we’re really excited about what it means for the future of Stargate novels,” Fandemonium publishers Tom and Sally Malcolm told GateWorld in a recent conversation. “Over the last twelve months, the uptake of ebooks has really been astonishing — driven, no doubt, by the price-drop in ebook readers. In the current economic climate, it makes financial sense for avid readers to invest in an ebook reader and then download books for far less than they’d have to pay for a hard copy.”

More than a dozen titles from the series are currently available as ebooks from Amazon.com and Amazon.co.uk, perfect for that new Kindle

you got for Christmas. These include:

But fear not, readers who prefer paperback copies over their electronic companions. While Fandemonium is transitioning to an ebook-centric business model, paper versions of their titles will still be made available via print-on-demand technology. “From a business point of view this is actually much simpler,” the two said. “When books are sold through usual distribution channels (i.e. bookstores) we don’t see any income for six to twelve months after sale, which is very problematic in terms of cash-flow. In fact, the entire book distribution system has been geared in favor of the bookstores and the distributors and to the disadvantage of the publisher — so if we can bypass that system, it will make our business stronger.

“In addition, distributing new titles as ebooks and P.O.D. will give us much more control over our publishing schedule. We hope to be able to get more books out, faster — and it’s now economically viable to make all of our back catalogue available. At the moment, only Stargate SG-1: Transitions and Stargate Atlantis: Allegiance are available as print-on-demand, but we’re working on getting P.O.D. facilities available for all our out of print titles, and maybe the option of buying our books in hard back.” 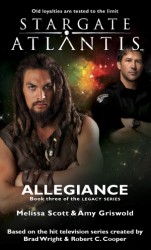 By having more control over their expenses and production, and “because of the economics of ebook publishing, sales volume becomes less important because there are fewer upfront costs to cover. This means we can publish books that may not have such wide appeal, but that we think a narrower group of fans might really enjoy. For example, we’ve talked with the Stargate Atlantis: Legacy authors about a book that focuses on the history of the Wraith, and with another group of writers about a new series of Stargate stories based on one of the SG-1 characters.

“These are only talks at this point, and would need approval by MGM, but it’s the kind of thing that the economics of ebook publishing will make possible. For us, that’s a really exciting prospect!”

The new Stargate ebooks are currently priced at just $4.99, making them about 40 percent less expensive than the traditional mass market price and 50 percent lower than the price of the new print-on-demand titles (Transitions and Allegiance). All told, by embracing ebooks, Fandemonium will provide more titles at more affordable pricing and ensure that Stargate titles never go out of print.

Finally, we wanted to know a little about Fandemonium’s two most recent titles:

“Stargate SG-1: Transitions is a fantastic book!” the publishers rave. “It’s Sabine C. Bauer’s fourth Stargate novel (after Trial By Fire, Survival of the Fittest, and Mirror, Mirror) and she brings her usual meticulous plotting to a story that spans both our galaxy and Pegasus. Although an SG-1 novel, it features a whole field of action taking place on Atlantis, and Sabine ties both stories together with the flare fans have come to expect from her writing. The finale of the book is totally kick-ass — fans of both SG-1 and SGA will love it because it brings all our favourite characters together for a really thrilling ending.

“And we now have another new book out: SGA Allegiance, Book Three of the Legacy series. This one picks up right where Stargate Atlantis: The Lost left off — so for those readers who’ve been waiting to find out what happens next, the wait is over!

“The Legacy series is proving hugely popular, and we are not surprised at all because it’s beautifully written by a fantastic group of authors who genuinely love the characters, know them inside out, and are really deepening our understanding of the Pegasus Galaxy and all its inhabitants. The way they’re exploring Wraith culture is phenomenal.”

To stay up-to-date with Fandemonium’s new titles (and the re-releases of the currently out-of-print catalog), subscribe to their newsletter and follow them on Twitter. And keep your browser locked on GateWorld and our Books section for updates!

I’m happy to see so much info about the Stargate books. I’ve read almost all of them by now and am patiently(?) waiting for new ones to come out. However, given that all these authors are Stargate fans and have watched the series, it would be really nice if they could get their facts correct. Unless, of course, they are changing them to suit themselves. I’ve come across numerous errors in all the books about things that happened throughout the series, and I see no reason for them having been changed. For instance, in one book Cassie is remembering the… Read more »

Roswell (SG1) and Exogenesis (Atlantis) are both a great read! I recommend them, as it was easy to see the former as an unused film script, and the latter a two part special of that series, in novel form!

Are there any books that specifically focus on Carson Beckett at all, or have him central to the main plot of the story?

Thunderbird2 – Carson has a fair bit in “Transitions”, which is a combination of SG1 and SGA. I believe he had a small part in “The Chosen”. None of the others specifically focus on him, though.

The quality of Transitions can not be trumpeted enough. It fills in the nigh-inexcusable gap between SG-1 Seasons 8 and 9 absolutely masterfully, to the point where even a dork like me will just ignore the minor timeline inconsistencies to enjoy a great story.

I’m really happy about this, especially since I got an e-reader for my birthday. I loved most of the Atlantis books, but I’m not too much of a fan of the legacy series, because as agatha said, there seems to have been very little study of the show for it, and the geeky details it needs isn’t there, especially on the wraith parts. There is also massive focus on Teyla and Sheppard as a couple, which in my sense has no room in an official book. So if you are not a fan of this couple or couples in general,… Read more »

Just to clarify something from “missflesh’s” comment. I said nothing about the “Legacy” series in my first post. In fact, I wasn’t referring to anything in the Legacy series, which I have greatly enjoyed and am looking forward to the rest of the series. The comments I made were in reference to a couple of SG1 books, not to any SGA books.

Oh, my bad agatha, I apologise for misunderstanding.

I have been reading the novels since last year. I never thought when I started watching Stargate SG-1 in January 2010, I would ever get sucked into everything else (spin-offs, novels, compilation books). Now I watch Stargate Atlantis avidly and have read six novels (First Do No Harm, Sacrifice Moon, Survival of the Fittest, City of the Gods, The Power Behind the Throne, and Transitions) since March 2011, and am now reading my seventh, Trial by Fire, with two more in waiting on my iPad’s Nook app (Barque of Heaven and Siren Song) and am anxiously awaiting Ocean of Dust.… Read more »

I’ve ended up reading all of the novels, mostly on Kindle. They range from being a mildly good read to occasionally quite gripping, depending on the authors. They are the first and only novelizations of a TV series that I’ve read, and I hope that they keep on coming. They have been a pretty satisfying fix for me.

I did omit that there is on Amazon one Stargate Universe story for e-books: Air (Obviously the novelization of the pilot.) For those of us us that liked SGU, I really hope someone steps up and gives us more of that story too.

As someone that doesn’t have, nor desire an e-reader, I’m not too fond of this. I assume now I’ll have to pay tax and shipping for a P.O.D of any new books, which means I’ll probably have to pay even more then in stores. (Plus I used my University Book Store rebate to get 7 or 8 of the books this last fall). I’d prefer being able to get them from Barnes & Noble just for ease.

@bluewater1 – I was on the edge of my seat during Do No Harm and Survival of the Fittest, it only took me two weeks to read each one. I never believed I would get sucked into the series!

For “edge of the seat” type stories, I found that “A Matter of Honor”, “The Cost of Honor”, “Survival of the Fittest”, “City of the Gods” to have some of the most nail-biting scenes. The other stories had some great scenes as well, but those four are my favorites (plus “Roswell”).

Legacy series is excellent just wish they had stayed with th originally planned release dates. I think we’d be waiting for book 6 right now not 4. Well I’ll agree that there are some minor continuity issues in the book. There no worse then the show it’s self. Over the course of all three series they made so many continuity errors I stopped keeping track. Even David Blue said in an interview that he would see things in the script that didn’t fit with continuity and the producers would tell him this is sci-fi lighten up. A little creative lee… Read more »

Will start to buy each one at a time, listen to the podcast over the years know the e books will be great.