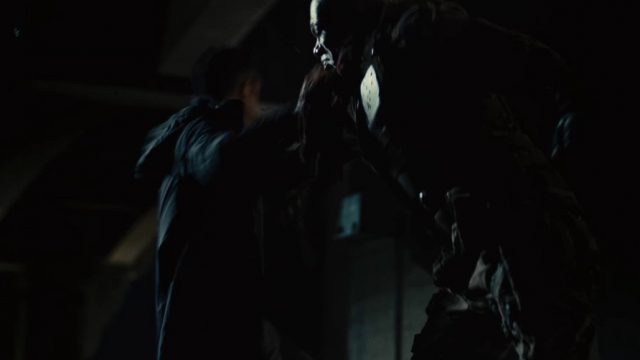 Last summer we reported that former Stargate SG-1 co-star Christopher Judge (“Teal’c”) had been cast in The Dark Knight Rises, the third and final Batman film from director Christopher Nolan. Our very first look at Judge is here, courtesy of the just-released third trailer for the film.

Judge’s blink-and-you’ll-miss it shot is around minute 1:17. Click on the image for a larger view.

It’s still not clear what Judge’s role is, though we’re guessing he may be one of villain Bane’s muscle-bound thugs. In the shot he is seen shoving a man into a pit.

(Thanks to Geodesic for the tip!)

“In the shot he is seen shoving a man into a pit.”

Not just any man, it looks like Joseph Gordon-Levitt he’s throwing into the pit. Could be interesting to see him post-SG1. Haven’t seen him in anything else since Continuum.

Nolan has done an amazing job with the Batman franchise, and it will be really hard to see anyone top it. Can’t wait to see Judge in action again!

Just saw him on an episode of The Mentalist last Friday (UK) and Kawalski was also in it!

@Jowiega, I used to do the same with Stargate extras. Now I get to do it with the main cast too. Hey! He was on SG-1!

man i hope this guy has been saving his sg1 money. i dont want to see him popping up in odd roles just to get some food and rent money.

Let’s be honest. He’s probably going to get his butt kicked by Batman or another protagonist in 15 seconds or less. That’s what happens to just about every Stargate cast member that does guest spots in other TV shows or movies. Just look at Cliff Simon and Paul McGillon in 24 and Christopher Judge in NCIS: LA.

Hey, methinks Judge isn’t complaining. Work is work in this economy- even for TV stars, my friend…

Chris was real cool,i spent an hour with him at a meet and greet in vancouver,he said he got hit in the eye and his eye started bleeding,so they had to film one side,he wouldnt say who the person who is in the scence was though,got to hear some cool stories.

So in the second trailer at 55 seconds…is that Chris on the bottom left on the stairs? Of course it could be some other big bald guy :)
http://www.youtube.com/watch?v=OEuLVRgmuRI&feature=fvst