A new ally is discovered, the Wraith turn on one another, and a deadly new enemy is created. It’s the best of Stargate Atlantis Season Two!

All this month we’ve been watching SGA‘s second year as part of the Stargate Rewatch — a massive Stargate community event where we revisit all 17 seasons and three movies from the history of the franchise. You voted on your favorite episode, guest star, character moments, technology, and more from this season. Now the results are in!

We had two super-close races this month: All three nominees for the Best Ronon Moment were separated by only 11 votes, and the fans’ pick for the Best Weir Moment squeaked out a win by just two votes.

Stay tuned for the August kick-off post to find out how you can nominate your favorites for the SGA Season Three Awards. 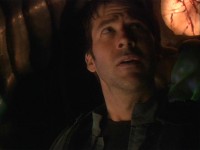 Turning the Tables. Sheppard uses a Wraith dart to escape a hive ship and gets it fighting with a second hive, leading to the destruction of both enemy vessels. 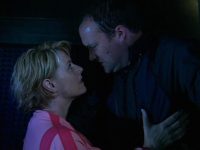 ‘One Last Romp?’ While trapped in a sinking Puddle Jumper beneath Lantea’s great ocean, McKay creates an hallucination of an old friend — a sexy Samantha Carter — to help him survive.

From: “Grace Under Pressure” 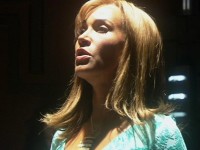 Beyond the Night. After Charin, the woman Teyla considers to be her last living relative, dies, Teyla honors her memory by performing the Ring Ceremony over her body. 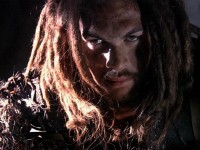 Dangerous Liaison. The team meets Ronon for the first time when the Runner captures Sheppard and Teyla, eventually telling them who and what he is. 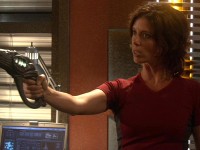 Power Play. Taken over by a vengeful alien entity, Weir manipulates her people to get at another entity that has possessed Colonel Sheppard.

From: “The Long Goodbye” 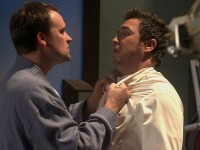 The Kiss. Beckett receives a passionate kiss from Laura Cadman — who is still in Rodney’s body — who has had a crush on him since her arrival in Atlantis. 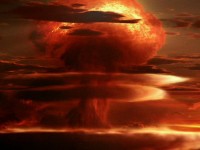 Dangerous Ruse. The Atlantis team members each do their part to execute a daring plan, hiding the city from the Wraith by faking its destruction. 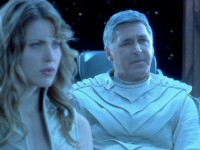 More than a year after they moved into the Ancients’ abandoned city, John Sheppard’s team encountered the Aurora and her Lantean crew. With a new look at their ships and tech, their conflict with the Wraith, and their valiance, the episode makes the Ancients the best alien race of the season. 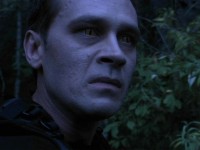 The Wraith were, for the most part, a nameless and monolithic evil — until the Atlantis team themselves gave them a name and a face in Michael, a hybrid born from their attempts to strip out iratus DNA and turn the enemy into a human. He’d be back … with a vengeance. 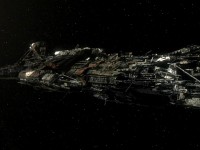 Season Two introduced us to the Ancients’ chief weapon in the battle against the Wraith 10,000 years ago: a fleet of powerful warships, some of which are still alive and kicking today. The team encountered the lost ship Aurora before coming into possession of the Orion. 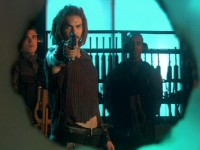 A bad-ass like Ronon Dex has to travel with an equally bad-ass weapon — a unique handgun that fires energy pulses. It has two settings — Stun and BOOM — and, as we learn later, the technology probably originates with the Travelers. 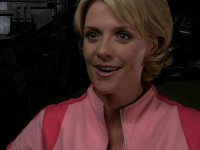 Rodney’s hallucination makes for the second Atlantis appearance by SG-1‘s Amanda Tapping (the first was a quick cameo in “Letters From Pegasus”). She brought with her some of that Carter-McKay magic that makes their relationship both bristly and sexually-charged (well, for McKay at least). And mad props to Tapping, who made the appearance only a short time after the birth of her daughter.

From: “Grace Under Pressure” 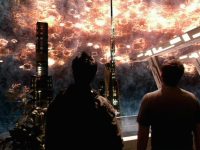 With Atlantis on the verge of defeat, the Daedalus arrives with reinforcements — but the Wraith’s own fleet of reinforcements is on the way. As the team searches for a way to hold off the assault and save the city from falling, Lt. Ford is juiced up on Wraith enzyme and turns on his friends.

Next month’s Stargate Rewatch is SGA Season Three! Join us as we revisit all 17 seasons of Stargate history from the beginning — one season each month, through the end of 2012. Stay tuned to find out how to nominate your favorite episodes and character moments for the August awards.

i would like to know why your are not continuing Atlantac. me and my family love this program and hope that you reconsider and continue this program it is very interesting

@sundown you do know this is a fansite and not an official method of talking with the creators of the Atlantis series, right? It’s sad that most people think Ronon’s best moment was his introduction. Guess it shows this season he didn’t have much. And Weir being possessed is a Weir moment? Maybe an good Torri Higginson moment. I think the shippers are taking over the poll with the Weir moment hinting at Sheppard and her kissing and the McKay & Beckett kiss being the the top vote. Why are people rallying at Ronon’s gun being cool? It’s a phaser… Read more »

This poll is simply a fun way to, as a group, review a group of series that we all enjoyed. It’s best viewed in that perspective. In our diversity, we all have different characters and aspects of the series that we enjoy more than others. It’s a large part of what contributed to the success of the franchise.

Congrats to the winners! Most of what I voted for didn’t win, but it’s all in fun!

Wow, I think this is the first time almost everything I voted for didn’t win. Also, I agree with the two above on being confused about Weir being possessed being a Weir moment.

@The_Elite_Elite-
I agree with you… one of the reasons why I haven’t voted these past few ballots.

I agree with Sylvia that it’s all in good fun regardless, but *my goodness*… am I that out of sync with the rest of Gate fandom these days?