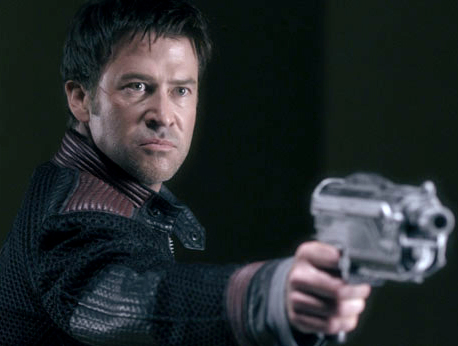 That live-action adaptation of the sci-fi comic book Metal Hurlant we told you about last year is nearly here (story).  Stargate Atlantis‘s Joe Flanigan plays a soldier alongside Kelly Brook in one of the 30-minute episodes of the innovative anthology series.

Producers of Metal Hurlant Chronicles have reportedly had some difficulty finding international broadcasters, but they debuted the series at Comic-Con in July and are ready to premiere the series for French fans tonight on France 4.

Flanigan’s episode, “Masters of Destiny,” is set to air November 3.

Viewers in France will also be able to buy the first season on DVD and Blu-ray on November 2.

We’ll keep our ears open for U.S. and U.K. broadcasters to pick up the series. Stay tuned, and check out the short teaser and the new, full-length trailer below!

Hot! Hope to get the DVD somehow here in the US.

I sure hope we get it here in the states, I really want to see the full series but Joe’s episode for sure.

Looks pretty decent for a sci-fi series, I wish Joe could have a bigger role on it.

I’ve seen a few scenes. It’s hilariously bad. Kelly Brook is especially poor, but I can think of at least two great reasons why she was cast.