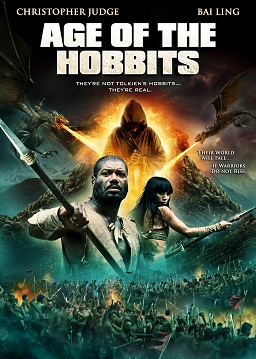 The producers of the upcoming Christmas blockbuster The Hobbit have pulled the trigger on that lawsuit against the producers of Age of the Hobbits, a direct-to-DVD “mockbuster” film starring Stargate SG-1‘s Christopher Judge.

As we reported a few weeks ago, Hobbit producers New Line Cinema, Warner Bros., and MGM had reached out to Global Asylum about similarities between the two films — and particularly the use of the term “Hobbit,” coined by J.R.R. Tolkien in his 1937 novel.

But the film’s production studio claims that their story is based on a real-life tribe of people recently discovered in Indonesia, dubbed Homo Floresiensis and referred to ubiquitously in archaeology literature as “Hobbits.” The film’s title could thus be construed as in accordance with the legal doctrine of fair use.

The plaintiffs are asking the court to bar Asylum from using the term “Hobbits” and to order all infringing ad materials and packaging destroyed.

Asylum’s business model seems to be based on capitalizing on big-screen films, and their promotional engines, for some name recognition. When facing similar legal challenges in the past, Asylum has altered film titles and packaging art — such as with the release earlier this year of American Warships, which was originally titled American Battleship and sported a cover design quite similar to the Universal/Hasbro film Battleship.

Despite repeatedly being slapped on the hand for its practices, Asylum appears to benefit even from the controversy — with news coverage about the dispute from Web sites (like this one).

Read the full story at The Hollywood Reporter. Age of the Hobbits (or whatever it ends up titled) hits the shelves on December 11.

There are dragons on the cover, are there real too?

Who cares. Leave it alone. It’s not like they’re taking money out of their pockets.

Christopher Judge should be able to get a better job than working on mockbusters. :/

I kind of tire of Asylum’s nonsense, so it’s good to see them get knocked down a peg or two.

Also the assertion that Asylum does that kind of research is absolutely hilarious.

Considering they’re currently in the process of attempting to destroy one of my local pubs ‘The Hobbit’ in Southampton, this does not surprise me in the slightest.

I think the bigger crime being committed here is that this film looks horrible.

As much as I dislike Asylum using the Name “Hobbits” is not a bad thing at all.Make sure and do some Research and not Comment without doing that. My points: 1.Hobbit is a Term first used in the 1800’s and then used by Tolkien.He did not invent the name “Hobbits” and there is no reason why he or for that fact any person or entity can just go and “Own” a Word.Here is some additional info on this “Point”. The word also turns up in a very long list of folkloric supernatural creatures in the writings of Michael Aislabie Denham… Read more »

gorehound, I agree with you. But we are talking about Asylum. The guys behind ‘Transmorphers’ going to dvd at the same time Transformers were released. This movie is expected to be releases 3 days before ‘The hobbit’, we all know they are releasing this just for this movie, otherwise they could have released them in any other date. Think about how many (dumb) people will go watch this movie instead the Hobbit just for the misunderstanding.

You have to wonder if New Line Cinema, Warner Bros., and MGM thing that Christopher Judge is a Hobbit.

Christohper Judge is the “Gentle Giant” of Hobbits !

Look… IT’s clear to me why they chose Judge to play this role. He has successfully fought and survived a CGI dragon in his previous jobs. It was absolutely paramount that they have someone who could survive the initial couple of seconds with a CGI type dragon. It’s not a common skill on the resume.

Leave Christopher Judge alone he is a good man an he doesn’t Deserve this from Warner Bros I have stop watching them an started to go to MGM so please keep it the work Mr. Judge an thank you for playing in the Stargate SG-1,Stargate Atlantis your a good man.