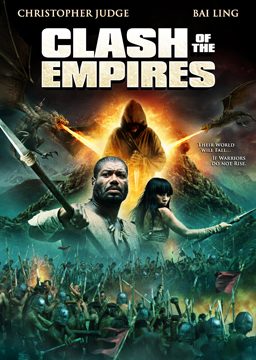 Two days after being hit with an injunction by a federal judge (story), film producer Global Asylum has given its newest release a new title: Age of the Hobbits is now Clash of the Empires, according to the official site.

A theatrical release is also going ahead in Cambodia, where the movie was shot, under the title The History of Mankind.

It won’t be enough to end court proceedings, however. Warner Bros., New Line Cinema, MGM, and producer Saul Zaentz still have an active lawsuit against Asylum for infringing on their trademark. The Hobbit: An Unexpected Journey hits theaters worldwide this week, as the first of a trilogy.

The injunction prevents Asylum from distributing the movie under the Age of the Hobbits title. So while you might see Clash of the Empires show up in stores before the January 28 hearing, it will only be after changes to all the cover art, DVD menu screens, credits, and marketing material have made it through the distribution pipe.

Read more at The Hollywood Reporter.

Utterly ridiculous. Anyone who is confused by The Hobbit and Age of the Hobbits deserve what they get.

Only and idiot would see Chris Judge on the cover and think “this is Peter Jackson’s Hobbit”.

I think everyone in the whole world has seen the marketing campaign done for the Hobbit, with the artwork, trailers, interviews, etc.

So what if The Asylum gets a boost from The Hobbit, it’s not like people will not go see The Hobbit in theaters because they see a DVD on the shelf that has a similar title.

They got a huge amount of publicity out of it though (shrewd marketing tactics!!)

Well, they did get away with releasing “Transmorphers” when Transformers was in theaters.

Won’t people get this mixed up with “Clash of the Titans”? j/k BTW

Already been released anyways on P2P with the original Title.
The Coppyright Maximalists could not stop this one.

I don’t know which is worse. If it is true Asylum thinking of making a buck off of the hobbit or the people of the hobbit thinking their audience is stupid enough to get confused on the title. The only ones who might do that is elderly people who don’t know better snd buying it for a relative or grandchild.

I saw the post for this with “Age of the Hobbits” in whatever Canada’s version of Red Box is. I want to get it as a collector’s item.