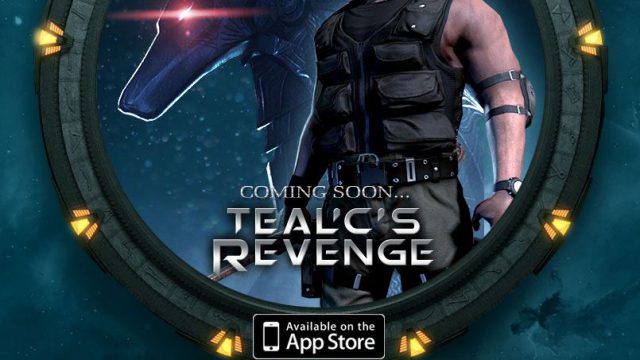 If you’ve been waiting to do more with your Stargate Command app that made its debut a few months ago, here’s your chance! Today Arkalis Interactive is releasing the first expansion for the iOS app: “Teal’c’s Revenge.”

It’s a third-person, hand-to-hand combat game where you help Teal’c combat a range of enemies invading the S.G.C. It has tight game mechanics and beautiful graphics — but you can read our full review here.

We also have a screencap gallery for a closer look at the game.

From the press release:

Stargate Command is under attack and only Teal’c’s fabled combat skills can save Earth from total destruction. Reflexes are critical as you parry, block and unleash powerful attacks to earn XP, improve your skills and save Stargate Command from enemy Goa’uld, Jaffa and Replicators that plagued SG-1 through 10 seasons of the TV franchise.

Download the free Stargate Command app now from iTunes, and look for the “Teal’c’s Revenge” add-on for just for 99 cents (50 percent off) during launch week.

The app is compatible with the iPad 2, the “new” iPad, iPad Mini, iPhone 4, 4S and 5. (There’s still no word on an Android version, but we’ll keep our ears open and let you know what we hear.)

More expansions are expected in the months ahead. Original Stargate SG-1 cast members Michael Shanks, Amanda Tapping, and Richard Dean Anderson have been dropping hints on Twitter recently about recording voice-over work for Stargate, which looks like it may be for future Stargate Command updates. Or, it may be for a stand-alone app, under the working title Stargate Unleashed. Stay tuned to GateWorld!

Nice! Pity they’re not releasing this stuff for Android though, then I’d buy it.

i’d definitely buy it if they release a version for windows phone.

I would need to wait for a Android version. It is nice however to see a new Stargate game.

And I do not own a Smart Phone nor do I want to own one so I guess us “Dinosaurs” are going to have to be left out.
What a drag ! Me want Stargate Windows Game !

Let me play it on my computer, then maybe. Don’t have a “smart”phone let alone an iphone. Also I want to know which console quality.

Just install bluestacks on your PC and buy it through that. It runs decent for pretty much any app on any average PC.

It’s free ;) I’m sure there is a portable version around by now so you can drag it around on a flash drive lol.

Isn’t BlueStacks only for Android apps(which this game is currently not available as)?

I bought it. It’s fun. Like Infinity Blade II.