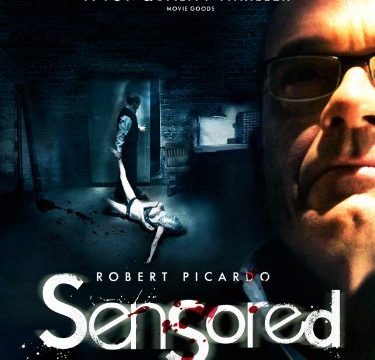 Stargate actor Robert Picardo goes dark in a brand new independent film, Sensored. The movie is now out on DVD and online video-on-demand.

Sensored is a psychological thriller from director Ryan Todd.  We first told you about the movie back in 2009, and producers are thrilled to finally have it available to buy.  Picardo plays a children’s storybook author who is slowly losing his mind.

Children’s book author Wade Mixon is trying to keep his frayed mind from unraveling. His stability and lucidity are in question, and his thoughts are increasingly being invaded by the terror of this murderous past and present. Wade’s battle with his own demons causes him to believe there is a conspiracy against him. The line between reality and delusion is steadily growing more and more uncertain and the fight between good and evil within his mind is beginning to dilute any chance he has at living in the here and now. In the balance hangs Wade’s only shred of existence, his legacy, and he will stop at nothing to prove its reality.

It’s a lead role for the actor, who played Richard Woolsey in appearances on all three Stargate series (and was a series regular in the final season of Atlantis).

GateWorld talked with Picardo about the movie in our 2009 video interview. Watch here, starting around the 18:00 mark.

Pick up Sensored now on DVD

to rent or to own — and support GateWorld with your purchase!

Visit the film’s official Web site at SensoredTheMovie.com, and check out the trailer below. (Beware of disturbing images, as the film is rated R.)

Robert Picardo is awesome. Needs to do another picture with Joe Dante.

… and of course…more stargate!

i cant wait to see it

Now that is one movie I will pay for.