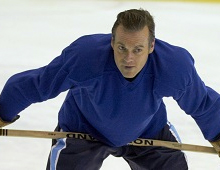 Stargate SG-1‘s Michael Shanks hits the ice as the legendary Gordie Howe in Mr. Hockey: The Gordie Howe Story. The Hallmark Channel announced today that it will air the TV movie on Saturday, May 4 (9/8c).

Shanks (Stargate‘s Daniel Jackson) stars as Howe, who played for the Detroit Red Wings for most of his career. In the movie the older Howe comes out of retirement when his wife Colleen (Kathleen Robertson, Beverly Hills: 90210) brokers a deal for him to play alongside his sons in the newly-formed World Hockey Association (WHA).

Mr. Hockey will air in Canada on April 28, according to Michael Shanks Online.

Meanwhile, Shanks’ new supernatural medical drama Saving Hope will air in Canada this summer and has had its order expanded to 18 episodes.

Head over to The Futon Critic to see the full press release.

I love to see everything with Michael Shanks. He is good in most roles.
Shanks fan.