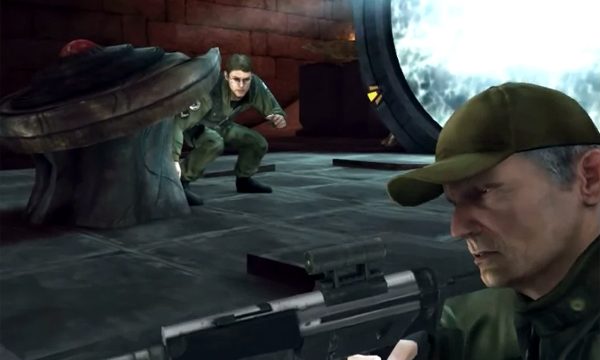 UPDATE: Arkalis now says that Unleashed will be available on iOS from March 14.

Arkalis Interactive has just released a new video loaded with footage from Stargate SG-1: Unleashed, including the first look at the game play itself.

The interactive adventure features the voices of the entire original SG-1 team. It will be available for iOS devices on March 7, and next month for Android.

The new teaser shows offworld exploration, a Jaffa, new alien technology, and General Hammond with the team at Stargate Command.

Check out the new video below, followed by the original trailer. And stick with GateWorld for more in the days ahead!

Looks awesome, but I hope they bring it to Windows 8 platform too.

Wow… bout time they did something! I’ve got my Transformer Prime ready to rock it!

I guess it won’t be happening post Season 10, since Hammond is still alive. Glad Don Davis can still be remembered in this part of the franchise.

Its a story that deserves to be carried on because it always kept a fresh perspective and there truly were infinite paths you could go with the story! Don’t laugh but that’s how Baywatch went on and spawned off into Baywatch nights and stuff! I cant stand most dramas on Tv these days but I can watch 11 yr old Stargate re-runs like a M’F’R!!!

Judging by what little we see of the UI, my guess is it’ll be setup a lot like the Jurassic Park game that was released a couple years ago, a “point and click” style interactive adventure game. I’m hoping this gets released on PC somehow, it won’t be as awesome on my iPhone.

With the original cast on board, they really should consider expanding this into a full fledged PC game, not just for mobiles. This is the perfect way to keep Stargate alive while we wait for the inevitable reboot of the franchise.

Hope you make a PC Version of this Game.

Yea, still not up on the App store.

I can’t seem to find it in the App Store, has anyone had any better luck?

The Arkalis website now says it is coming on the 14th.

I just find this funny new video with Chris Judge recording the voice over for Stargate Unleashed http://youtu.be/l6h6BmBX1lc