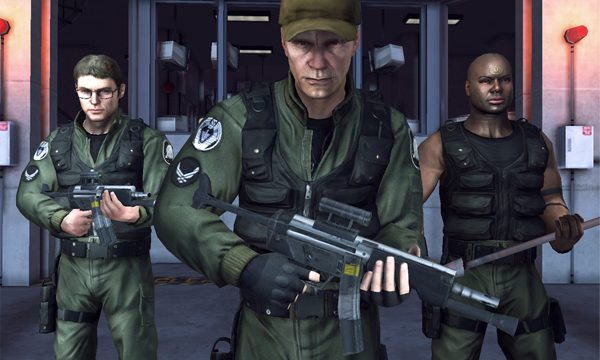 The much-anticipated mobile game Stargate SG-1: Unleashed has arrived!  The interactive “Episode 1” is available today at the iTunes Store for $4.99.

Unleashed will be available for Android devices in April.

Here’s what developer Arkalis Interactive says about the game:

Stargate SG-1: Unleashed’s story revolves around the SG-1 team in an all new adventure that takes them through the Stargate in an effort to reveal the mysteries behind a new and dangerous Goa’uld enemy. Players are engaged in the third-person adventure, commanding Colonel O’Neill, and characters Captain Carter and Dr. Jackson as they travel to unknown worlds, defeat Jaffa warriors, infiltrate a Goa’uld slave camp, explore mysterious temples, decipher new technology and solve cryptic puzzles.

Pick up Stargate SG-1: Unleashed today at the iTunes Store! We’ll have more on the game and future releases from Arkalis — so keep your browser locked on GateWorld.

When will we see an Android version?

So far it’s pretty great. AWESOME having most of the cast back. And overall just great to finally have an SG-1 game. Who knows, maybe if this sells well they will dust off Allegiance and finally release it. But the one glaringly huge issue for me (and might be for other fans) is the sound effects. When the SGC goes on alert, that sound is pretty iconic for me. It’s so annoyingly bad in the game and its not even close. The iris sound effect is there but the P90 gunfire is wrong. It’s little things like that which are… Read more »

I like it! Much more fun than I expected for a mobile game. The involvement of the original actors makes it epic too and leaves me wanting more scripted sequences than the actual game ;) Allthough I haven’t progressed that far I really like the story! So good job on the game everyone. Looking forward to more!

How are non-Apple owners supposed to get this exactly? I don’t see it on Steam!

Buy’d the game even i dont have device to play with but at least someone did walktrough and i can see it like any episode in original series :D

Any news on the Android release date?

I think it’s absolutely disgusting that this is STILL Apple only. What a way to treat loyal fans. I was told an Android version would be out in April, with only 8 days of the month left there still isn’t one!

Also, can anyone please explain how Sekhmet is the Goa’uld in this game when she died on Earth and was spliced/cloaned with that Anna lass by the ex Nazi doctor guy?