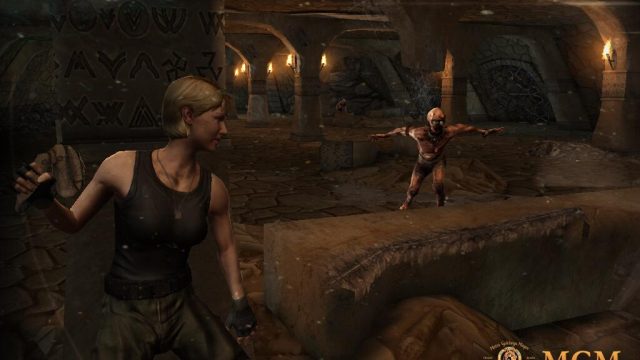 Episode 2 of Stargate SG-1: Unleashed hit the iTunes store on November 7, and is currently available for compatible iOS devices.  As with Episode 1, the new release is trailing a little behind on the Android platform, but should be available via Google Play and the Amazon Appstore

in the next few weeks.

Like Episode 1, the new release runs $4.99. It features an interactive 3D environment, enemy combat, and a mission where you can play as members of SG-1.

Episode 2 continues the story launched in the spring 2013 debut, reuniting the original SG-1 cast in a new adventure that sees them square off against the Goa’uld Sekhmet.  It’s part interactive game, part animated episode.

Producer Arkalis Interactive says that they are currently aiming for a total of three episodes for this story.  Additional Stargate releases beyond that will depend on fan reaction.

Watch the original trailer below, and download Episode 2 for iOS now!

Do they not want more money?

I watched it on youtube and I thought it was very well done. It was so nice to see some official new stargate stuff!
I’ll be buying this when it comes out for android even if my phone can’t run it just to support stargate! :)

[…] reasonable than the nine months we have waited between Episodes 1 and 2. Beyond the third episode, GateWorld.net has reported that Arkalis will be basing the continuation of the project on fan reaction. So, if […]

still don’t have a smartphone, but i watched it on youtube yesterday and i LOVE it!!

it’s got everything i love, which is sam, sam whump, sam/jack, and teaminess!!

i also think they’ve done a great job with the goaulds/jaffa. and the storyline!!

I love it because its Stargate, but $5 per episode i feel is kinda playin on SG fans desperation for more SG content. And other games with way more content and better gameplay exist in this market, we are paying for the actors i believe but to complete 6 episodes will be about 3 years away and then where will it be, next gen consoles are here, 4k TV’s and these episodes have cost as much as an equivalent xbox or ps title I know everyone has got to make a buck, but lower price = more sales, i noticed… Read more »

Does it exist for Android? If not, no buy.

I watched the first story part of episode 1 on youtube, I may buy it someday when I have time to lose. It wasn’t a bad stor, it just felt like the gameplay was ruining the episode overall.

[…] Interactive went quiet shortly after released Stargate SG1: Unleashed episode 2 for iOS devices in November 10, 2013. Even before the release of the second episode Arkalis Interactive there were indications of […]