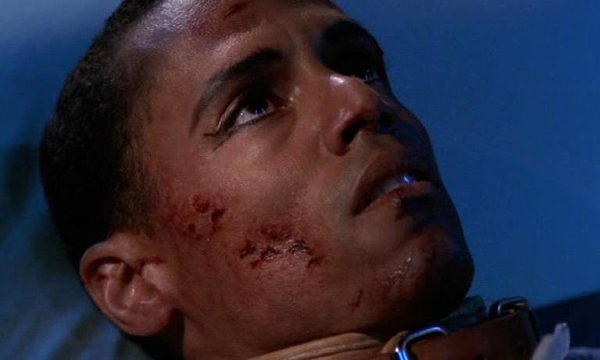 Apophis, SG-1’s greatest enemy, seeks sanctuary from Sokar and ends up near death in the S.G.C. infirmary.

Rewatch “Serpent’s Song” this week! Then post your comments below, or head over to the “Serpent’s Song” discussion thread and see what people were saying back in the day. What are your favorite moments?

i really liked the episode. it was interesting to see the good guys having to show compassion to someone that wouldn’t show them an ounce of it. well, they didn’t ‘have’ to, but being the ppl that they are, they couldn’t help but to start feeling for this dying being.

one of my fave scenes is when daniel talks to the man stuck inside the monster, trying to comfort him and giving him the peace he needed and the knowledge that he would reunite with his loved ones.

this is stargate at it’s best!

Good episode. Feel bad for the host though thinking his nightmare is over only for him to most likely be revived with apophis and tortured again

Great episode. One would think “how the mighty have fallen”. My biggest thought was trying to imagine what was going through the mind of the host when he emerged. I was thinking have Daniel tell him, you will die, only to have to awaken again and again to relive your everlasting nightmare. I felt so bad for him. Definitely a good episode.

I love this episode, I actually watched it last Saturday! I love how Jack showed concern for Sam when she seemed to show some discomfort during her “flashback.” You know he is concerned when he calls her “Sam.” I love how Jack said the same thing I was thinking regarding giving Apophis over by throwing him through the ‘Gate – I wanted them to do the same thing! Daniel helping the host die peacefully was beautiful.