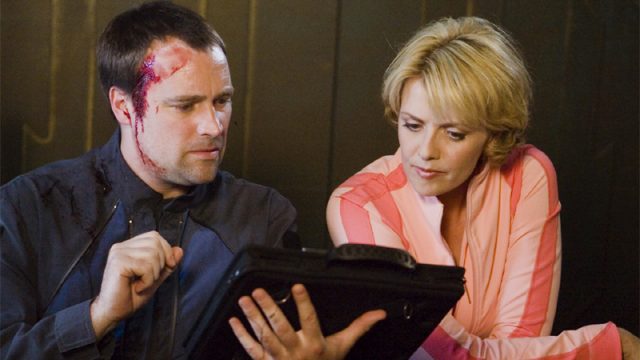 “Grace Under Pressure” on GateWorld:

Download “Grace Under Pressure” now from Amazon or iTunes!

Rewatch “Grace Under Pressure” this week! Then post your comments below, or head over to the episode discussion forum and see what people were saying back in the day. What are your favorite moments?

That last fact reminded me that, that world is doomed now.

Oh, I loved this one. This was in fact, the first Atlantis episode I ever saw. (Been in another country on a medical mission for the first year.) Loved the acting, and writting so much, it just got me hooked. Will happily watch it again and again. You never forget your first SGA.

I find it no mere coincidence that I watched this show today (as in I am watching Atlantis in order for the first time) and HAPPEN to be on Gateworld to look up something regarding the novels and notice this feature for the first time ever!! (I’ve only been on here less than a dozen times so it’s not like I check it a lot). How weird is that! This was definitely an interesting episode. I don’t really like Rodney that much but the episode was good. I hope they look more into the life on the planet the giant… Read more »

Another fun fact: Joel Goldsmith was nominated for an Emmy for this episode’s music. I never understood this. Of all the episodes in the entire series to be nominated for a musical Emmy, why this one? Sure it had some cool cues, but a number of other episodes had even cooler cues. Beyond that, Grace Under Pressure immediately follows Critical Mass, which is the episode that contained the song “Beyond the Night”. You’d think that song might take higher priority to be nominated. All I’m saying is that if they’d nominated the music of a different episode, such as The… Read more »

Definitely not one of my favorites. Just kinda blah.