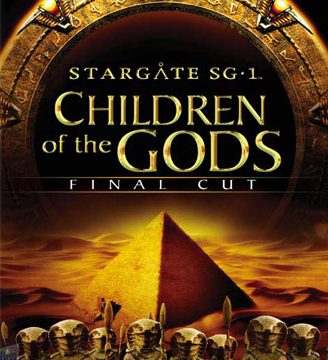 Yep, it’s been 20 years since the day “Children of the Gods” first aired on Showtime — July 27, 1997! To mark the occasion MGM has released the remastered edition Children of the Gods: Final Cut for fans to watch for free on the studio’s official Stargate Command YouTube channel.

It’s only available for a limited time, and from the looks of it it’s not available in some countries.

The 2-part episode was re-edited in 2009 under the direction of Stargate SG-1 co-creator Brad Wright. In addition to updating the visual effects, re-editing key shots, and eliminating some story inconsistencies, Wright had actors such as Christopher Judge (Teal’c) and Peter Williams (Apophis) re-record some or all of their dialogue.

Sha’re’s infamous nude scene — demanded by the network at the time — has also been excised, making Final Cut as family-friendly as the rest of the 10-year television series.

The result is a show that is more cinematic, visually interesting, and in keeping with the texture of the universe that would be built in subsequent years.

Check out GateWorld’s full review of the DVD release, including an index of all the changes and VFX improvements made to the original broadcast edition.

Pick up Children of the Gods: Final Cut on DVD or digital download … and keep watching after the video below has expired.

[UPDATE: Video has been removed]

Stick with GateWorld all summer long
as we celebrate 20 years of Stargate SG-1!

I am able to watch it from Norway, so apparently it’s not US only. Interestingly, it’s available in full 1080p – if I’m not mistaken, the first time ever COTG (or any pre-season 8 episode) has been available in HD. I suspect it’s an upscale, however, as the image looks rather soft.

Not US-only, works fine in Finland as well.

It is only blocked in Australia and some Middle Eastern countries, per Youtube region restriction checker (polsy dot org dot uk).

Thanks for the update. I’m not fond of that particular cut, with its off pacing and my favorite character development moments cut out. Still it’s nice to have this kind of information. You still rock Darren!

“Interestingly, it’s available in full 1080p – if I’m not mistaken, the first time ever COTG (or any pre-season 8 episode) has been available in HD. I suspect it’s an upscale, however, as the image looks rather soft.”

Agreed. It essentially has to be an upscale. The original was masted in SD. However because YouTube tends to maul and videos uploaded in SD, you pretty much have to upscale it to HD to ensure it doesn’t lose a bunch of detail from YouTube’s encoding process.

I thought the two episodes cut into a movie-like feature was really cool when they originally did it, I can understand some essential and necessary cuts/editing needing to be done. What I did not like, was the re-recording of the dialog, Michael Shanks re-recording ALL his lines to move away from the James Spader-like voice impression, was totally unnecessary, and the dialog became more canned and out of place. It really took away from the character overall…because I felt as young as Daniel Jackson was portrayed in the series, he grew up and manned up over time…which obviously changed his… Read more »

No love for Australia. :(