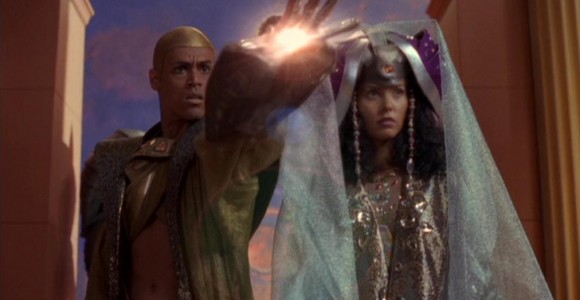 When powerful aliens come through Earth's Stargate, Colonel Jack O'Neill returns to Abydos to retrieve Daniel Jackson, who has discovered that the alien transit system includes much more than the two planets.

More than one year after Colonel Jack O'Neill and archaeologist Daniel Jackson defeated Ra on the planet Abydos ("Stargate" the Movie), the ancient alien artifact called the "Stargate" sits deep within a U.S. military mountain facility, covered and unused. A group of Air Force personnel sit at a small table in the gate room and play cards.

The room begins to shake, and soon the Stargate flares into action. A wormhole opens and a group of alien soldiers, in serpent armor, come through and engage the soldiers in battle. Another figure steps through – this one armored in gold – and takes a female sergeant back through the gate with him.

Earth has been invaded. The Stargate program is reactivated to determine the nature of this new threat, and how to eliminate it. Major Samuels, executive officer of General Hammond (now in charge of the Stargate program), finds Colonel O'Neill. The soldier must return to active duty from retirement after Hammond forces him to confess that his report on the first Stargate mission was falsified. The Abydos Stargate was never destroyed, and Daniel Jackson is alive and well and living with the people of Abydos.

Along with Captain Samantha Carter, an expert on the Stargate technology, O'Neill returns to Abydos and finds Jackson. Jackson takes the group to a room he has discovered in the caves: it is an ancient alien map room, listing thousands of Stargate addresses. The Stargate system is indeed a vast network, linking infinitely more planets than Earth and Abydos.

While they are gone, the young boys of Abydos continue to guard the Stargate. But powerful forces overcome them. It is the same serpent guards, who kill many of the boys and take two people – O'Neill's friend Skaara, and Jackson's wife Sha're – back through the Stargate.

The team arrives back to discover the abductions, and Jackson is convinced to return to Earth in the hopes of finding his wife somewhere through the Stargate. He instructs the people of Abydos to bury the gate for one year. If he does not return with Sha're on the day they unbury it, they are told to bury it again – this time, forever.

Meanwhile, Skaara and Sha're have joined many other people in a giant holding cell – some sort of dungeon in a giant castle. The leader of the guard comes and chooses one woman, who is brought before his leader – who's eyes glow, just like the alien Ra. It is the missing sergeant from Earth. She is stripped naked and examined, then presented to an alien queen – a wormlike organism that resides within the belly of a host woman. The women are being collected from all across the galaxy as potential hosts for this parasitic being, the mate of the serpent leader. The sergeant is rejected by the worm, and the gold-clad alien kills her.

Indeed, O'Neill, Jackson, and Carter conclude, Ra may not have been the last of his race after all. They are assigned to a new field unit: SG-1, whose mission is to perform reconnaissance, determine threats and make peaceful contact with the peoples of alien worlds.

Ferretti, one of O'Neill's men from the original Abydos mission, was in the gate room on Abydos during the attack, and is now in the infirmiry at Stargate Command (the "S.G.C."). Feretti managed to memorize the address of the world to which the aliens escaped, and provides it for SG-1 after he regains consciousness. Back in the palace, the alien queen has chosen her new host: it is Daniel's wife Sha're. She is terrified, stripped naked by the guards before the giant worm burrows into her neck and takes over her body.

SG-1 and SG-2 (the latter commanded by Major Charles Kawalsky) travel through the gate, and find a beautiful forest world. They come across a group of worshippers, and are led to the city of Chulak. There they meet the alien leader and Sha're, his new bride, and are thrown into the dungeon with the refugees. Jackson identifies the leader as Apophis, a god from Egyptian mythology who ruled the night and was a great enemy of Ra.

The leader of Apophis's guard notices O'Neill's digital wrist watch, and is puzzled. "This is not Goa'uld technology," he says. He learns that SG-1 is from Earth, and begins to reveal that his loyalties are not entirely with Apophis.

Soon, Apophis enters the dungeon accompanied by a group of alien "Goa'uld" – parasites who forcefully inhabit human bodies as hosts. Each Goa'uld couple has come to choose a host for their child – to determine who among the refugees will become the "children of the gods." A few are selected and dragged away screaming – including Skaara, O'Neill's close friend from Abydos.

Apophis orders the rest of the prisoners killed, and the guards begin to open fire as the Goa'uld leave. O'Neill shouts to the leader of the guard: "I can save these people! Help me!" He has sensed the man's waivering loyalties, and his plea is heard. The guard tosses his staff weapon to O'Neill, and turns and fires on his own soldiers.

The guards are overcome, and SG-1 escapes with the refugees back toward the Stargate. Apophis and Sha're exit the gate to another world. When SG-1 arrives, Skaara is about to leave through the gate. He turns and walks back toward O'Neill, then shoots him with a hand device. Skaara's eyes glow brightly – he has been taken as a host.

Skaara and those with him leave through the gate, and Daniel dials Earth as an army of guards – called Jaffa – approach from the woods. SG-2 engages the soliders, and an alien worm leaps from a fallen guard into Kawalsky. But the humans escape back to Earth, just in time to meet General Hammond's do-or-die deadline.

O'Neill recommends the Jaffa guard, Teal'c, for membership on SG-1. The team must continue to travel through the Stargate – to locate new technologies, to assess threats to Earth from off world, and to find their missing loved ones.