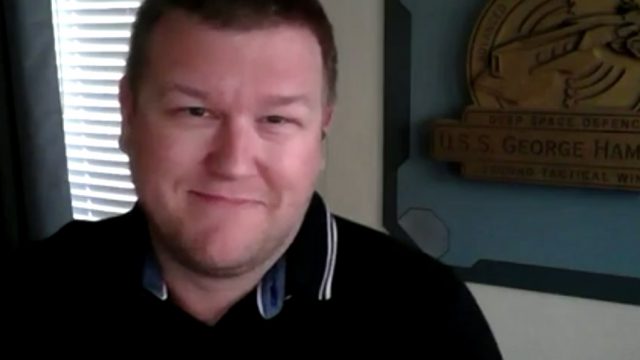 MGM is celebrating Stargate fandom — and twenty years of Stargate SG-1 — with the launch of a brand new podcast.

“The Official Stargate Podcast” makes its debut today, with promises of in-depth discussion, special guests, and a few surprises in upcoming episodes. Have a listen at OfficialStargatePodcast.com.

Hosting the show is none other than GateWorld’s own David Read! David has been with GateWorld since 2004, contributing countless cast and crew interviews, news items, and video features as the site’s co-editor. He is a co-author of the Stargate Omnipedia and co-hosted the GateWorld Podcast, which ran weekly for five years.

GateWorld’s own podcast is still running on an occasional basis, and in light of David’s new gig we might experiment with a format change in the weeks ahead.

While I’m clearly biased toward David, he really is the perfect Stargate fan to host the show. In addition to his years of work here and his (literally) encyclopedic knowledge of the franchise, David has also worked as a consultant on the MMO-RPG Stargate Worlds; a writer for the official Stargate magazine; and a curator of the Stargate prop auctions for Propworx.

He has a background in radio and today he’s the man behind Stargate’s official social media accounts.

This is a podcast made by fans, for fans of the long-running franchise, and I think it signals MGM’s commitment not only to the television shows but also to the community that has grown up around them.

Appearing in Episode #1 of the new podcast is our friend Jenny Stiven, long-time Stargate fan and marketing genius who also runs Stargate’s official social media channels, as well as yours truly — GateWorld’s founder and managing editor. In this hour we talk about the early years of SG-1, the founding of this site, and some hints of what’s to come.

Subscribe to The Official Stargate Podcast on iTunes or wherever you get your podcasts! we’ll be listening and posting updates here as the show moves forward.

On Thursday MGM will host a Comic-Con panel with another (and much bigger) announcement for Stargate fans (6 p.m. Pacific time)! Stick with GateWorld for all the news as it breaks.

Sadly impossible to subscribe to this show. Not in iTunes, no atom feed, no rss feed. Only way to listen is poor integrated player on the website.

It doesn’t show up on iTunes and the rss feed won’t add to my podcast app on Android. I’m using Podcast Republic. Any suggestions from anyone would be great. Thanks.

I’m not sure if your podcast app will like the formatting, but here is an RSS feed I found: http://officialstargatepodcast.libsyn.com/rss

I’m told that the show may take a day or two to wind its way through iTunes and show up in the directory.

When is the next episode supposed to come out? I was excited about it and the big news. The big news was a huge let down too so I was hoping for more of this podcast.

It appears there is no way to har this podcast. All links are dead. Any help available?

Sorry, Erik — I can’t find it. When I search “podcast” on Stargate Command, all I see at present is episodes #6 and #7.