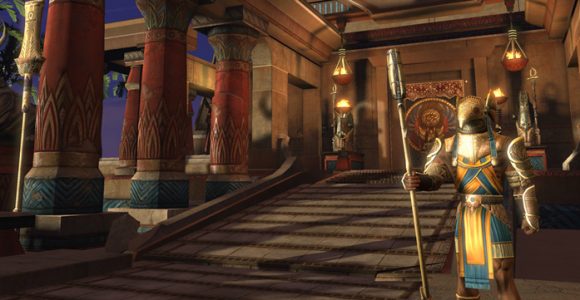 Stargate Worlds was to be a massively multi-player online role-playing game, giving players the chance to freely explore the far corners of the Stargate universe.

Step through the Stargate as an SG team of soldiers and scientists, and travel instantly to fantastic worlds in this galaxy and beyond. Players can forge alliances, establish trade, investigate ancient mysteries, and defend Earth from such hostile forces as the Goa'uld and the Ori in an immense multiplayer universe.

Stargate Worlds provides players with a form of ranged combat unique to MMORPG that will take full advantage of modern and science fiction weaponry, cover, and terrain. Players will be able to form squads with their friends or use bots for players who want to go solo. Squad leaders will control maneuvers and objectives through an innovative combat control interface. Players may choose to create characters that are members of either the S.G.C. (the Good Guys) or the System Lords (the Bad Guys). Characters are equipped with varied and mixed skills, with the choice to form such classes as Research, Combat Marine, Medical, Scientific, Diplomatic, Engineering, Archeological, and Exploration. PVP will be possible between the two alliances on many contested worlds, actually swaying the balance of power on those planets, and unlocking hidden content. Cooperative play will also be possible, and players will be encouraged to forge temporary alliances to deal with greater threats, such as the Ori.

The universe evolves as players inhabit and vie for control over alien worlds. Local populations will shift their allegiance between the two alliances. Outside threats, such as the Ori, will conspire to further change the face of these worlds. Players will be able to tip the balance of power on these worlds, beating back the Ori invasion, and swaying the local populations to their side through quests, combat and trade. Whether you are a solitary explorer, master tradesman, or commander of a massive armed force -- your every action will alter the worlds of the Stargate universe.