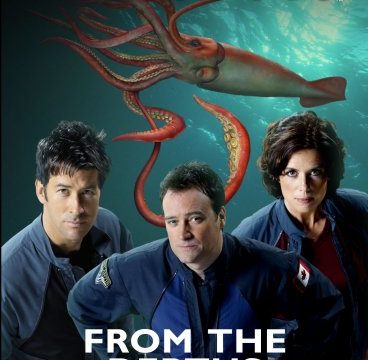 The Atlantis team find themselves between an intelligent alien life form and the Genii in Stargate Atlantis: From the Depths — coming to your Kindle next week!

The book will be published February 7 on Kindle ebook format, with a $4.99 pricetag. Fans can pre-order it today from Amazon.com and Amazon.co.uk.

When the aquatic life on Atlantis’s adopted homeworld begins to threaten the city, Colonel Sheppard’s team discovers that the creatures are both intelligent and able to communicate.

Another victim of the Ancient scientist, Janus, the squid-like creatures reveal how they were abducted from their own world millennia ago — and demand Atlantis’s help to return home. Eager to assist, Sheppard and his team travel to the creature’s homeworld only to find its indigenous population hostile to the return of their kinsmen. And, to make matters worse, they discover a Genii salvage operation in the ocean that’s not only threatening the creature’s habitat but their very survival.

Facing hostility above and below the water, Weir and Sheppard must negotiate a homecoming for their new friends and peace with the Genii before frayed tempers result in a bloody conflict that could destroy them all …

As a shorter-form novella, From the Depths comes in at 104 pages in length.

Head over to Amazon to pick up Fandemonium’s latest, and find the publisher online at StargateNovels.com.

GateWorld has the full catalog of SG-1 and Atlantis novels in our Books section!