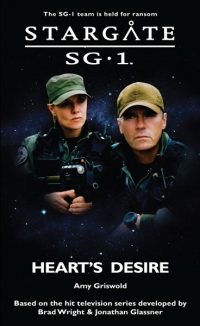 SG-1 battles pirates in the skies over a mountainous world as they search for the legendary "Heart's Desire."

All that glitters ... Colonel Jack O'Neill wants a relaxing mission for SG-1 as they recover from Sha're's death at the hands of Teal'c and the horrors of Sokar's prison world of Ne'tu. The trade negotiations on Saday look like just the ticket -- until the pirates show up. Captured by rival bands of treasure hunters in search of the mythical Heart's Desire, the team must fight to stay alive and to find each other among the vast mountains and ravines of a world where pirates captain airships and down is a very long way indeed. But SG-1 have deeper battles to fight. In the wake of his wife's death, Daniel Jackson strives to rebuild his friendship with Teal'c while Major Carter struggles to accept the legacy of Jolinar's memories ... From Fandemonium

Forever in a Day Jolinar's Memories The Devil You Know