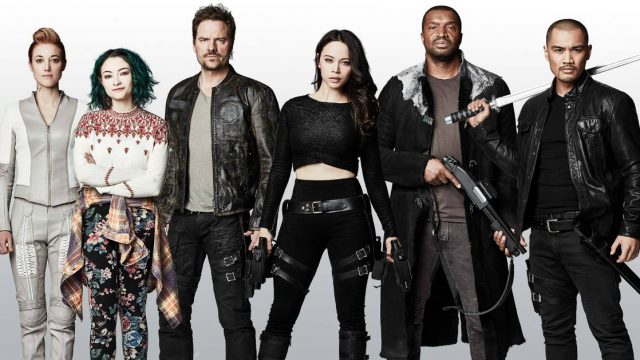 Reader-contributed editorials represent the opinion of the author and not necessarily that of GateWorld.

Wander through any sci-fi fan forum and you’ll stumble across an assortment of posts lamenting shows taken before their time. In fact, you’d be hard-pressed to find a single soul in the greater fandom community who hasn’t been burned by a cancellation.

I myself have been burned plenty of times (Firefly, Stargate Universe, Flash Forward, Defying Gravity — the list goes on). And I’ve become a bit jaded. To be honest, the minute I see live ratings plummet I cut emotional ties with a show and distance myself from the fan community until the show’s fate has been determined. With the exception of Stargate, I refuse to get too close to any series.

Being both a fan and a realist is hard. I recognize that cable channels and TV networks are complex infrastructures that have to turn a profit and report to a greater corporate authority. They’re not charities — they are for-profit businesses. Most recently I’ve mourned the loss of Dark Matter, which isn’t the first show to prematurely get the ax (and which certainly won’t be the last). But it has been an eerily familiar experience, one that reminded me of what happened with Stargate Universe almost seven years ago. (That was a situation that got so intense it received an open letter from Syfy here on GateWorld.)

Dark Matter creator Joseph Mallozzi has recounted the events leading up to Dark Matter‘s cancellation on his blog. When he discovered that Dark Matter was on the bubble he offered to organize a creative conference with Syfy where he would present the material planned for subsequent seasons. He had a distinct five-year vision, and at the very least, wanted to know if he should wrap it up early. Unfortunately he was told there was no point in wasting time briefing the network, as the decision for renewal would not be based on creative factors. 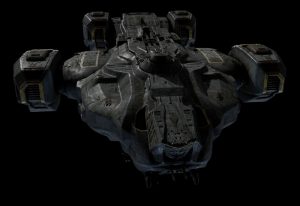 The Raza will stop flying after Syfy cancelled Dark Matter in 2017.

Acknowledging dwindling broadcast ratings, Mallozzi figured a six-episode miniseries could suffice and wrap up the Raza‘s journey on the Syfy Channel, creating a complete story. He might not get the final two seasons he intended, but fans would have closure.

Sadly, the miniseries option was not up for consideration, either. Next Mallozzi continued rallying the show’s vocal social media presence to demonstrate the strength of the Dark Matter fan base. Again, Syfy responded that their decision would be contingent on ratings, and no amount of ruckus or lobbying would sway their perception of the numbers. Mallozzi and company continued to “make some noise” in support of the show through the summer of 2017, but within a few weeks Dark Matter was cancelled.

Despite the show’s respectable popularity overseas, impressive streaming statistics, and most notably its doubled numbers through delayed viewing … Syfy was done. A complex infrastructure of financing and distribution came tumbling down as the show’s existence was largely reliant upon its “domestic” network (Syfy), which foots a significant percentage of the budget in the form of a licensing fee.

But this is just business, right? We the consumer need to shut up and be grateful for what we get … right?

As television gravitates toward long-form storytelling, an episode (or in many cases even a season) of a TV show is no longer a complete product. It’s a piece of the puzzle. We are now in the business of telling stories with a distinct beginning, middle, and end … as represented by Breaking Bad, Game of Thrones, House of Cards and many, many more. 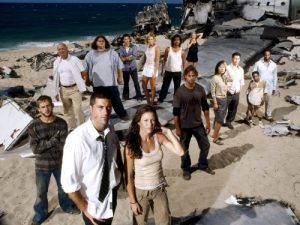 Just ten years ago the vast majority of television shows were episodic: plots were largely contained to a given episode, with the “reset” button hit at the end of every week. Viewers could weave in and out of TV shows at their leisure. If you missed a season — who cares. The only thing that “carried” over to future episodes was the characters. You could jump back in whenever you pleased, and catch missed episodes in reruns.

For decades, that was the network television model. Even early cable TV hits, like USA’s Monk, were largely episodic. But at the turn of the 2000s shows like ABC’s LOST demonstrated an insatiable demand for serialized shows that function as ongoing stories (with an entrenched mythology) that build toward a distinct finale. It didn’t take long for content creators to jump on board with that model, as it allowed for greater creative freedom and exploration of the characters and core conflict.

This is what Syfy might be missing: television is no longer a buffet of content to sample casually. The “big four” (ABC, NBC, CBS, and FOX) still utilize this model, but even they are infusing elements of long-form storytelling into new programming. If a network terminates an arc-driven show before it has a chance to tell the complete story, it is essentially “selling” the viewer a partial experience.

How would you feel if a theater ushered you out of your seat with 30 minutes of the movie still left? Would you come back?

Today the long arcs, dynamic conflict, revelations, and ultimate closure keep viewers invested. It’s why we give serialized shows a chance. We want to live vicariously through the characters and experience their world on a continual basis, building beat by beat and twist by twist to the final climax. 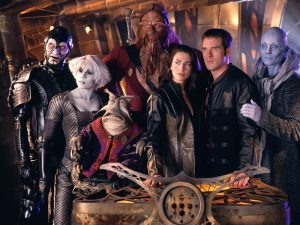 Syfy once helped pioneer arc-based storytelling in science fiction with shows like Farscape (1999-2003).

Television now offers feature-quality content that can live for years on end. So when a network offers to air these kinds of stories, they are investing in a greater endeavor — not something that can be cut short. An upfront, five-season commitment is unheard of in television — and frankly, unrealistic to expect — but coordinating with producers to ensure narrative completion (regardless of the circumstance) is not.

To be clear: Syfy is not acting maliciously, but they are rather dated in their methodology. Once the ultimate destination for top notch, innovative science fiction like Farscape, Stargate SG-1, Stargate Atlantis, Battlestar Galactica, Stargate Universe, and even lighter fare such as Warehouse 13 and Eureka … Syfy is now known around the world for the Sharknado franchise.

And it’s not without good reason.

Syfy’s fall from grace is truly ironic (and dare I say, tragic), as they were once the vanguard of serialized storytelling. Before Breaking Bad, Mad Men, and The Walking Dead — the shows that revolutionized cable TV — then the “SCI FI Channel” was providing quality programming like Battlestar Galactica and Farscape, two highly influential series that helped pave the way for this new era of serialized television.

A few years later SCI FI traded in their hard-earned status as a quality content provider for reality television, game shows, wrestling, Saturday night monster movies, and a rebranding from SCI FI to “Syfy.” The new model was meant to appeal to a “wider audience,” which is code for the lowest common denominator.

Once that new model began to fail — and after other cable channels (like AMC) became host to high-caliber narrative entertainment — Syfy recommitted itself to original science fiction material.

Unfortunately it has been a bumpy ride, and the Dark Matter situation isn’t helping their case in the quest to return to the channel’s smart, science fiction roots. 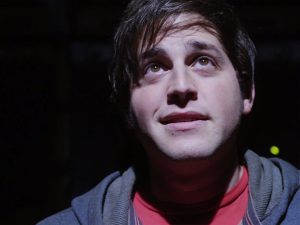 So, I’m going to suggest something pretty simple: respect your audience and commit to telling any entire story. Focus on completion, not the flavor of the day. Understand that your reputation is just as valuable as ratings (perhaps more so), because it is your reputation that will determine long-term sustainability. Stop burning fans with incomplete stories and hoping that the marketing push for the next New Thing will still lure them back for more.

If a serialized show is on the bubble, give it one final (perhaps partial) season to finish the overarching story. If not, give it a three- to six-hour mini-series. And if you still can’t swing that, order a two-hour TV movie. Don’t wait until you reach the point of no return, when the plug is yanked out with no ceremony.

If Syfy wants to reclaim their place in the genre we love so much, they need to embrace this new era of storytelling. Should the network fail to reinvent their programming strategy — and more specifically, fail to mend bridges with ostracized fans — they will continue to hemorrhage viewers and lose what little remains of their once formidable reputation.

All it takes to turn the ship is a bigger commitment — to the story, to the cast and crew, and to the viewers who want to love your work.

Reader-contributed editorials represent the opinion of the author and not necessarily that of GateWorld.

John Harrison is a guest contributor at GateWorld, and a long-time fan of Stargate and science fiction.

Maybe Mallozzi should approach other networks to get Dark Matter back on. Sounds like he has a good 5-year plan.

BABYLON 5 started serialized stories in 1994 (almost a decade before Lost). I am amazed the blogger did not know this

Great review of the situaion! Thanks!

But lets face it: every week a new show is ready to start. networks havea queque of shows waiting to start, so they can choose from what shows to start, end and continue. Not saying that 10years ago were to few, but they were enought.

Microsiv, Mallozzi did go to other networks and Netflix and if I remember correctly he also went to Amazon. Lets put it this way, he tried everything he possibly could. He thought he might have a deal here or there but they fell through.

It’s interesting to read one of these editorials when it’s about a show you don’t care about. I watched Dark Matter occasionally. I didn’t see every single episode, but I saw enough that when it was canceled, I shrugged. The show was okay, but I wasn’t addicted to it. I do respect Mr. Mallozzi and I don’t want this to come off as a criticism of his work. But, the whole “five year vision” thing is impractical. Unless they are writing top-rated shows like Walking Dead, smart showrunners devise season finales that can be satisfactory series finales after they have… Read more »

Very well said! I’m to the point I don’t want to start watching a new show until it’s survived at least 2 or 3 seasons.

I used to be a big fan of Sci-Fi Friday, back in the day. However, I cringe at what that network has become (Syfy). Despite the attempt to get back to its roots, Syfy has a looong way to go. I was disappointed that Dark Matter was cancelled. At least Killjoys got a chance to continue, and I like The Expanse. However, outside of those two shows, I barely even pay attention to that network, or most networks. I much prefer the Netflix model. I like being able to watch episodes at my own pace, without waiting a week (or… Read more »

Well said, it was also good to hear that someone else felt jilted by the Flash Forward nonsense.

100 % Agree Have stopped watching shows like Krypton and The Magicians . After Dark Matter, the feeling isn’t the same anymore. Dont want to get interested in something gone in 1-3 seasons.

SERIAL STORY TELLING started in 1994 with Babylon 5 (almost a decade before Lost). I am amazed you did not know this