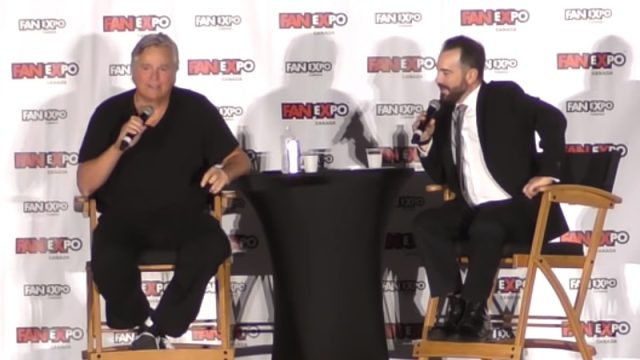 The time may be right for General Jack O’Neill to take another trip through the ol’ orifice. At least Richard Dean Anderson is game for it.

Anderson told fans that if a good script for Stargate came his way, he would do it.

The actor appeared at the Fan Expo convention in Toronto, Canada over two days at the end of August. Now the full video of his stage panel (with host Aaron Sagers) has been posted online.

“Yes, immediately I would do that,” he said in response to an audience question. “I was thinking of dropping Brad Wright a note just to see how he was doing, and touch bases with him [and] see what his status is in all this. … He’s a brilliant writer. I really respect him a lot. Robert, as well — Robert Cooper. But Brad was my go-to guy there.” 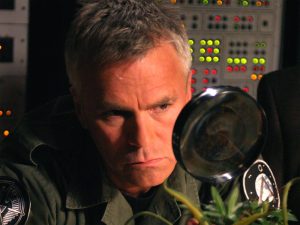 Anderson said he would like “just to reestablish some kind of contact with him and see what’s going on with all that. I’m tired of hearing rumors. I want to hear some straight shooting about that! But yeah, I would do it in a second.”

The actor exited Stargate SG-1 in 2004 after eight seasons as a regular cast member, in order to spend more time with his young daughter. Now he is putting her through college.

And while the 68-year-old actor might not be up for the rigors of a long season of television production, today’s landscape of shorter seasons might fit well.

“As far as punching the clock and going to work I wouldn’t mind doing a mini-series of some kind,” he said — “something that had a clear beginning and end. … I would do something along those lines.”

Although series television is rigorous work, Anderson added that that also comes with important benefits. “[In] all the series work that I’ve done I’ve enjoyed the process,” he said. “And I’ve enjoyed what’s happened over a period of time, which is you become familial.” On Stargate he found himself “surrounded by a great group of people. We all got to like each other and play off each other, and it became a real joy. I wasn’t sad to leave, only because I was leaving for an excellent reason.” 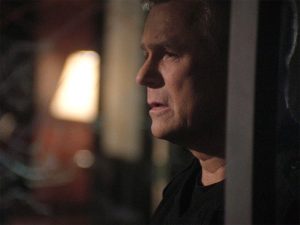 Anderson’s final appearance on Stargate to date was the SGU episode “Incursion, Part 1,” where Jack runs the strategic headquarters of Homeworld Command.

Stargate SG-1 co-creator Brad Wright actually had just such a script in the works — a Jack O’Neill story that could have had profound ramifications for Stargate’s fictional universe. That was to be the DVD movie Stargate: Revolution, which was shelved by MGM prior to the studio’s 2010 bankruptcy.

Today the actor thinks it would take a little work for him to get back into fighting shape. His last on-screen credit (according to IMDb) was for Don’t Trust the B—- in Apartment 23, in 2013.

“It takes so much work to get there — and I’m so lazy,” the actor joked. “… I’d want to lose about 25 pounds before I considered it again. I want to look like Cary Elwes!”

MGM: Let’s have your people call his people.

For more from RDA on MacGyver, childhood, and kissing Amanda Tapping, watch the full panel from Fan Expo Canada! Then drop a comment below and tell us if you think Stargate needs Jack O’Neill to make its big comeback. The Q&A about a possible return to the screen starts at the 27:30 mark.

UPDATE: GateWorld’s Adam Barnard has assembled a video essay considering Anderson’s remarks, and what the future might hold for new Stargate productions. Check it out:

It was a great panel. I love how committed they are all. This and Gatecon proved that Stargate is still alive. It’s a shame that MGM is such a lame company.

I loved Stargate from start to finish. A new series, if all some or all of the original cast were part of it, would be spectacular. PLEASE DO IT!

ABSOLUTELY WE LOVE STARGATE!
WE WANT A COMEBACK !!!

There is no one like Jack O’Neill. Love all cast members from all 3 series’ as well as the movies. I even named our dog O’Neill! Please come back. And thank you for letting our friends to the north that the clown in the White House is a complete idiot.

When I met RDA a few years ago, I talked to him about how he left the show end of season 8. He was fully committed to raising his daughter. He is a top bloke!

Seasons 9 and 10 Should have been called something else because they are completely outside the first 8.

Nothing stays the same, PARTICULARLY in the military. People come and people go. The beat goes on.

Make a SG-2/SG-A team that its sole purpose is to find SG-U Team and bring back home. After a few seasons or even starting season 2, bring back SG-U and let us know where the heck is Destiny going and what happens with the whole story.

I’d watch. There’s a peculiar morality to his role, that resonated with me.

OMG PLEASE Richard Dean Anderson!! 🙏🏻💖🙏🏻💖🙏🏻
You need to come back to an awesome Stargate show!! You were such a fantastic presence on SG-1, you made me laugh & sometimes tear up!!
I would watch YOU again in a heartbeat & would love for my daughter to be able to experience your wit & humor!! ❤️ You!!

RDA is AWESOME-love him, love him!!!!!!!!! Would love to meet him. My daughter is developmentally challenged and she loves him!

That will be great to see Jack O’Neill again!!! He was the start of Stargate SG-1 and he will always be!!!!! Otherwise is like pancakes without the syrup!!! or spaghetti without the sauce!!! Bad bad bad…Right!….. Jack O’Neill is the condiment to Startgate SG1.

SG 1 was not the same without Jack O’Neill .stargate needs to come back with with Jack.

The original is always the best! Yes, bring it back.

It was the best syfy show there was, like a family taking on the bad guys, just wish O’Neall would of hooked with mayor carter. Great group of actors, all gossip was good gossip. Rate it 10stars

Learning that RDA left Stargate to spend more time with his daughter just only makes me respect him more. Great dude!