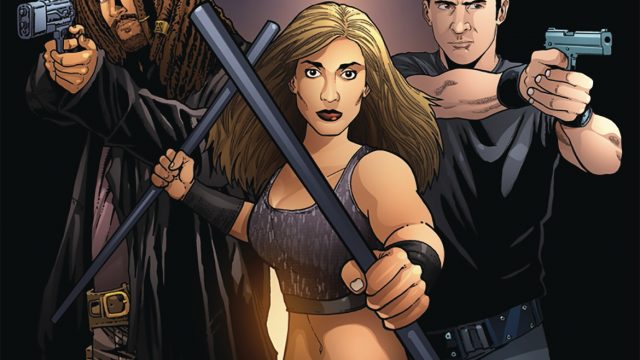 Janus and his alien horde stand on the edge of victory in the final issue of the ongoing Stargate Atlantis comic series. “Singularity” Issue #3 is available today from American Mythology!

The new issue is available in three covers: the Main Cover with art by by Clint Hilinksi, a Photo Cover featuring Jason Momoa’s Ronon Dex, and a limited edition Flashback Photo Cover with Joe Flanigan as Colonel John Sheppard. (See the gallery.) The issue was illustrated by Gordon Purcell.

The Main Cover and digital editions sell for $3.99.

The Atlantis comics debuted in May 2016 with the first issue of “Back to Pegasus,” picking up where the television show left off and returning the city of Atlantis back to the Pegasus Galaxy. In the 12-issue run the Atlantis team has struggled against the Ancient scientist Janus — first introduced as a benign figure in the first season episode “Before I Sleep.” In the comics, the evil genius is the lead antagonist. 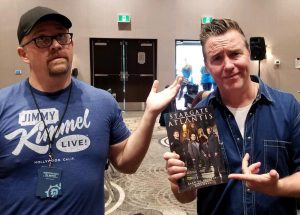 Writer Mark Haynes and an exasperated Paul McGillion, who notices that Beckett isn’t on the cover, at Gatecon 2018. | Photo: Mark Haynes

The first six issues have also been collected in a 144-page Stargate Atlantis trade paperback. This includes the first half of the story: the 3-issue “Back to Pegasus,” and the 3-issue “Gateways” series.

Writers Mark L. Haynes and J.C. Vaughn have stated their desire to tell more stories set in the Stargate universe, though to date publisher American Mythology has not announced plans for further issues.

Miss an issue? The latest issue of the Previews Catalog also lists all 12 individual issues of the Atlantis series, including cover variations, as available in November. This would appear to indicate back stock will be available for comic shops to order at the original cover price. (Copies of “Back to Pegasus” #1 have been running upwards of $25 on the secondary market.)

American Mythology’s Stargate Universe comic also recently completed its own, 6-issue run. The “Back to Destiny” series was also penned by Haynes and Vaughn. 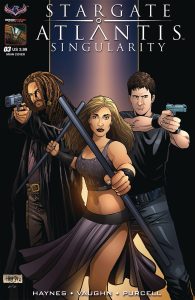 American Mythology has also announced an ongoing Atlantis / SGU Anthology series — each with two short stories. Two issues were solicited to retailers earlier this year, though fans are still awaiting their publication. Meanwhile a third issue of the Anthology comic has been announced, with stories featuring Eli Wallace and gate technicians Walter Harriman and Chuck.

Look for “Singularity” #3 and the rest of the series now at Amazon and comiXology, and at your local comic book store! If your shop doesn’t carry the Stargate comics, ask them to order it for you.

GateWorld’s complete guide to the Atlantis comics can be found in our Comics section!