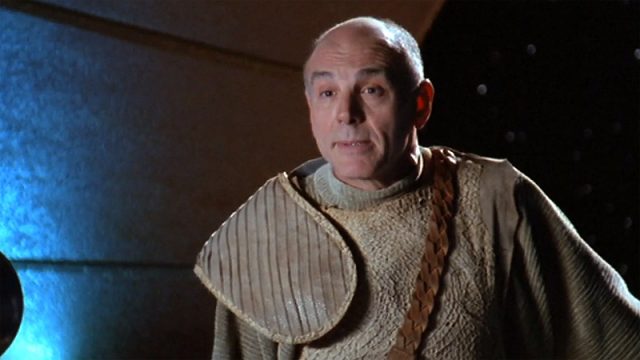 The memorial service for actor and friend Carmen Argenziano has been set, and fans and friends all over the world can participate by means of an online live stream.

Carmen’s family has set the service for Saturday, March 2 at 4:30 p.m. Pacific time in Burbank, California. It will be held at the American Lutheran Church of Burbank.

The event mourning Carmen’s passing and celebrating his life will be streamed on the church’s Facebook page.

Carmen passed away February 9 at the age of 75.

For seven seasons on Stargate SG-1 he played the beloved character of Jacob Carter, Sam’s father and Earth’s liaison to the Tok’ra. He appeared in more than two dozen episodes.

At the end of his career Carmen had more than 200 television and film acting credits to his name.

Read more about Carmen’s remarkable life, and the outpouring of love and mourning from Stargate’s cast and crew. My own remembrance is at the start of the video embedded below, which leads into my 2007 interview with Carmen.

Do you have a personal memory of Carmen you would like to share? We invite you to post it below, or over on this thread at GateWorld Forum!

I never got to meet Carmen in person, but I really loved his characterization of Jacob Carter. He brought such a wonderful quality to the episodes, and was a great foil for Jack O’Neill. LOL Wish I could have met him in person. I heard so many nice things about him. So sorry he died. He will be remembered by all his friends, fans and family for years to come. RIP Carmen!

while he seemed like a reasonable person, there was that undercurrent, like something important was about to happen to him. ..I’ll miss that.

I had to miss the service and I was very upset, but I’m very glad to see that it is available in the videos on the church’s Facebook. I hope everyone else who missed it will go and find it there.

Just finished viewing the memorial service that was posted on Facebook from the Lutheran Church in CA. Glad they made it available for those who missed it. I had missed it when it first began, so Thanks for the Lutheran Church for keeping it posted.:-) Beautiful service! I was however surprised that no one from Stargate was at the service. Didn’t see RDA, Amanda, Michael, or Chris there. Maybe they sent their condolences by email. Who knows. But I hope they sent the family members some kind of condolences. Carmen was such an integral part of Stargate, being Sam’s father.… Read more »