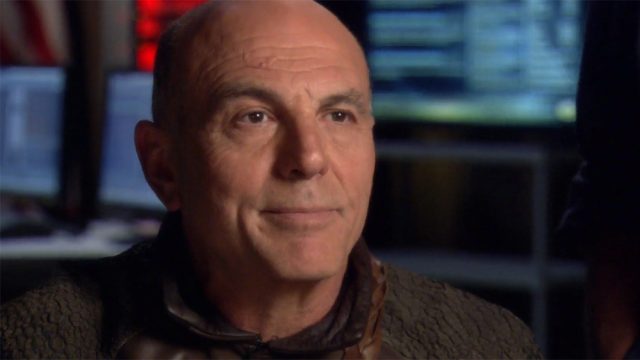 The Stargate family mourns today at the passing of actor Carmen Argenziano. The veteran stage and screen actor died Saturday at the age of 75.

Born to an Italian family in Sharpsville, Pennsylvania, in 1943, Carmen left home at the age of 18 to study acting at the American Academy of Dramatic Arts in New York. In a 1996 interview with the L.A. Times he said that he was “kind of a shy, introverted young man” who wanted “to become forceful, to be something other than what I was, which seemed pretty well-contained and not terribly exciting to me.”

He found work selling concessions at Broadway shows before moving to Hollywood in 1966, where he took up residence at the famous Actors Studio (where he would become a lifetime member). There he mopped the floors to earn his keep, and participated in as many acting workshops as he could. 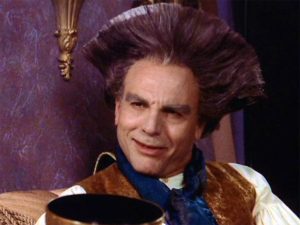 Before he was Jacob Carter, Carmen Argenziano played Urza Jaddo on Babylon 5.

His acting career spanned nearly 50 years, beginning in earnest in the late 1960s and early 1970s. He landed a high-profile gig as a henchman to Michael Corleone (Al Pacino) in The Godfather, Part II. His work on the big screen also included The Accused and Stand and Deliver.

Carmen’s early television work included Kojak, Columbo, and The Rockford Files. In the 1980s and 90s his credits include the classics of the era — from The A-Team, Cheers, and L.A. Law to Melrose Place and 21 Jump Street.

Before he was cast as General Jacob Carter on Stargate SG-1 in 1998, science fiction fans already knew him as the Centauri Urza Jaddo, old friend to Londo Mollari, in the Babylon 5 episode “Knives.”

In a 2006 interview with GateWorld, Carmen described his career as that of a “journeyman” actor. “I remember an old acting teacher that told me, ‘Drama is revelation,'” he said. “The more you work on a role or character the more you discover about him. And in some cases there is self-discovery, too.”

In the end he had well over 200 acting credits to his name. He won an L.A. Drama Critics award for his role as a troubled police detective in the stage play “A Prayer For My Daughter.” And in 2016 he made his directorial debut on the stage. 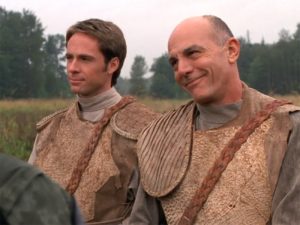 News of his passing was first announced by close friends on social media, and has been confirmed by one of his agents.

Carmen was among Stargate SG-1‘s best-known (and most loved) recurring guest stars, with some 25 appearances under his belt. He made his debut as Sam’s dad Jacob Carter in the second season episode “Secrets,” and in subsequent episodes the character was blended with the Tok’ra symbiote Selmak. The experience saved Jacob’s life from terminal cancer, and made him an important liaison between Earth and its new allies.

The show’s writers did in fact consider killing off the character in Season Two, but changed directions to make him a Tok’ra — and one of the show’s longest-running recurring roles.

Jacob’s story came to an end in Season Eight, when the character died a hero’s death in the episode “Threads.”

“I was a recurring role [on Stargate] and it went on for about six years,” Carmen told GateWorld. “And it was a wonderful, wonderful experience working with Amanda and the rest of the cast and going up to Vancouver. And I enjoyed it, but all things come to an end.”

“This series has been wonderful for me,” he said. “More people recognize me as Jacob Carter than any other character I’ve played. I have a wonderful affinity for old Jacob.” 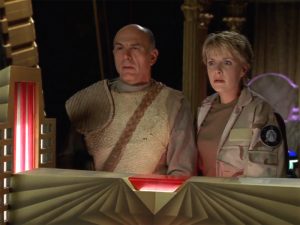 Jacob played a key role in many of SG-1’s adventures. From “Enemies”

He said his favorite episode he did was “The Tok’ra, Part 2” — in which Jacob receives the symbiote that would transform his life. Second to that was “Threads.”

As he played Samantha Carter’s father on the show, off screen he was also a father figure to actress Amanda Tapping and other members of the cast.

“Amanda is so supportive and so warm. She’s such a positive influence on the set,” Carmen told GateWorld in 2007. “She knows everyone’s name. Always up. Always supportive. Always helping. Always contributing.

“And I remember when I was struggling a little bit with some lines of some dialogue in the first episode. She just held my hand and made a connection. And I’ve loved her ever since, actually.”

Carmen Argenziano has a number of still unreleased projects, according to his IMDb page. Among them is the indie film Preacher Six, in which he plays Father Gabriel. The movie filmed late last year. 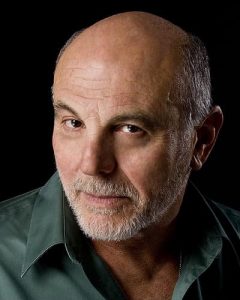 GateWorld had the joy of interviewing Carmen face-to-face on two occasions: once in 2006 (“The Journeyman”) and again in 2007 (“Father Figure,” available in audio). Carmen was warm and personable, down to Earth, and even in the midst of the bustle of a fan convention he was always ready to stop and give fans a good memory — a picture, an autograph, or just a moment of his time.

Stargate has “brought me a recognition that I’ve never had before with the wonderful fan base and the conventions, and meeting people whose lives have been so wonderfully, positively influenced by the show,” he said. “By what we do. By what we bring to them and their lives. That’s the whole reason we become actors, or at least I did, is to influence people’s lives in a positive way. To give them hope. To let them identify with what’s possible, who they are, what they may become.”

Our condolences go out to Carmen’s family and loved ones. And we celebrate his life, his work, and his remarkable contribution to our lives.

Do you have a personal memory of Carmen you would like to share? We invite you to post below, or over on this thread at GateWorld Forum!

This is very sad to read. RIP Carmen Argenziano. He added something special to SG1 that I’ll always remember and continue to enjoy.

He will be missed such a sad day for the show stargate sg1 to have lost a member of the family and cast Rest in peace Mr. Carmen Argenziano

Very sad. I’m on s7 in my marathon SG-1 viewing, and really enjoy his character.

I can’t believe it! He will be missed.

He Was Born In Sharon Pa Not Sharpsville

Thanks, Jaime — there’s some discrepancy as to Carmen’s place of birth from various online sources. I went with Sharpsville because it appears in the L.A. Times piece in the context of an interview directly with Carmen about his youth. (If there is a better source, I’ll happily update the piece.)

Loved Jacob Cater. Loved him on the show he will be missed. Prayers to his family and friends. God Bless AMEN!!!!

Dang, have just been doing yet another Stargate SG-1 marathon lately, introducing a friend to the show. This is gonna make the episode with the death of his character an even bigger punch in the gut when we get there.

I remember him from the godfather

A class act all the way. An actor that added just the right seasoning to help stargate SG1 become in my opinion one of the greatest sci fi adventures in television history, he will be missedby his many fans im sure.

Very sad. He seemed so sincere in interviews, and though we know his character as Jacob well, he was a man with a life and a family most of us will never know, but we will honor his memory and never forget him.

Darren – IMDB lists both Sharpsville and Sharon, PA as his birthplace. So I wouldn’t feel too bad about not being able to nail down the correct site! But he was my favorite recurring role on SG1. I hated it when they killed him off. Especially since in “The Tok’Ra Pt.2” Selmak tells him, prior to the blending, that “we may be together for a very long time.”
https://www.imdb.com/name/nm0034492/?ref_=nv_sr_1

I was in fourth year medical school when they decided to scratch the world.

I just feel that… his symbiote will turn out to have saved him.

his symbiote Selmak was already very old when Jacob blended with him, I think by the time they both died in “Threads”, Selmak was already close to 2000 years old (at least that’s what I read), so it’s understandable that the symbiote was dying of old age, nothing can live forever.

and Yu, who lived alot longer but only because of the sarcophagus, was suffering from dementia/alzheimers, became much more human tolerant at the end.

Linda is right. Nothing lives forever except a truly exceptional few characters and people who have a significant impact on peoples lives.

Carmen is from Sharpsville PA but the hospital he was born in was located in Sharon which is 2 minutes away because Sharpsville doesn’t have a hospital. Carmen was best friends with my uncle from high school until my uncle died in October out in California where he lived. Carmen even visited us at my parents with my uncle a few years back. Carmen is a great guy and lived only a few houses down from my parents growing up. Hope this helps you out with where Carmen was born and where he grew up.

Thank you for the clarification on that, @Hometown! Glad you stopped by and posted about your family experience with Carmen.

RIP Carmen. Stargate was blessed to have you be part of the team. I loved watching you play the part of Amanda Taping’s father and later as the host of the Tok’ra Selmac. I always looked forward ti the episodes you were a part of. From a long time Stargate fan, you will be missed.

this is really sad, Jacob/Selmak is 1 of my fav characters in SG-1, RIP.

I just found out about Carmen’s death. This is so very, very sad.