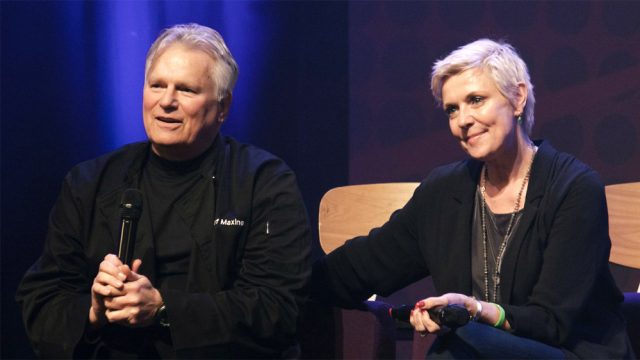 The duo appeared in front of a packed house of hundreds of Stargate fans at Wales Comic Con on April 27. They also signed autographs and posed for photo ops with fans.

After a quick catch-up with what both of them have been doing lately, the panel session turned to audience Q&A. Some highlights are below — but the real question on everyone’s mind came near the end of the panel: Is there any chance that we will ever see SG-1 on TV again? 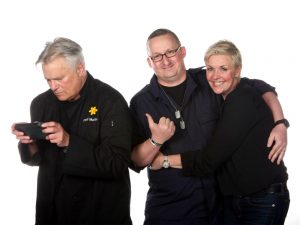 “My initial statement will be: ‘God, I hope so!'” Anderson said. “Because there are elements of working with that group that is just so dynamic, and so wonderful and comfortable and creative. We had a freedom with each other that I haven’t seen or experienced in other venues.

“It’s not really up to us. I don’t know how the other actors are feeling about it. But I don’t sense that Brad has got anything cooking. I’d suggest write letters …”

Wright has stated as recently as January that he and MGM are in early development on some sort of Stargate project. But the studio has remained mum, and whether or not it will make it to screen (or involve any of the SG-1 cast) remains to be seen.

“I know that there is interest from MGM, for sure, to try to revitalize the franchise in some way,” Tapping chimed in. “And I know, having talked to Brad, that they’ve approached him about it. It’s not black and white, for sure. I think it would be great to revisit it, even if it was a series of movies, like ‘Movie of the Week’ type movies, or a limited-run mini-series. I don’t think that’s out of the question.”

“I think it’s more possible now than it was, say five years ago,” she added. “I think the idea of it has been germinating for a long time now and MGM has actually seemed to have latched on to that idea. And because there are so many shows that are being rebooted, it’s more possible now than it ever was. So never say never. I think it would be quite fun to revisit it for a period of time.”

Anderson also joked about the dynamic on the show’s set, including his comedic sensibility … and inability to remember longer bits of dialogue. 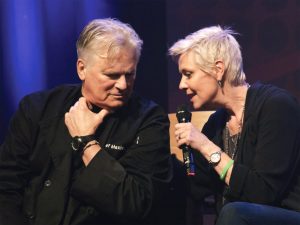 Amanda explains to Rick what a fandom “ship” is. Credit: AndryPresh / Twitter

“They had sense enough to give Michael [Shanks] and Amanda all the dialogue,” he said — “or the main stay, anyway. And I was relegated to the reactionary, ‘What?‘ Which kind of helped the dynamic along, but there was no way we could do it any other way! I couldn’t memorize that dialogue to save my life. And she could.”

He then turned to Amanda and pronounced, “Thank God you were on that show!”

Watch the full, 40-minute panel video below, courtesy of YouTube user “All Things Nerdy.” We’ll have much more to come from Wales Comic Con in the days ahead, including photos and a complete convention report from Stargate fans on the ground in Wales.

Leave it be. Die hard fans should move on.

Apparently you misunderstand the term “die-hard”. ;)

we will never move on buddy

When did Paul Simonson become the arbiter of what fans should or shouldn’t do? It’s people like this guy who give fandom a bad name.

I thought the Die Hard movies were pretty good, but what do they have to do with SG?

Nice how the full video on YouTube is my upload! Would have been nice to have been informed though

Rho
Reply to  Will

Hopefully they come back.

This is great news! I would love to see the original cast back together as SG1 again. The original cast has so much talent, and chemistry together. The key to this come back is a good script that will blow the socks of the fans! Lots of action in the first episode!

I’m a huge fan of sg1. Second season was the best i think, but i like the entire saga. But dude, don’t blind yourself. You don’t want to see the original cast back together on sg1 for new show, you want new show with your good memories from this cast, the cast from the past. It’s impossible, time has passed. I like to see reunion, or a special episode with them. But not an entire show, because, they can’t be the center of a new show based on their original character, because that could ruin everything.

@Mang4 I do want to see the original cast in a SG1 in a new TV series, or movie. I have seen other Star Gate TV shows, and none of them came close to the power projected by the original SG1 cast. The reason SG1 was a big hit compared to all that followed was the fabulous cast with Richard D Anderson in it. Remember there were 214 episodes, so that proves how good the original cast are. You don’t throw away actors because their getting a little older, you embrace their gifted talents, and give thanks to them for… Read more »

I would love for them to do what they did with Farscape; A 2hr close out movie on SyFy or a miniseries that goes over 2 or 3 nights. Have a real finale, they can guess star with a new group taking over the mantle. I wouldn’t even mind if they threw characters from Atlantis in there; Universe they can keep that it was a huge failure

Great video, but the translation of youtube is bad very bad! Not easy to understand when not speaking English

Will they come on stage with walkers or wheelchairs?

I don’t care how you get here, just get here if you can

I love that RDA is still wearing the Suunto Vector he wore on the show.

There Asgard that needs to rebuild their race and there still a few “snakes” left and one might be in a Wraith! So please bring it back!!

at least a 2-hour movie of the Stargate sG1 resurgence against the threat of Wiracocha, the God of the Incas that threatens the human race, should be created. It is not an idea!

Would be great to see the series rebooted, I’ve been a fan from the beginning and of all of the series’s. Thing is , however the way things are going in tinsel town, a lot of the characters will most probably be gay. Would be interesting how the dynamics would turn out in a show like this. None the less, BRING IT BACK !!!