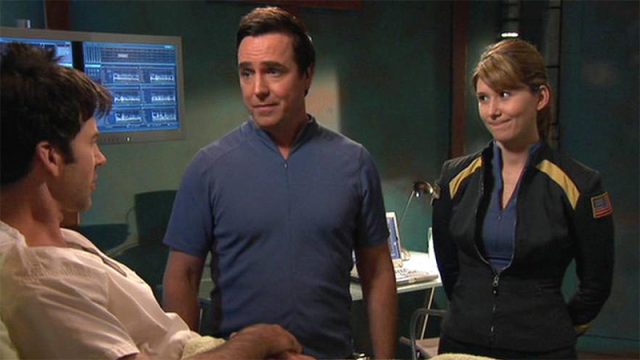 The Stargate franchise is headed back to the stage at San Diego Comic-Con for the third straight year.

July means that it is almost time for sci-fi, fantasy, and comic fandom’s biggest celebration of the year. And this year Stargate’s presence will be devoted to celebrating the fifteenth anniversary of Stargate Atlantis. The spin-off series made its debut in July of 2004.

First up is the official Stargate panel on Thursday, July 18 in San Diego, from 1 to 2 p.m. (Room 7AB at the Convention Center). Writer and executive producer Joseph Mallozzi will be on hand, along with actors Paul McGillion (“Carson Beckett”), Jewel Staite (“Jennifer Keller”), plus some additional as-yet unannounced guests. The group will share anecdotes from the show’s filming, as well as behind-the-scenes footage and a “special Atlantis surprise” for fans. 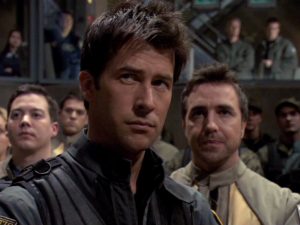 The fun continues Thursday night with an extended event at the Fluxx Nightclub (5:00-6:30 p.m.). The party will be open to Stargate fans, with details still to come from Stargate Command on how to RSVP and get inside.

If you feel torn between the two because you know how long those lines get … well, you’re in luck. Try not to lose your seat after the Stargate panel, because Farscape‘s panel is also scheduled for Room 7AB. Joining Browder and Black will be co-star Gigi Edgley, executive producer Brian Henson, and creator Rockne S. O’Bannon.

The hour between the two will go to Legion M, who will talk about their past and current projects and how fans can get involved in crowdfunding and support of film projects.

Stick with GateWorld for more on the Atlantis celebration this month!

Anniversary after anniversary, but still nothing about a new series…

I can just imagine the pandemonium if Jason Momoa showed up. I just hope he remembers where his first big break happened (baywatch doesn’t count). If it wasn’t for SG:A, Jason would probably be a nobody.

SG Atlantis was the best during the last 2 seasons. Before that, it was meh.

Would love to see a new series, nothing has filled the space left after Stargate universe ended leaving us all dreaming of Destiny. I NEED my sci fi fix like the good old Stargate days!

Legion M has scheduled a few screenings, some parties and panels.
No details on their website but considering Stargate Command is the tag-along here, you’re better of keeping an eye on Legion M’s schedules.

Also, since it’s them organizing these parties, be aware that Legion M members get first dips on tickets.