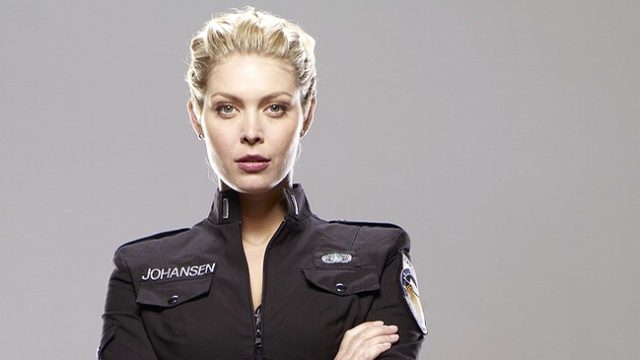 Stargate Universe‘s Alaina Huffman has booked another high-profile genre role, and it’s one we cannot wait to see.

Huffman will appear in a recurring role on the upcoming seventh (and final) season of The 100, Deadline reports. The CW’s post-apocalyptic science fiction drama has been one of the best genre pieces on television in recent years, and will wrap up its run in 2020.

The actress played Tamara “T.J.” Johansen for SGU‘s two-year run. Sci-fi and fantasy fans will also know her as Black Canary on Smallville, and Abaddon on Supernatural. She recently appeared in the 2018 thriller The Perfection (now on Netflix).

On The 100 Huffman will play a character named Nikki, a criminal and former prison inmate who is awakened from stasis:

One of the newly-awakened Eligius IV convicts, Nikki is a bank robber and spree-killer who is both unpredictable and fierce. She will take on an unexpected leadership role, advocating for her people in the complicated new world of Sanctum.

Like Stargate Universe before it, The 100 also films in and around Huffman’s home town of Vancouver, British Columbia.

She joins fellow Stargate alum including JR Bourne (“Martouf”), who had a major recurring role on the series last season as Sanctum leader Russell Lightbourne. Before that Mike Dopud (“Varro”), Huffman’s SGU co-star and on-screen love interest, also had a recurring role as an Eligius convict.

Ayeeee can’t wait for y’all to meet Nikki! I’m definitely falling in love with her and loving meeting #The100 family. #GoodVibes Thanks @cwthe100 @JRothenbergTV for this opportunity ❤️ https://t.co/qJqRTUoWmh