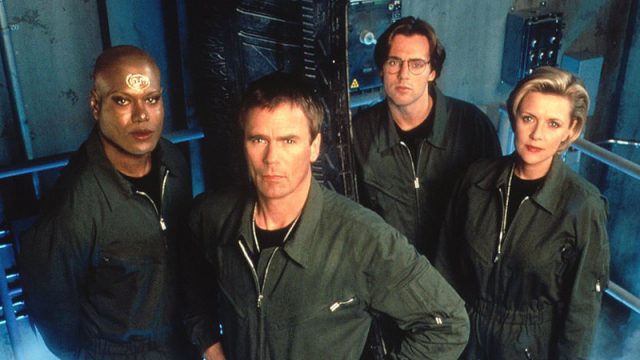 Stargate SG-1 will be streaming on Netflix, just in time for your holiday binge!

The sci-fi adventure series will hit the streaming service (at least in the U.S.) on December 1, according to @NXonNetflix. The verified Twitter account identifies itself as “@Netfix’s home of all things geek,” and covers everything on the streaming service in the science fiction, fantasy, animation, and general “geek” category.

Starring Richard Dean Anderson, Stargate SG-1 ran for ten seasons on Showtime and then SCI FI Channel in the United States, from 1997 to 2007. It spawned spin-offs in Stargate Atlantis (five seasons) and Stargate Universe (two seasons), and was followed by 2008’s direct-to-DVD movies Stargate: The Ark of Truth (which resolved the main story arc from the final two years) and Stargate: Continuum.

SG-1 and its spin-offs have appeared on Netflix in the past (starting back in 2010), but in recent years the show has been limited to Hulu and Amazon Prime in the U.S.

So, to name the elephant in the room … could this be a portent of a new Stargate series on Netflix? We’ve speculated in the past why Netflix might be a good fit for the next Stargate live-action show, as well as the drawbacks that might have. 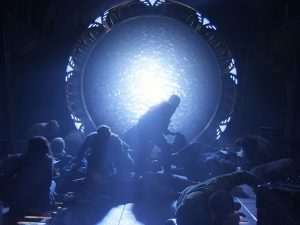 Stargate Universe went off the air in 2011, leaving the TV landscape without new Stargate adventures for nearly a decade now.

It makes sense that, should one of the big streaming services wish to pick up a new and original series, they’d also like to have past entries in the franchise as well. That would help introduce new viewers to Stargate, and to bring in existing fans as well.

For now, at least, it seems that Netflix is not teeing up any immediate plans to launch a new show.

Van Helsing showrunner Jonathan Lloyd Walker retweeted the Stargate announcement, saying: “Long overdue for Stargate to be on Netflix. And… NEW SHOW? That would be epic.” To that, Stargate’s Brad Wright (who is creating a fourth live-action television series) replied, “That would be news to me.”

No word yet on whether SG-1 will make another surprise exit from Hulu or Amazon any time soon. The streaming rights often play musical chairs every 12 to 18 months. Keep your browser locked on GateWorld for the latest!

We’re tracking where the Stargate series and films are streaming on GateWorld’s “Where To Watch” page.

Honestly, I really hope they don’t go with Netflix (if they have any choice in the matter). They are notorious for cancelling shows after 3 seasons, and they also only order a minimal amount of episodes.

Personally, I’d like a 16-20 episode SG show with the longevity of SG-1. Probably won’t happen, but one can dream.

That said super pumped SG1 is on Netflix! This is amazing news for Canadians, since there is no way to watch the show without buying the DVD box set or on CTV’s SPACE network.

I’m also not overly keen on Netflix. The Lost in Space revival for example will end at 3 seasons – a shame as it’s one of the few really well done reboots that retains a nice family friendly approach.

The streamers are more and more looking like wolves in sheep’s clothing we get a little taste but nothing like the types of long lived productions of years past. Oh well, times change i suppose.

Could Gateworld petition Netflix USA to bring SG-1 to Netflix UK&Ireland? We want it too!

I know, I know, Netflix tends to cancel stuff after two or three seasons. But Stargate Universe was supposed to be a five season show. And got cancelled after only two. This means that the Netflix model would be perfect to complete that show. Alternatively, Origins only has one season, so this could be a nice way to buff that show up a bit.