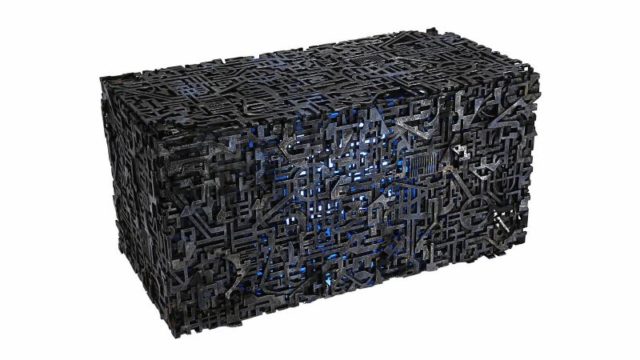 Here’s your chance to own a key prop from the Stargate television franchise … if you’ve got the bank account to pay for it.

The London Prop Store is in the second day of a huge, 2-day entertainment memorabilia auction on December 2, featuring props from countless TV and film productions. Prop Store is auctioning off more than 900 items in total, with a heavy emphasis on science fiction and fantasy productions.

Films and shows are proceeding in alphabetical order, meaning all seven Stargate items will be auctioned today. Today’s items include:

SG-1 discovered this Ancient tablet hidden on Abydos in the sixth season finale, “Full Circle.” It would set them on a search for the legendary lost city in Season Seven.

A piece of Goa’uld technology used to heal injuries in the field. It’s featured in episodes such as “Fair Game,” when Sam uses it to heal Cronus (after Nirrti pretended to try). 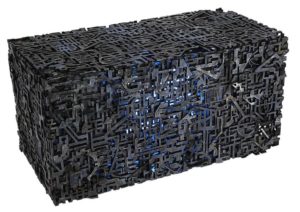 A portable power source developed by the Orbanians (“Learning Curve”), which uses the element naquadah to produce a significant output of clean energy. Earth developed their own naquadah generator technology after studying this device. 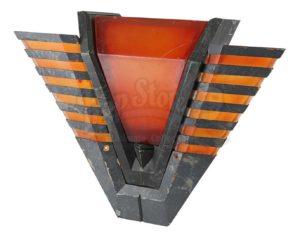 According to the Prop Store listing this is the chevron from the top of the Stargate, with two holes indicating where a hydraulic attachment moved it up and down. Production had two gates: the permanent S.G.C. set at Bridge Studios, and a location Stargate for filming off-site.

A large, spherical explosive device developed by the Goa’uld to harness the power of naquadah as a weapon. Bombs appeared in several episodes of the series, but this one comes from the movie Stargate: Continuum — used by Baal to destroy the Achilles as it transported the Stargate across the Atlantic Ocean.

After discovering a pedestal and communication stones developed by the Ancients for intergalactic communication, Earth reverse-engineered its own portable device. This was brought to Destiny and featured heavily throughout Stargate Universe‘s two seasons.

The Atlantis team met what appeared to be a surviving colony of Ancients in the third season episode “Progeny” … only to learn that the Asurans were, in fact, human-form Replicators. Their hand weapons are seen through the end of their storyline, including the Asurans’ temporary conquest of the city of Atlantis in the mid-season two-parter “The Return.”

Other items on the block over these two days include props, costumes, concept art, and scripts from 2001: A Space Odyssey and 2010: The Year We Make Contact; Alien and its many sequels; Apocalypse Now, The Avengers and the MCU, Back to the Future, Blade Runner, The Fifth Element, Flash Gordon (1980), and Close Encounters; the 1960s Batman TV series and Tim Burton’s Batman and Batman Returns (Jack Nicholson’s Joker Fedora sold for £30,000); Christopher Nolan’s Batman Begins and The Dark Knight; Ghostbusters, The Goonies, Harry Potter, and The Hunger Games; Indiana Jones, James Bond, and Jurassic Park; the original Battlestar Galactica, classic Doctor Who, Farscape (D’Argo’s autographed Qualta Blade!), the Star Wars and Star Trek franchises, and tons more film and TV favorites.

Items range from a few hundred dollars to tens of thousands of dollars, with most items in the four-digits range.

For details on bidding visit the main auction page at Prop Store.

> Stargate: Continuum — used by Baal to destroy the Achilles as it transported the Stargate across the Pacific Ocean.

Across the Atlantic Ocean wasnt it ?