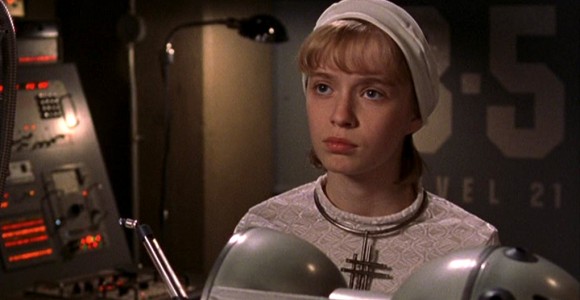 SG-1 discovers a planet where children are used to acquire knowledge for the entire population, then discarded.

An excited Daniel Jackson studies the planet of Orban, a developed culture that has made significant scientific advances in just a few decades, while it took Earth centuries to accomplish the same things. Jackson believes the Orbanians are the descendants of the Teotihuacan, an ancient South American people who vanished around 750 AD.

The S.G.C. arranges an exchange of knowledge with the people of Orban: Teal'c will teach them about the Goa'uld threat, while Merrin, an 11-year-old genius girl, visits Earth to teach Major Carter about the Orbanians' naquadah reactor technology.

Teal'c is asked to provide his knowledge to a young boy named Tomin, son of Kalan, a leader on Orban. The information greatly concerns the people, and they ask for methods to fight the Goa'uld. But soon Teal'c learns that Tomin is gone, and he is asked to speak with a new child. Teal'c and Jackson demand to see Tomin, and discover that the boy is now in an infant-like state. He has gone through the "Averium," an Orbanian ritual.

On Earth, Merrin does her best to instruct Carter on building a naquadah reactor. But she and her people are unfamiliar with even the concept of teaching, or of representing something in an artistic, imprecise way. Merrin rejects O'Neill's suggestion to take a break from her work and have some fun, and proceeds to draw an elaborate collection of sketches depicting the inside of the reactor. These allow Carter to construct a working model.

There is another interesting thing discovered about Merrin. Dr. Janet Fraiser discovers the existence of nanites in her blood stream. General Hammond puts the base on alert, since SG-1's last encounter with nanites almost ended in disaster ("Brief Candle"). Merrin explains, however, that her nano-processors are harmless: she was implanted with millions of them at birth.

The Orbanian society acquires knowledge by selecting a few children – called "Urrone" – and implanting them with nanites at birth, before the brain has fully developed. The nanites act as additional synapses, allowing the children to learn vast amounts of knowledge very quickly. When an Urrone child has reached 12 years of age, his or her nanites are harvested in the Averium ceremony, and one is given to every Orban citizen. The child's knowledge is passed on, but the child is left in an infantile state. They are cared for physically, but not taught or interacted with.

SG-1 finds the practice intolerable, especially after witnessing it firsthand in Tomin. They hold Merrin on Earth against her will, trying to convince Kalan not to harvest her nanites. But the Orbanians do not see anything wrong with the practice, and Kalan comes to Earth to demand Merrin's return.

This prompts Jack O'Neill to, in effect, kidnap Merrin. He takes her to the surface, to a local grade school. Merrin spends the afternoon playing with other children, and painting a picture in art class.

When she returns to Orban and goes through her Averium, Merrin's new experiences are passed on to all of her people. The society is transformed, as children now play in the streets and adults draw pictures. Merrin herself has regressed to mental infancy, but O'Neill remains at her side, willing to get to know her all over again. Now, Kalan promises, all the past Urrone children will be taught in the "old fashioned way."