Browse: Home / 2021 / November / Step Up To The Stargate At Comic-Con Special Edition 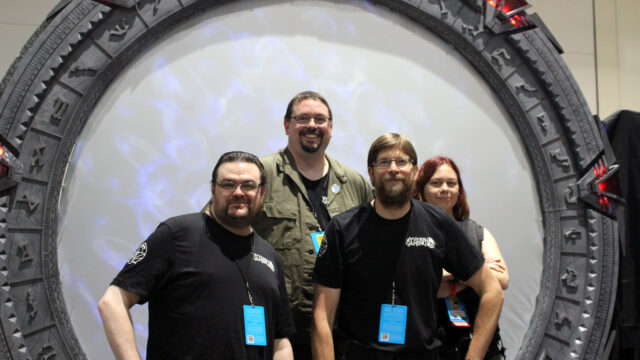 The Wyvern Gaming Team (Credit: Linda Furey)
GateWorld is pleased to sponsor the Stargate track at this weekend’s San Diego Comic-Con: Special Edition! Our fan correspondent Linda Furey is on the scene to share all things Stargate throughout this weekend. Join us in the #stargate channel on Discord.

Being back at a convention after the long pause in live events has been both wonderful and very different. The big draw for Stargate fans here at Comic-Con: Special Edition is definitely the Wyvern Gaming Booth (#2650). They have a stunning Stargate, complete with shimmering wormhole, that was hand-built by Wyvern’s own Wes Walker. It has been a big draw for fan photos, and Wyvern Gaming has had a steady stream of people at their booth as a result.

Wyvern has copies of the Stargate SG-1 Roleplaying Game: Core Rulebook for sale. The book has all the information you need to start playing and writing your own adventures (or “episodes”) for your gaming group.

I do admit to bias, because I have written several episodes for the game’s first season of adventures. But one of the things I particularly love about this game is the fact that Wyvern has set up an area on the the game’s Web site where GM’s (think DM in D&D) can list their gaming group. This is a great place to find groups that accepting new members. A lot of groups meet online using Zoom (if they’re old school like I am), Role 20, Discord or another online method of running a game. In the time of COVID-19 that’s an invaluable tool for gamers. So if you love Stargate and RPGs, you don’t have to let the fact that you don’t have potential players living near you be an obstacle.

I asked Wyvern Gaming’s Brad Ellis about the current delays in shipping the book to locations outside the U.S. Unfortunately, the books destined for Europe are currently tied up in the shipping delays that are affecting so may businesses around the globe. (There is a very good article explaining the causes of these delays published at the New York Times). Ultimately, the root cause of the delays all trace back to the pandemic.

Brad assures me that his team is just as anxious to get those books into the hands of everyone who has purchased a copy as the fans who purchased them are to receive their Core Rulebook. 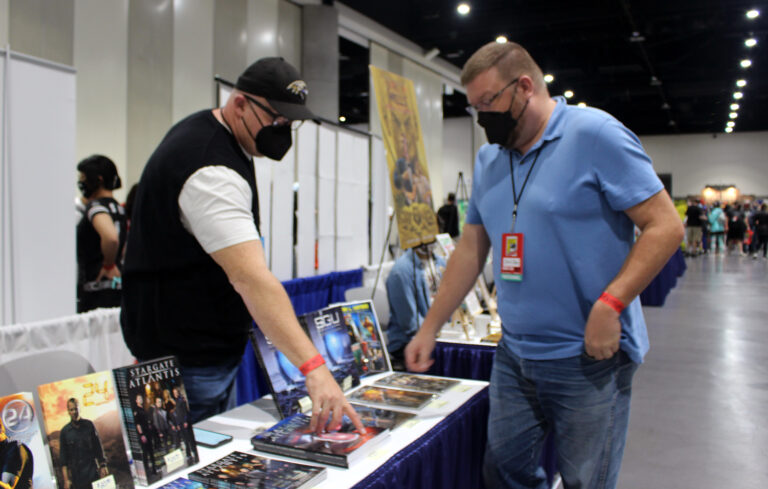 Wyvern Gaming is not the only Stargate presence at Comic-Con! Mark L. Haynes, author of the Stargate Atlantis and Stargate Universe comic books, has a table in Artists’ Alley (MM-12). I have read the Kindle eBook versions of these and really enjoyed talking Stargate with Mark. He is an enthusiastic and knowledgeable fan of all of the Stargate series who has many more story ideas.

We talked about some of the major plot points of his “Back to Pegasus” and “Back to Destiny” comics, which I won’t give away here. I was fascinated to hear his take on what else the Ancients might have known … and what other technologies they possessed that may now be lost to history. 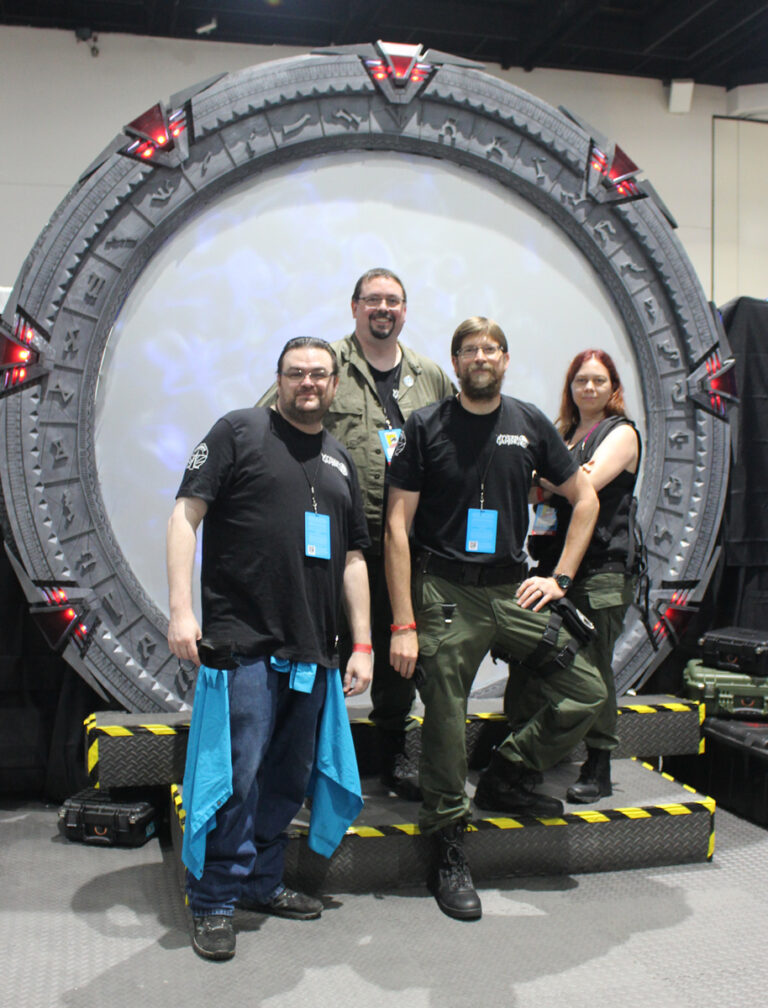 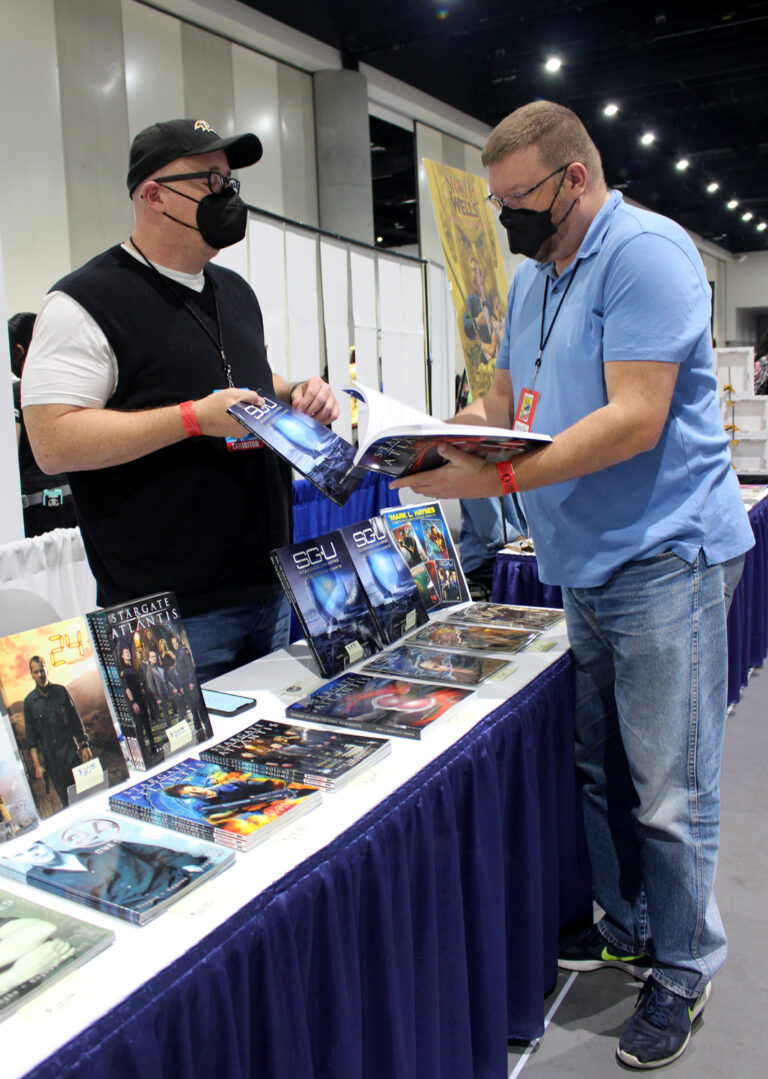 I am Co-Producer of Dial the Gate and writer of several “episodes” of the Stargate: the Roleplaying Game. I also hold a regular Zoom chat (AKA: Gate Gab) for Stargate fans. Join the Stargate Chat Facebook group to learn more. 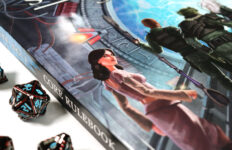