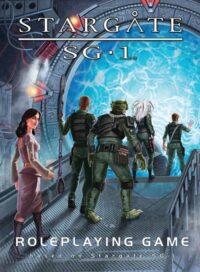 The new Stargate Roleplaying Game lets players explore the galaxy and aid in the fight against the Goa'uld System Lords. The core rulebook contains all the information needed to create a character and join the Stargate Command (S.G.C.). Players will choose from a set of playable races and classes as they learn the skills, feats, equipment, and technologies needed to make their character thrive as an SG team member. The book also covers how to be a "Gate Master" (GM). In the game, Stargate Missions are handed down from Stargate Command. Players may be asked to capture a point of interest, explore new worlds, retrieve important artifacts, rescue important VIPs, or assassinate/capture high-value targets. Stargate Missions will launch the Living Campaign that will allow the players’ characters to advance through the ranks of the S.G.C. Through an online system, players can track their character’s progression, earn unique items, and become a legend within the S.G.C. From Wyvern Gaming

New to the Phoenix Program, you have been selected as a recruit for training. If all goes well, you may graduate to become a Phoenix team member to go off-world and explore the galaxy. Are you up for the challenge? A three-hour “episode” for level 1-4 characters of the Stargate SG-1 Roleplaying Game.
1.02 - "Watershed"