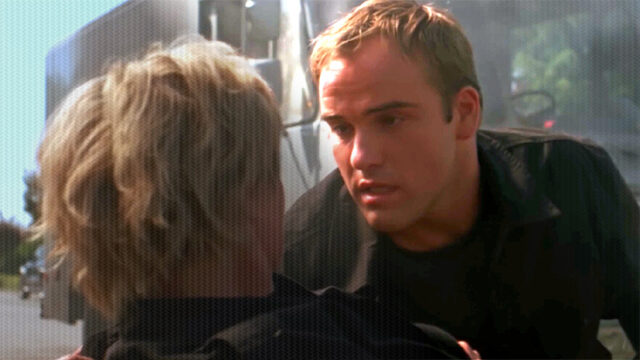 When actor David DeLuise made his first appearance on Stargate SG-1 back in the seventh season episode “Chimera,” Colorado police detective Pete Shanahan was about to go where no one had gone before.

And so the character of Pete Shanahan was born — not an alien or an ascended being, but just an ordinary and deeply likeable guy from Earth. Pete found himself in a fresh and exciting romance with Sam … but she was awfully secretive about her work doing “deep space RADAR telemetry” inside Cheyenne Mountain. So Pete set about trying to investigate his way into her secret other life.

In this conversation with “Dial the Gate,” actor David DeLuise talks about his role on Stargate, working with Amanda, and how he found out the (not so affectionate) nickname that Sam-Jack shippers had given his character: “Stalker Pete!”

Check out this short clip to hear the story straight from David:

“I didn’t know until I did my first convention,” DeLuise explains. “We went to Paris and did a convention there. … Someone [said], ‘We wanted Amanda not to be with you! We don’t like Stalker Pete.’ And I was like, ‘You’ve named me?!? Stalker Pete? What did I do?'”

He also joked that his character’s story arc was, in the end, ultimately responsible for forcing Sam and Jack to decide whether or not they were going to be together.

“Even to the shippers — you’re welcome,” he laughed.

In the clip David also talks about being a kid on set during the filming of his dad Dom DeLuise’s great comedy classic The Cannonball Run (1981), with Burt Reynolds, Farrah Fawcett, and Jackie Chan.

Watch the video above for the rest of the story! Head to “Dial the Gate” on YouTube for the full, 1-hour conversation with David. And while you’re there, subscribe to GateWorld’s YouTube channel for more Stargate content every week.

“Deeply likable”? The guy goes full stalker in life his first episode and when told she can’t talk about her work goes and becomes a frigging creep. Yeah, no. I know nobody who liked him..

First, let me say I am a Jack/Sam shipper. Until he called his FBI buddy Pete didn’t cross any lines. Was the fact that he took Sam on a date that was crashing an anniversary party a bit on the odd side, yes. Until he ran an illegal background check on her and then followed her to a stakeout he did nothing wrong. Now, David Deluise will say in the interview that if you had the ability to find out what your partner does when they won’t tell you, you would find out. However, as a police detective, he should… Read more »